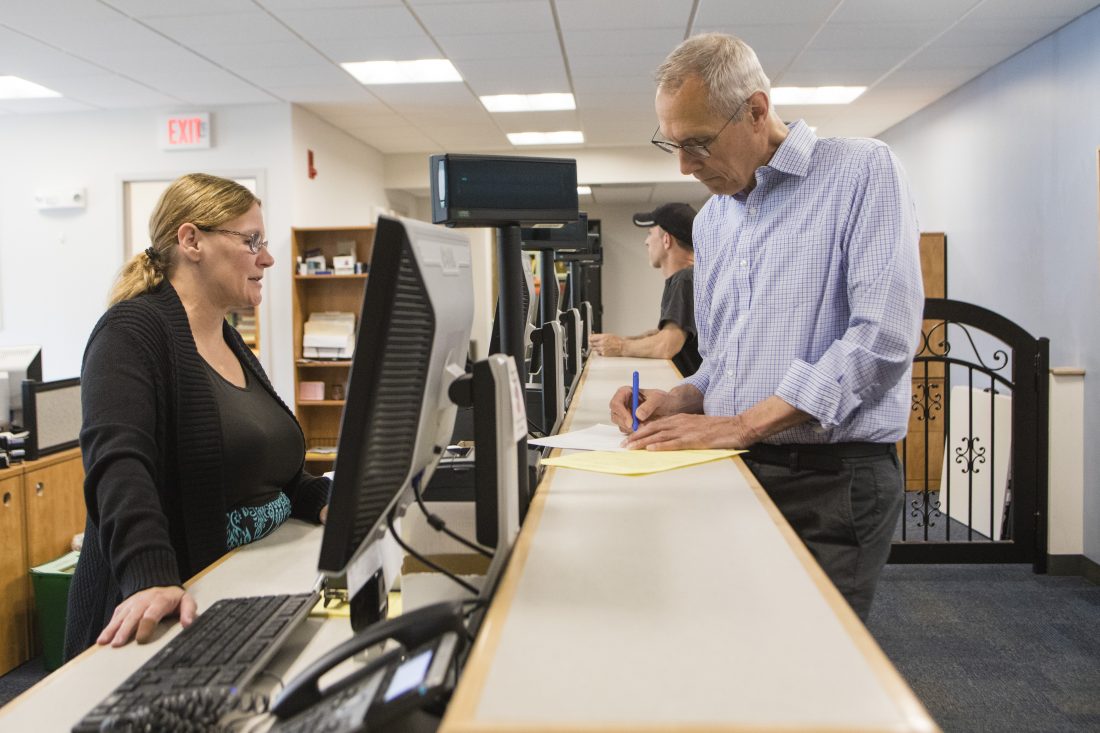 Telegraph photo by MATHEW PLAMONDON After handing over 130 petitions gathered by 60-plus members of the community to City Clerk Patricia Piecuch, Nashua Mayor Jim Donchess is officially seeking re-election.

NASHUA – By submitting 135 petitions at the City Clerk’s Office on Monday, Mayor Jim Donchess officially filed for re-election, seeking his second consecutive term in office – and his fourth overall term.

Opening for petitions for election to the Mayor’s office started at 8 a.m. Monday and the deadline to file is 5 p.m. June 21. City Clerk Patricia Piecuch said that as of Monday afternoon, no other individuals had filed.

Donchess served two terms prior to being elected back into office 2015, as he was mayor for two terms from 1985 to 1992. He believes in the last three and a half years, the city has seen success on many fronts, including education, infrastructure, and downtown development.

“In the last three and a half years, we have added a lot to the tax base, $2 billion by the revaluation. We have paved a lot of roads, 30 miles this year,” Donchess said about what he sees as his achievements.

“We’ve improved education by adding public kindergarten for every 5-year-old in Nashua at all public schools, which was not the case before,” Donchess continued.

“I think we’ve made great, great progress in building housing downtown, more than 500 units in three and a half years and there are more to come,” Donchess added. “I think we’ve done a really good job in activating the downtown, of supporting of the arts community, and we’ve had a great start of beautifying our natural asset of the Nashua River.”

With all those successes, Donchess said if he is re-elected, he will continue working to bring individuals together to do what is best for the Nashua, a city of which he is very fond.

“All of the times I’ve served, it’s been a great honor to serve Nashua. It’s a city that I love very much,” he said. “I know by a lot of people working together, which I always encourage, we can do a lot for Nashua over the next four years.”

Donchess said his plans for improving the city will stay the course with many of the projects and ideas he has worked to implement during this current term, while also working to add more jobs to the city. He also hopes to improve other aspects of the educational system.

“If I am re-elected, I think we can expand the tax base. I think we can add jobs. We can make a big step forward in terms of middle school education with a middle school project, either to renovate or replace Elm Street,” he said about continuing his work into another term.”

“We can pave more roads. I think we can beautify the Nashua River, and add more housing downtown,” he added.

After already putting in more than 11 years of service among his terms in the 1980s and 1990s, as well as his current time in office, Donchess said his love for the Gate City and his aptitude for the job make him want to stay in office.

“I just enjoy the job and I think I’m good at it,” Donchess said. “I love working with people, trying to bring people together to accomplish thing for our community.”

“It’s really a great honor to be in the position,” he continued. “That’s why I’m seeking re-election.”

The clerk’s office will update the public daily at noon and 4:40 p.m., posting on the city website when petitions are submitted and when they are verified.