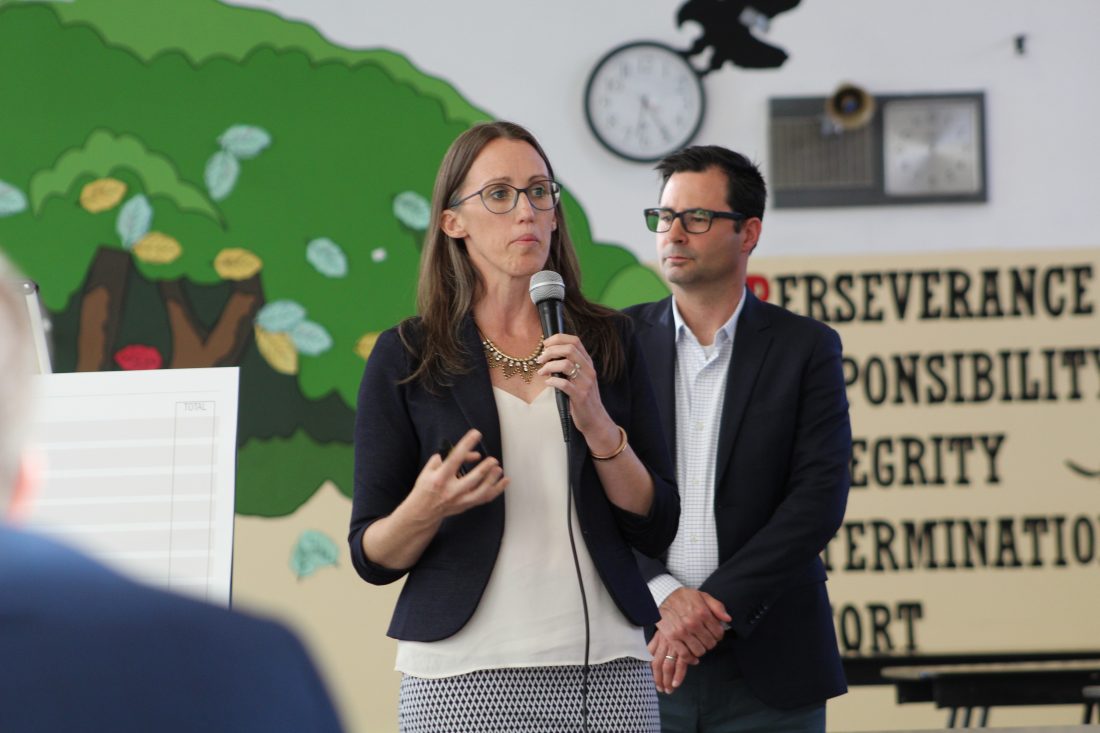 Telegraph photo by GRACE PECCI Lisa Swain and Mark Lee with of Manchester-based Harriman Architecture, the firm that will be designing the renovations for Nashua’s massive middle school renovation project, on Monday discuss the projects with educators, parents, administrators and other community members.

NASHUA – Nearly one year ago, Nashua School District officials said Elm Street Middle School, itself, needed about $50 million worth of work because of “undulating” floors, outdated mechanical and plumbing systems and a lack of athletic fields.

Therefore, the Nashua Board of Education members voted to proceed with a district-wide middle school upgrade plan, estimated to cost about $80 million.

Monday, parents, educators and residents were encouraged to participate in a discussion regarding how to create the best middle school experience possible for Nashua students. The discussion was led by Mark Lee, Lisa Swain and Jamie Ouellette, three architects from Manchester-based Harriman Architecture, which is the selected firm for the middle school renovation project.

The plan so far will include attempts to eliminate portable classrooms at the middle schools – and to make all three middle schools (Elm Street, Pennichuck and Fairgrounds) large enough to educate 800 students each in an effort to balance the student population.

The architects planned to take the feedback given Monday night and attempt to work it into their designs.

Collectively, a group of educators, parents, administrators and other community members believe the phrases “welcoming and secure,” “flexible,” and “equity” should capture the essence of Nashua’s middle schools, moving forward with the massive renovation project.

Through this extensive renovation project, all three middle schools will receive upgrades. City officials are still looking at the best option when it comes to addressing the renovation needs at the Elm Street school.

Options are still being considered for this, specifically whether to renovate the existing school – or to replace it with an entirely new school. The new school could be built on property in the southern part of the city on land officials already acquired. A final decision will not be made until closer to 2020.

This project is still in Phase 1, through which design options and pricing for both options will be determined. Officials are also evaluating the needs at Fairgrounds and Pennichuck schools.

“Tonight is really about listening to the community and what you folks value,” Lee told those who attended the discussion.

He said the steps moving forward include facility analysis, which includes traffic analysis, physical features, and looking at geotechnical aspects. They also are focusing on educational programming, concept design and financial analysis.

Once this is done, they will move to the design process, Lee said.

Lee said the construction, which will be done by Harvey Construction Co. of Bedford, is set tentatively for spring 2021. He said links to information on the project will be posted on the school district’s website moving forward.

Swain discussed some of the best practices they have come across in other schools. These practices include: incorporating natural light, connection to outdoors, art spaces and dedicated space to celebrate artwork or achievements, science, technology, engineering, art and mathematics (STEAM) areas, learning commons and areas for socialization, communication and collaboration.

Swain emphasized the importance of making the schools welcoming so that students believe they belong.

Lee said they will be giving another presentation in the fall as they begin the concept design, which they will be working on this summer.