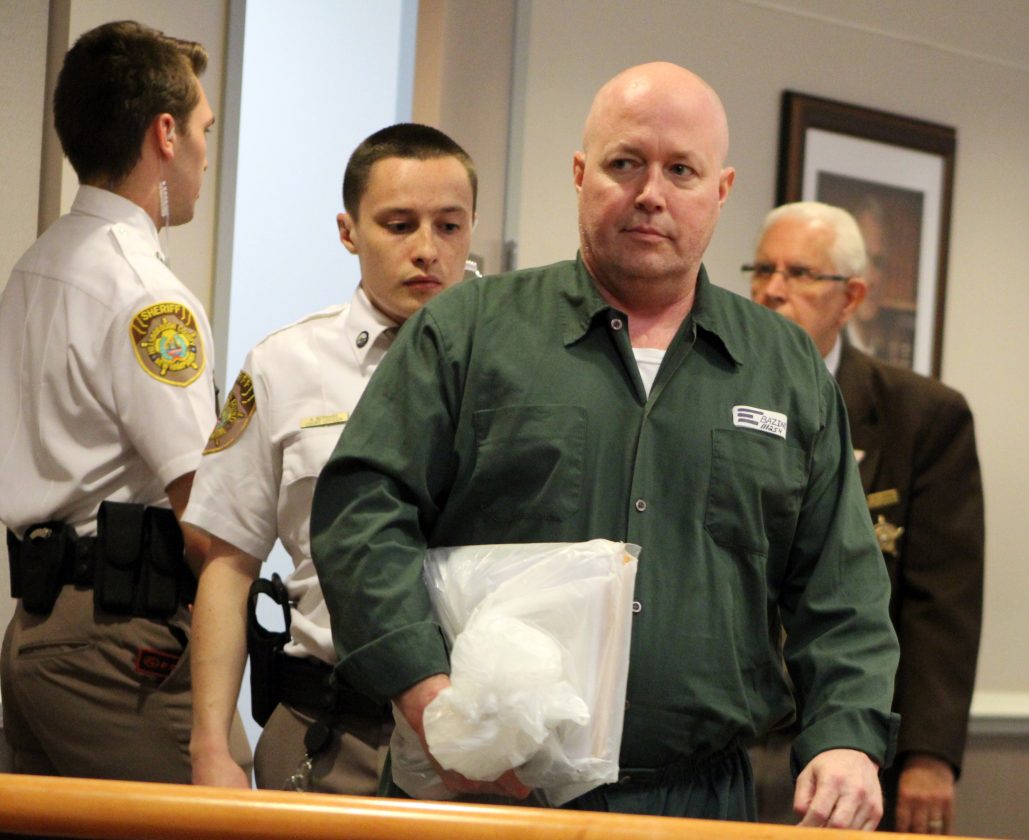 Telegraph photo by DEAN SHALHOUP James Bazinet enters Hillsborough County Superior Court South Wednesday for the hearing on his motion for a new trial. Bazinet was convicted in 2016 of negligent homicide for a 2012 crash that killed his fiance.

NASHUA – James Bazinet, the Massachusetts man serving State Prison time on a negligent homicide charge stemming from a fatal drunk-driving crash in Nashua, was back in court Wednesday to argue for a new trial.

Bazinet, now 54, filed the motion for a new trial, claiming ineffective representation of counsel, meaning he believes his attorneys, Michael Davidow and Steven Rosecan, fell short of the standard for providing an adequate defense.

The negligent homicide charge accuses Bazinet of driving with a blood alcohol content of .267 the night he crashed his fiancee’s Dodge Charger into a tree and stone wall across from 5 Searles Road in Nashua.

His fiancee, Sheryl Laitinen, who was in the front passenger seat, sustained fatal injuries in the crash. Bazinet also suffered serious injuries, but survived, albeit with a lingering brain injury that Rosecan said at the time continues to affect his memory, speech and emotions.

The crash occurred the night of Dec. 1, 2012, moments after the two left a friend’s party at a nearby residence.

A jury convicted Bazinet on the negligent homicide charge in March 2016. He was sentenced about two months later to five to 10 years in State Prison, a term that fell between the 7.5 to 15 years recommended by prosecutors and the two to seven-year term Rosecan and Davidow requested.

Bazinet has served roughly three years, leaving him with about two years of the minimum left to serve.

Wednesday’s hearing crept along slowly, mainly due to the fact that Bazinet appeared pro se, meaning he acted as his own attorney. The prosecutor, Assistant County Attorney Nicole Thorspecken, objected frequently to Bazinet’s questioning of his witnesses, who included Davidow, Rosecan and Bazinet’s daughter, Angela.

Judge Jacalyn Colburn sustained many of those objections, and often found herself reminding Bazinet to “stay focused” while he questioned the witnesses.

A significant portion of Bazinet’s questions to Davidow, who testified first, had to do with the testimony, or lack thereof, of a physician from Massachusetts General Hospital – the Boston hospital at which Bazinet spent five weeks recovering following the crash.

Bazinet seemed to take issue with an apparent decision by Davidow and Rosecan to not call the physician to the witness stand – although, according to Bazinet, the doctor’s testimony would have helped his case.

In response, Davidow told Bazinet they, and Rosecan, “talked about it quite a bit,” and in the end they all agreed that the doctor wouldn’t testify.

Davidow further told Bazinet that his and Rosecan’s defense strategy was based on reasonable doubt, because, Davidow said, “all the other strategies were ruled out.”

On the subject of why Bazinet was called to testify at trial, Davidow reminded him that their goal was “to present you to the jury as a man with no memory … that’s why we put you on the stand,” he said.

Once testimony is completed, Colburn will take the arguments under advisement and hand down a ruling on Bazinet’s new-trial motion in the near future.