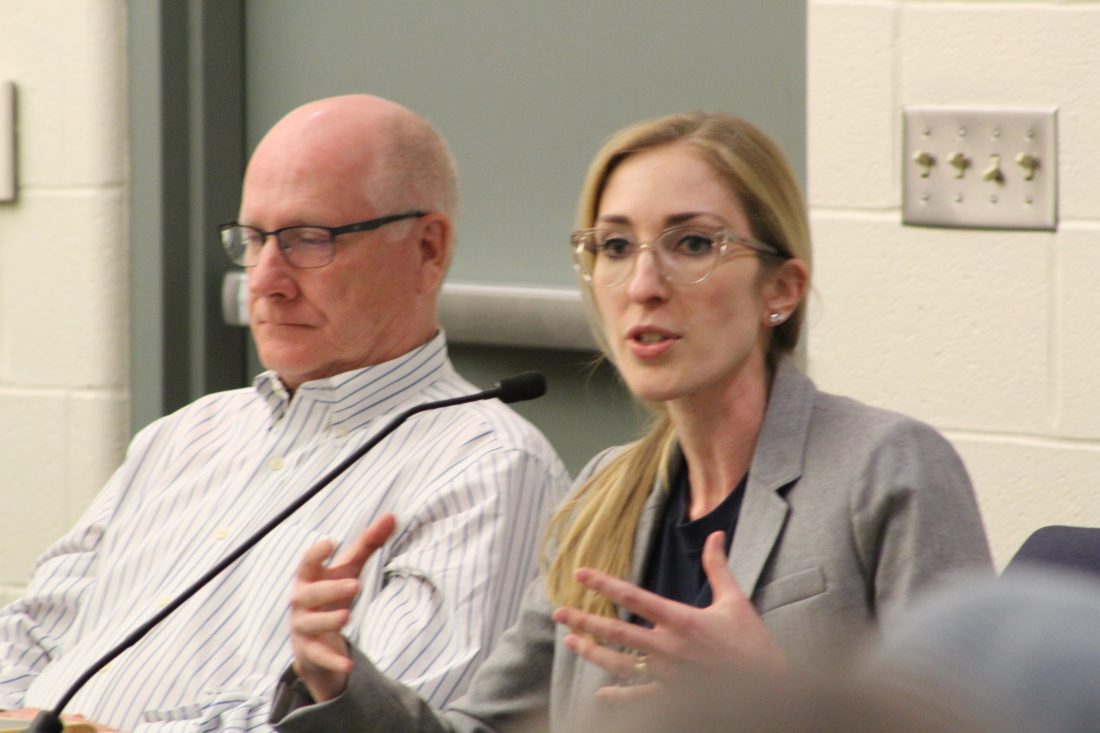 NASHUA – One member of the public accused Board of Education officials of carrying out a “coup” on member Doris Hohensee in requesting her resignation earlier this month, while other residents expressed their desire for her to leave the board, during the Tuesday meeting.

Earlier this month, Nashua Board of Education President Heather Raymond, other members of the board and Superintendent Jahmal Mosley requested the resignation of Hohensee, effective immediately, due to Hohensee’s “behavior as an elected official Raymond cited two separate social media incidents within a week of each other.

On May 3, a student created a post on her personal Facebook page about her personal opinion on the board’s previous approval of the Air Force JROTC Marksmanship Program on campus.

On May 5, a local blogger wrote a public blog on Granitegrok.com, citing the student’s post, but did not identify the student.

Raymond said that after this, Hohensee wrote a comment in response to the blog, which identified the student by name and called on readers to visit the student’s page. Raymond said Hohensee also wrote a second comment agreeing with another user’s statement that the student deserved “heavy backlash” for her post.

According to Raymond, later that evening members of the public visited the student’s page and posted derogatory comments.

Raymond also called for Hohensee’s resignation due to a quote she posted on her personal Facebook account from Lothrop Stoddard, a white supremacist who wrote several books, one of which was considered a training guide for the Nazi regime.

Tuesday, Nashua resident Bob Duffy said Hohensee should be given the right to refute the claims made against her and that it was inappropriate for the request of her resignation be announced publicly first.

Dianne Lothrop said she was there in support of Hohensee and urged her not to resign.

“(Hohensee) has been in the past and still now, the target of a witch hunt by most members of this board, Superintendent Mosley and by the Nashua Teachers’ Union because her views do not match your partisan views. To me, this is despicable and unprofessional,” Diane Lothrop said.

Charles Lothrop said he believed this was a “board of education coup” based on falsehoods and personal animosity.

Hohensee said during the meeting on the matter, “I didn’t do anything that intended any harm on any student.”

“What I did was misconstrued. They all played that I had evil intent. Can they prove it? Are they clairvoyant? Can they read my mind? Apparently they think they can,” Hohensee said.

Nashua School District Superintendent Jahmal Mosley also weighed in on the issue. Mosley said the things he heard during Monday’s meeting made him tremendously upset.

He added, “You have my support kids, to come to any venue public or private to express your feelings of safety. That is not negotiable. That is not a Facebook post, that is who we are. We are here for you. You have the right to be vulnerable.”

Mosley said, “If you are black, white, biracial, gay, transgender, this is your home. If you’re feeling like you can’t go anywhere else and you feel like you can’t fit in, come talk to someone here, we welcome everyone.”

He added, “We have wonderful kids here. They do great things here and it so unfortunate that it gets tied up and bogged down on so many awful things that adults have done.”

Sonia Prince spoke to Dianne Lothrop’s comments about a witch hunt. Prince said this is not a witch hunt, calling the whole matter “atrocious.”

Under Tuesday evening’s new business, the board discussed board member censorship, after The Telegraph’s publication deadline.