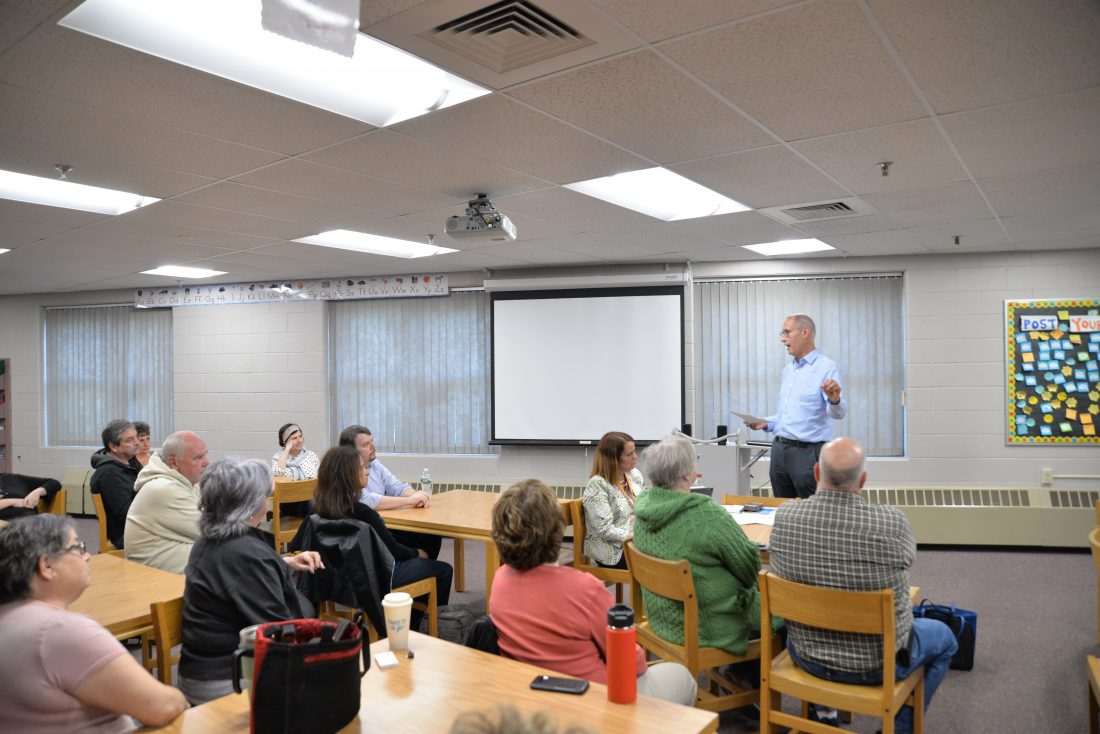 Telegraph photo by ADAM URQUHART Nashua Mayor Jim Donchess on Tuesday speaks to a room full of Ward 7 residents at the library inside Dr. Norman W. Crisp Elementary School during the first of nine town hall-style meetings set for May and June.

“We think we can open this thing in 2023, fall of 2023,” Donchess said of previously discussed plans to build a new middle school for the city.

These meetings offer residents an opportunity to share their thoughts and ideas for their respective wards and the city as a whole, while allowing Donchess to stay informed about residents’ concerns. Donchess will conduct another town hall-style meeting at 7 p.m. today at Amherst Street Elementary School, 71 Amherst St.

Nashua Division of Public Works employees attended the Tuesday meeting to discuss ongoing projects. They plan to pave 30 miles of roadway and seal 31 miles of cracks this year.

Donchess said there is a lot going on in Nashua right now. While looking into middle school upgrades, to furthering progress on the Performing Arts Center, the city is undertaking a number of projects.

Moreover, new jobs have been added to the city, as BAE Systems continues to grow.

He said when talking to employers, one of the top problems discussed is the trouble some have with finding people to fill the available jobs. He said that is one big issue with BAE Systems, and some other larger employers.

Many in attendance had a number of comments, questions and concerns about paving, utilities, sewer and overall infrastructure work. From there, the conversation shifted to more general questions about various hot topics such as the PAC, passenger rail and the new middle school.

“The two alternatives being considered are to upgrade the current school or replace it with a new school on land that the city owns down in the southwest part of the city,” Donchess said of the options for a new school.

Elm Street was built in 1935. Donchess said the preliminary analysis suggests that replacement is the cheaper alternative. However, he said the engineers believe the current building has some structural issues, which could not be corrected with a rehabilitation project.

Additionally, there would be extra costs associated with the rehabilitation, such as having to build a temporary kitchen outside the school walls so children could eat during the day, while the cafeteria gets rehabilitated, for example. He said that alone would cost millions of dollars. Additionally, another key factor is Elm Street does not have athletic fields, which is not consistent with the other middle schools in the city.

“I would emphasis that if the replacement is undertaken, this will be a project that will affect all three of the middle schools because there is some deficiencies in Pennichuck and in Fairgrounds.”

However, Donchess said a new school would probably not be built to the same size as Elm Street, and that there would be additions and improvements to the other two middle schools to allow the buildings to serve approximately the same number of students.