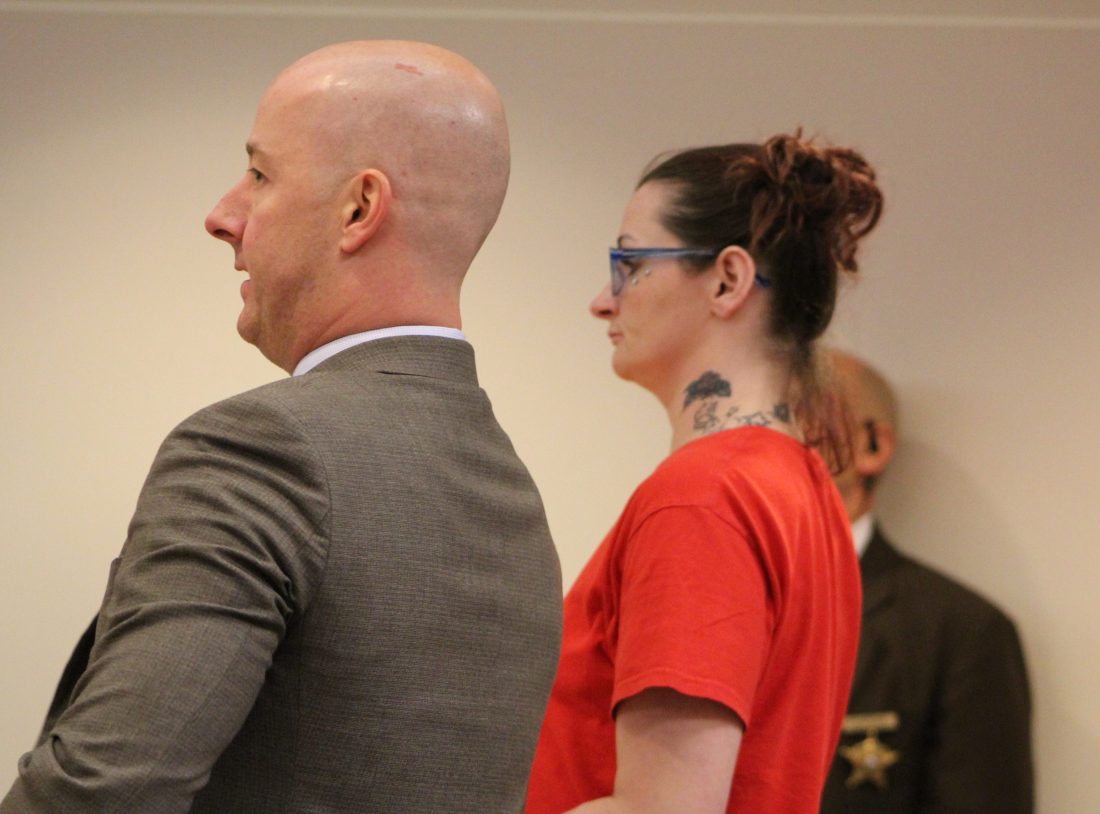 Telegraph photo by DEAN SHALHOUP Krystal Kenny, who pleaded guilty Tuesday to a drug charge as part of a plea agreement, listens to her attorney, Mark Osborne, address Judge Charles Temple during the hearing.

NASHUA – Barring future run-ins with the law, Krystal Kenny on Tuesday settled the last of a series of drug and theft-related cases by entering a guilty plea to one count of possession of a controlled drug.

Kenny, 35, currently in State Prison on a violation of probation charge filed several months ago in Hillsborough County Superior Court-North in Manchester, entered the plea in exchange for a prison term of two to four years, to run concurrently with the two terms she is now serving.

The court agreed to suspend one year of the minimum sentence if, and when, Kenny successfully completes the FOCUS program, or a similar treatment program offered in prison, according to the terms.

Kenny was also given credit for the 212 days she has served in jail or prison, bringing the time remaining on her minimum sentence to less than six months.

Upon entering court Tuesday and joining her attorney Mark Osborne, at the defense table, Kenny began by telling the court why she declined to be transported to the originally scheduled hearing on Monday.

“I apologize for yesterday. I was sick,” Kenny told Judge Charles Temple, who responded with “apology accepted.”

The charge to which Kenny pleaded guilty Tuesday stemmed from her arrest in the early morning of Dec. 24, after police were called to Kohl’s for a report of a woman and a man “acting suspiciously” in the store, according to Assistant County Attorney Brett Harpster.

Suspecting possible theft, Kohl’s personnel checked the changing room the two had used, Harpster said, where they located two bags of a substance believed to be illegal drugs.

Whether the man was arrested is unknown, but the woman, later identified as Kenny, was charged with one count of acts prohibited – possession of a controlled drug.

Confronted with the finding, Harpster said, Kenny allegedly admitted the bags “fell out of her pocket.”

According to Harpster’s account of Kenny’s criminal history, she has 12 convictions on her record, beginning in 2009 with a series of misdemeanor convictions for shoplifting, receiving stolen property, operating after revocation.

In both cases, Kenny received suspended sentences, but two of them were imposed when she was arrested in Nashua on two drug-related offenses, Harpster said.