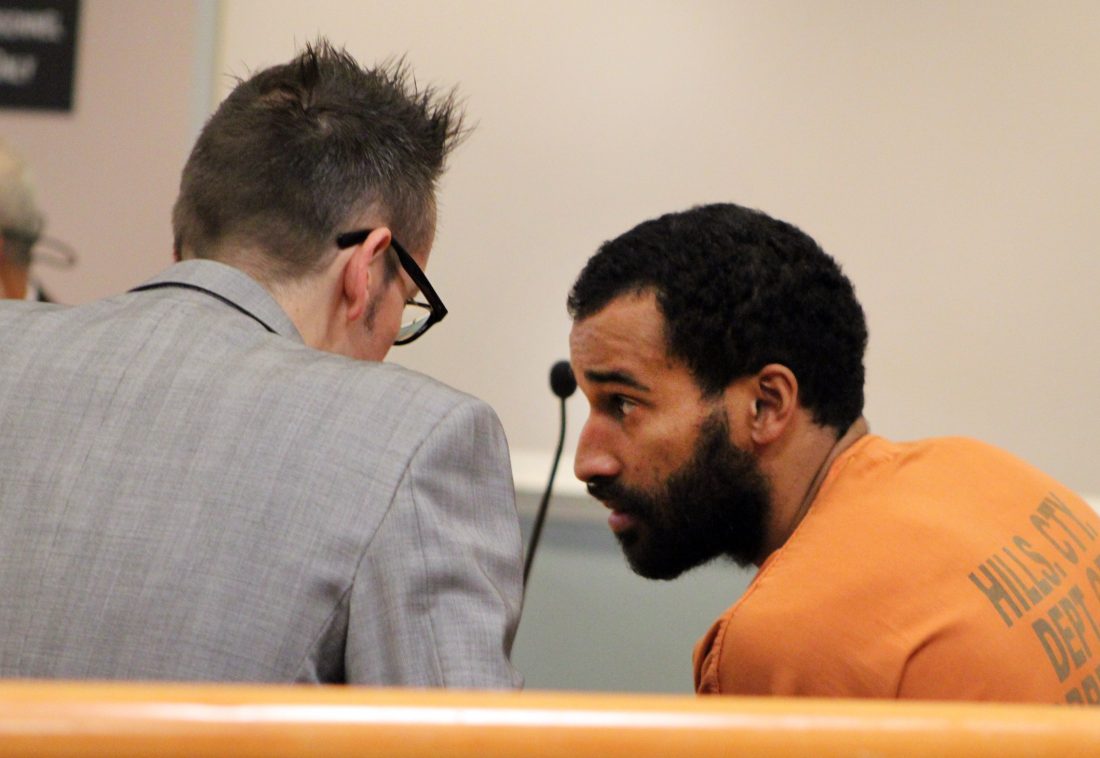 Telegraph photo by DEAN SHALHOUP Joshua Fournier-DeJesus, who is accused of assaulting a man while holding a knife, consults with his attorney, Michael Davidow, during an evidentiary bail hearing Monday in Superior Court.

NASHUA – The prosecutor in the knife-involved assault case of Nashua resident Joshua Fournier-DeJesus, who is accused of punching a man while holding a knife on May 10, said in court Monday she is filing two new felony charges, while replacing another felony charge with a differently-worded version.

Fournier-DeJesus, 31, now faces five charges stemming from the early-morning incident, much of which was captured on cellphone video and security surveillance footage from in and around a pizza shop at the corner of Main and West Hollis streets.

Assistant County Attorney Nicole Thorspecken, at Monday’s evidentiary hearing for Fournier-DeJesus, presented to the court the newly-worded felony charge of first-degree assault, which states Fournier-DeJesus allegedly “knowingly caused bodily injury (to the alleged victim) by striking him with a knife.”

It replaces the original first-degree assault charge, which Thorspecken dismissed.

As for the two new charges, both are felony counts of second-degree assault. Fournier-DeJesus also faces two misdemeanor counts of simple assault, with which he was charged upon his arrest.

At issue in the case, beginning with Fournier-DeJesus’s initial bail hearing on May 13, is whether enough probable cause exists to sustain the first-degree assault charge, and therefore support the prosecution’s argument that because Fournier-DeJesus was holding a knife when he allegedly punched the man, the knife struck the man in the head, causing a laceration, and also lacerated his ear, Thorspecken said.

“I don’t think it matters if it was ‘just a punch,’ because the knife went through his ear,” she said. “He did that on purpose … I think that is (sufficient) probable cause. It is possible to punch someone and stab someone at the same time.”

Attorney Michael Davidow, who represented Fournier-DeJesus at Monday’s hearing, countered by telling Judge Charles Temple that his client has “an alcohol problem” for which he needs, and welcomes, treatment.

“I see this as a ‘but for’ crime – it wouldn’t have taken place but for the alcohol,” Davidow said, noting evidence that Fournier-DeJesus was intoxicated at the time.

He asked Temple that his client be released on personal recognizance bail upon his acceptance into a 28-day residential treatment program.

“I would ask the court that this process be started,” Davidow said of getting Fournier-DeJesus admitted to a program.

Thorspecken, meanwhile, said while she understands Fournier-DeJesus “has an alcohol problem, I don’t think alcohol alone caused his (alleged) behavior that night.

“He knew exactly what he was doing,” she added.

Temple, who stepped down from the bench to join the attorneys at the prosecutors’ table in order to watch the cellphone video of the incident, studied a couple of segments closely before issuing his ruling on bail.

“The video shows probable cause exists to support the first-degree assault charge,” Temple ruled. “It shows you knew what you were doing … you told (the alleged victim) what you were going to do and you did it,” he said, referring to things Fournier-DeJesus allegedly said.

While Temple denied Davidow’s request for personal recognizance bail, telling Fournier-DeJesus that releasing him from jail “would endanger the public and yourself as well,” he did leave the door open for future consideration of PR bail.

“It’s very hard to assess without an evaluation,” Temple said, referring to personal recognizance bail so Fournier-DeJesus could enter a treatment program.

Therefore, “the court will consider PR bail, if a 28-day program is recommended after an evaluation.

“I will not release you if there is no treatment program in place,” Temple told Fournier-DeJesus.