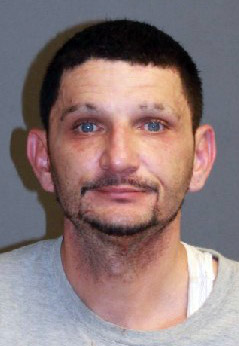 NASHUA – Salem police officers called to a disturbance at a town coffee shop during the weekend ended up arresting a Massachusetts man – but not for anything to do with the incident.

Instead, the officers took into custody Kennth Gallant, a 41-year-old Haverhill man, on warrants that Nashua police had issued several months ago in connection with a series of fraudulent bank transactions that allegedly took place “at different financial institutions within Nashua in June 2018,” police said.

After arresting and booking Gallant, Salem police released him to Nashua authorities, who then charged Gallant with five felony offenses and transported him to Valley Street jail to await Monday’s arraignment.

The charges include two counts of theft by deception, felonies, and three counts of forgery, felonies.

Assistant County Attorney Brett Harpster, the prosecutor at Gallant’s arraignment, asked Judge Jacalyn Colburn to set bail at $5,000 cash or surety, describing Gallant as a flight risk with “no ties to New Hampshire” and an alleged history of failing to appear in court in cases in Massachusetts and Maryland.

However, attorney Sarah Amorin, who represented Gallant at the hearing, asked Colburn for personal recognizance bail. In doing so, she said he never received notice of the Massachusetts court date he is accused of missing because the court mailed the paperwork to an address he’d moved from some time ago.

Further, Amorin said, Gallant is currently in substance use disorder treatment, and is “trying to take his treatment to heart” and succeed.

Gallant agreed to sign a waiver of extradition, Amorin added, denying the state’s assertion he is a flight risk or presents a danger to himself or others.

Agreeing with Amorin that Gallant could very well have not known about the Massachusetts hearing because the notice was sent to an old address, Colburn granted Gallant personal recognizance bail on the condition he continues substance use disorder treatment and remains on good behavior.

According to Nashua police, detectives investigating the reports of forged checks eventually identified Gallant as their chief suspect.

They accused him of “obtaining more than $5,000 in cash” through the alleged fraudulent transactions during June 2018.