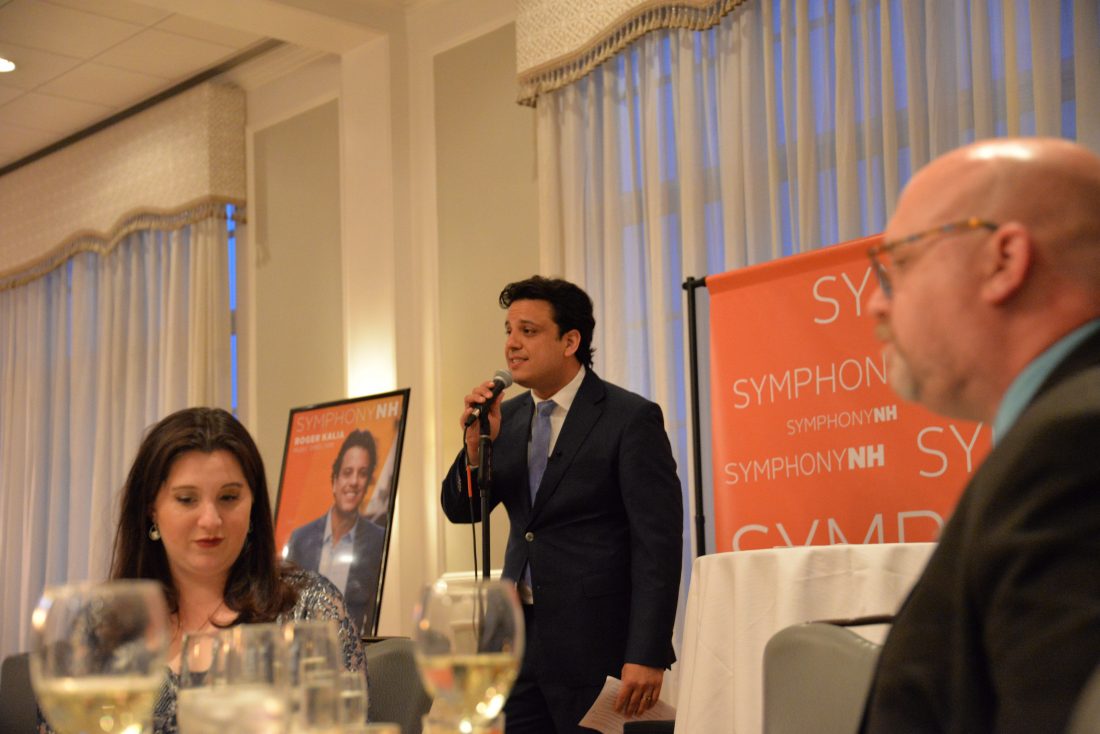 Roger Kalia, 34, will fill this role, and aims to lead the symphony into the 100th anniversary, which is coming up in 2023. In the 96th year, he will conduct his first concert of the season in October. Tuesday night, he was basking in the spotlight as the symphony announced he is coming to the community. He said to be able to work with such a dedicated, talented group, such as Symphony NH is really an honor and a privilege.

“For me, really this next year is all about getting to know the community, and getting to know what people want — what people want to hear, what type of collaborations they want to see,” Kalia said. “My whole philosophy is, the concert should be like an event. The experience needs to begin the second you walk through the door, and it needs to continue long after the concert has ended.”

He also has ideas he is considering, such as implementing activities in the lobby before an event or post concert receptions or talk-backs for example. He also wants to bring in more collaborations, which may include visual elements, video, and nonmusical collaborations with actors or poets.

As a young conductor, he said one of his goals with Symphony NH is to not just reach out to young people, but all different kinds of people from Nashua and beyond.

“I love to work with people,” Kalia said. “As a conductor, you’re a teacher, you’re constantly bringing people together through music.”

He said he would love to make every concert accessible, innovative and relevant to the community. He said a big part of that is showcasing the full breadth of the orchestral repertoire.

Kalia has a lengthy resume under his belt, and aside from taking on this position, he is also currently serves as Music Director for Orchestra Santa Monica, Lake George Music Festival (New York), and the Pacific Symphony Youth orchestra (California).

“It is truly an exciting time in the history of Symphony NH to be welcoming a new music director,” symphony Executive Director Marc Thayer said.

However, prior to conducting, he specialized in playing the trumpet. He grew up on Long Island, where he completed his early music training. It was not until his freshman year of high school that he first heard an orchestra perform. As a young musician in elementary school, he was really influenced by Louis Armstrong, and remembers how his grandfather used to play his records at home.

“When it came time to choose an instrument, I chose the trumpet because I just remembered those recordings,” Kalia said.

At just 16, he went on tour with his youth orchestra, The Metropolitan Youth Orchestra of New York. During that tour, he played in eight different cities in China.

“This totally changed my mindset about orchestral music, playing with such great musicians in these amazing concert halls, and from that point on, I said I want to go to school for music,” Kalia said.

He has conducted and programmed a variety of repertoire over the years such as the works of Tchaikovsky, Beethoven and Mahler. He even did a collaboration with actor Jack Black.

Kalia was chosen after this 18-month search, which included nine other national and international candidates, including conductors Lidiya Yankovskaya, Eric Garcia, Sameer Patel, Scott Parkman, Thomas Heuser, Enrico Lopez-Yanez, Stefano Sarzani, and Yuga Cohler — who have all led the orchestra in concert. In the end, the Search Committee, comprising musicians, trustees and staff, and guided through the search process by industry expert Henry Fogel, all unanimously selected Kalia after the former music director for the symphony was fired. Jonathan McPhee was the former music director from 2008 to 2017, and is suing Symphony NH in federal court in Concord for wrongful firing, contending he was fired after raising concerns about how officials handled thousands of dollars.

Symphony officials are glad to have found an artist who matches their passion, professionalism and dedication of their players.

“As an organization, we strive to grow and excel, and we looked for a music director who can keep us on the path of innovation and creativity we began almost 96 years ago, and inspire us to even higher heights,” President of the Board of Trustees Dr. Robert Oot said.

Moreover, for Kalia, an important aspect of taking on this role is personal interaction with the audience.

“I could conduct and move my arms and create some amazing music, but that doesn’t matter if you’re not connecting with your audiences,” Kalia said. “So, for me, it’s about not only conducting the music, but also removing that invisible barrier between the stage and the audience.”