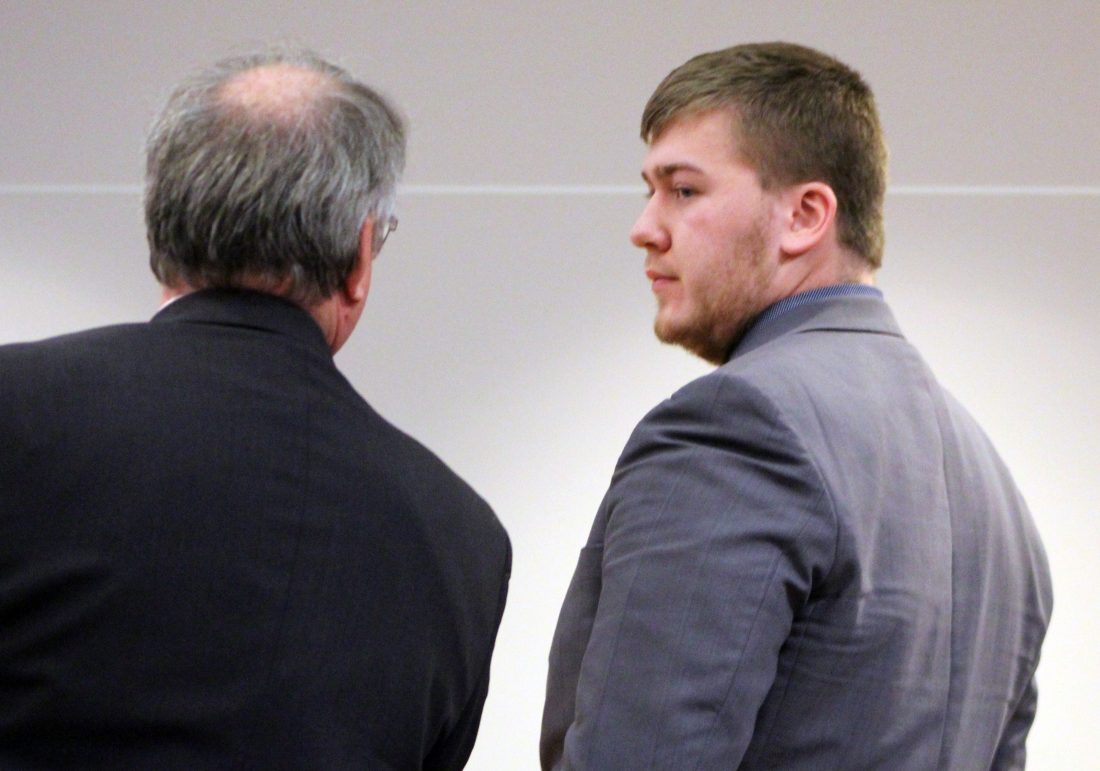 Telegraph photo by DEAN SHALHOUP Reide Klinger, right, pleaded guilty Monday to two misdemeanor simple-assault charges as part of a plea agreement that dismisses several felony charges accusing him of sexually assaulting a woman last year. He confers with his lawyer, Attorney Kevin Buchholz, during the hearing. He will be sentenced in June.

NASHUA – Prosecutors in the case of former Hudson resident Reide Klinger, who last summer was indicted on several felony sexual assault charges, have agreed to a plea deal allowing Klinger to plead guilty to two misdemeanor offenses and go to jail for two months.

Klinger, 21, whose address at the time of his arrest was 100 Saint Anselm Drive, Manchester, indicating he was a student at Saint Anselm College, entered the guilty pleas at a Monday morning hearing in Hillsborough County Superior Court-South.

He will next appear in court for the sentencing portion of the hearing, which Judge Charles Temple scheduled for 9 a.m June 24 in the Nashua court.

That leaves Klinger with two months to serve in jail. The sentences are consecutive with each other.

Other conditions of his sentence prohibit Klinger from having any contact with the victim, who was in court for Monday’s hearing and plans to also attend Klinger’s sentencing.

Battaglia said the woman will present her victim impact statement to the court at the June hearing.

Battaglia and the woman met numerous times “and talked extensively” about the plea agreement, which she supports, Battaglia added.

The series of offenses with which Klinger was initially charged include four counts of aggravated felonious sexual assault and two counts of second-degree assault, all felonies, and one misdemeanor count of sexual assault – aggravating circumstances, according to the indictments the grand jury handed up in August.

The original indictments accused Klinger of sexually assaulting the woman while she was sleeping or pretending to be sleeping, blocking her mouth and pinching her nose, causing impeded breathing, and coercing her to perform a sex act upon him.