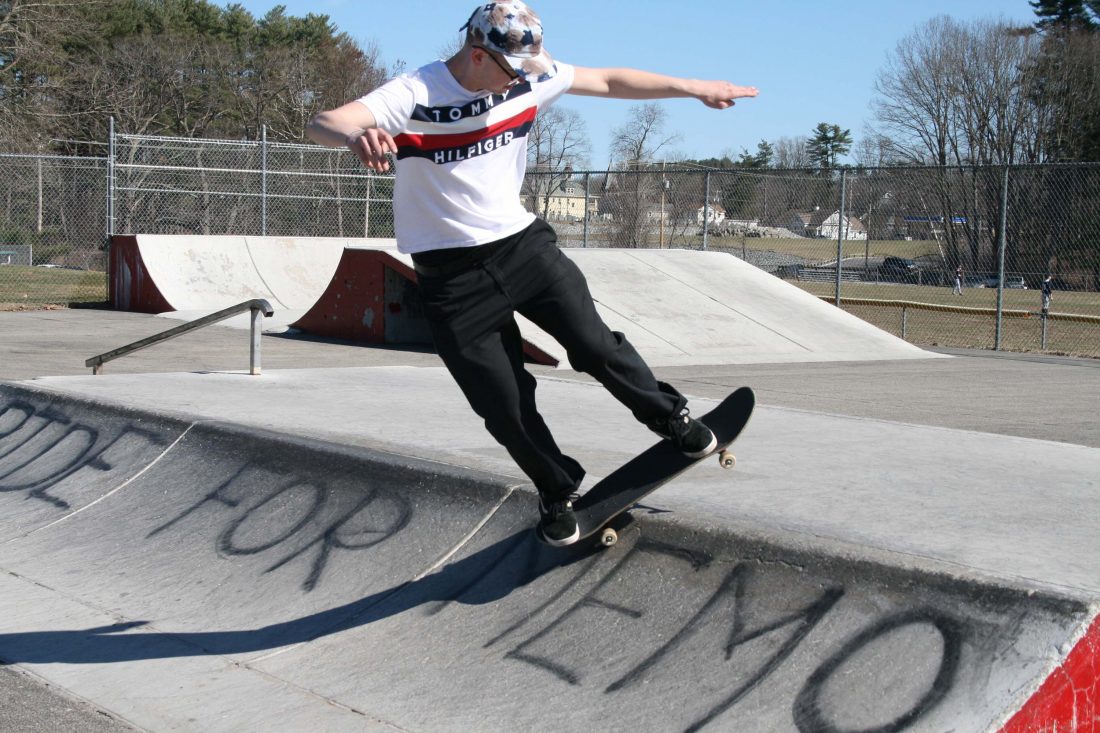 Photo by KATHY CLEVELAND A skateboarder skates over an informal memorial to Brandon “Memo” Kluz at Keyes Memorial Park in Milford.

He spent “many, many hours there – after school, weekends,” starting when he was about 10, his mother said.

Brandon was 23 when he was killed last November at a party in Amherst after someone reported to be a party crasher allegedly pointed a gun at his chest and pulled the trigger.

Now skateboarders, with the help of the Milford Recreation Department and the Milford Lions Club, are getting together to make improvements to the park in his memory, and selectmen recently gave them the OK after Derek Mossey, a skateboarder and friend of Brandon’s, explained the project’s three phases.

First they plan to make repairs to the 18-year-old facility, and next year they want to build a new park element, a roughly 40 by 50 foot depression in the southwest section, called a bowl, as a memorial.

“I grew up with the skatepark and Brandon is a huge part of that,” said Mossey showing the board sketches of what it could look like. He called the park a vital park of the community and one of the town’s most used park areas.

Selectmen were encouraging. “It will be something great for kids coming after you,” said Chairman Gary Daniels.

Monica said she originally wanted the memorial to be benches and maybe a tree, but the bowl “is a fabulous idea,” she said as she went over the plans with Mossey and

Recreation Director Arene Berry last week. There is already $15,000 in the bank from donations that started coming in after Brandon died.

“I am very proud of him,” she said. “I don’t know how he reached so many people.”

The third phase of skate park improvements might include upgrades like a seating area and an awning for shade and shelter, Monica said.

No taxpayer money will be used for the projects. The Lions Club, which built the park around 2001, is a nonprofit and contributions are tax deductible.

Repair work will begin this spring, and Mossey said they want to start building the bowl in the spring of 2020.

The Kluz family’s TD Bank is the Brandon “Memo” Kluz Memorial Fund. Donations can also be made through the Milford Lion’s Club Charities, making it tax deductible.