Year in jail for Hudson man in 2017 purse-snatching 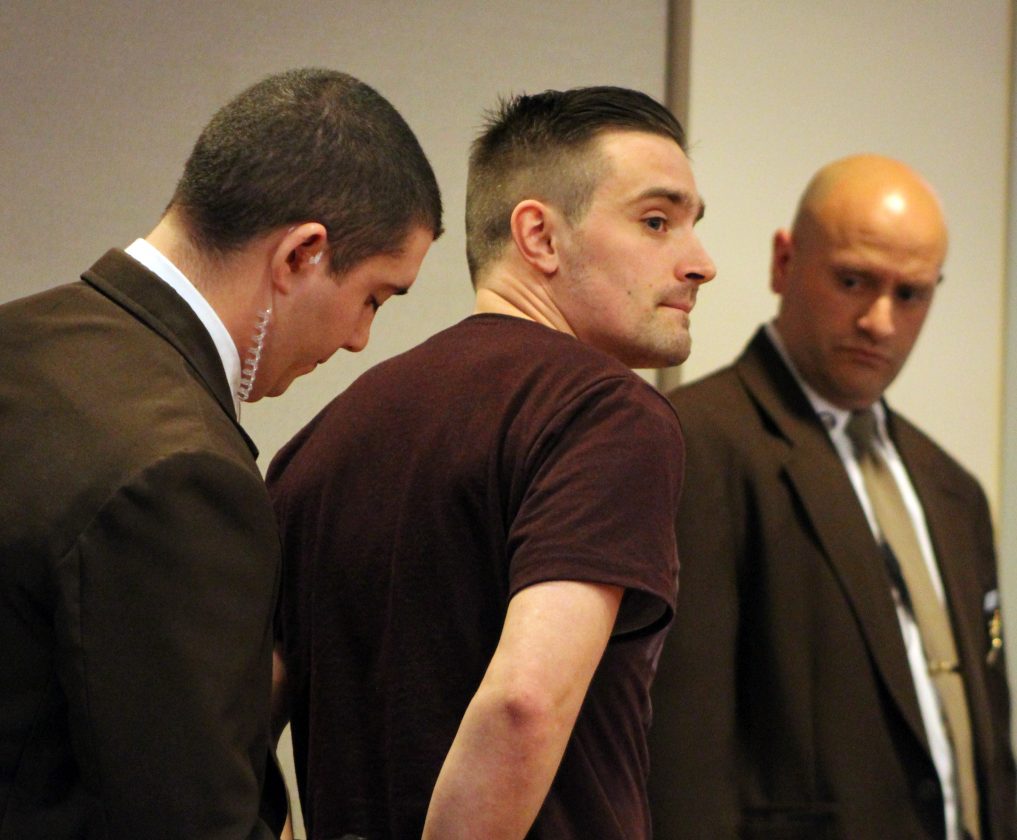 Telegraph photo by DEAN SHALHOUP Court officers take custody of Bryan R. Cook following a hearing Friday at which he pleaded guilty to robbery and reckless conduct in exchange for a 12-month sentence in jail. The charges stem from a 2017 purse-snatching in Hudson.

NASHUA – The woman whose purse Hudson resident Bryan R. Cook snatched away from her back in the fall of 2017 “vividly” remembers the incident, she said in a statement read in court Friday, and hopes Cook will “always be looking over your shoulder” in jail – just as she has been doing since that day.

“I wish you no mercy where you are going,” the woman wrote in the statement, which Assistant County Attorney Lisa Drescher read on her behalf.

The woman, who attended the hearing but opted not to address the court, referred to Valley Street jail, where Cook, 27, will be spending the next year, minus two days of time already served.

The sentence is part of a plea agreement Drescher and Cook’s attorney, Marc Gouthro, reached in the case.

Cook agreed to plead guilty to one count each of robbery and reckless conduct, both felony offenses, and to enter a plea of “true” to a violation of probation charge, in exchange for the jail term, along with orders to pay $600 restitution to the woman and to serve 2 years of supervised probation beginning upon his release from jail.

Judge Jacalyn Colburn, who accepted the agreement and imposed the sentencing order, addressed Cook before issuing the order.

“What a bold, bold, and reckless thing you did,” Colburn began. “Any number of people could have been hurt as a result of it.

The charges stem from Cook’s apparently sudden, violent theft of the woman’s purse in the area of the Walmart on Lowell Road in Hudson on Nov. 7, 2017, according to court documents and statements at the hearing.

In fleeing the scene in his car, Cook reportedly drove over raised, grassy islands in or near the store parking lot, causing a blowout in at least one of his tires.

Police who responded to the reported purse-snatching located the vehicle, which was registered to Cook’s father, Drescher said. When the officers located Cook at his residence, according to Drescher, he admitted to “driving the car over a lawn,” but denied he was involved in a purse-snatching.

Meanwhile, the victim said in her statement that she’ll never forget “the day you had the nerve to drive off with my purse, which contained pictures of my loved ones and hard-earned money,” which was esimated at $300.

The episode left the woman “ashamed, embarassed … (because) I’ve always been so cautious,” she wrote in the statement.

Gouthro, Cook’s lawyer, told the court his client “was dealing with severe drug addiction at the time these incidents occurred.”

But Cook immediately “sought treatment,” Gouthro added, and “has been sober ever since.

“Not that it’s an excuse, but it puts it into context,” he said.

Most recently, Cook, after stints in residential treatment and transitional housing, has been living independently with his two children,” Gouthro said.

Cook also briefly addressed the court, beginning by acknowledging “I’m not a good public speaker” before admitting he’s “ashamed … appalled at what happened.

“I’ve come a long way since, but that doesn’t make up for it,” he said, referring to the crime.

Cook said he hopes the settlement of the case “can get (the victim) some closure … bring this to an end.

“I’m very sorry about what happened,” he added, glancing toward the woman, who sat in the front row of the gallery accompanied by a man.

Colburn, meanwhile, credited Cook for his decision to promptly seek treatment for his addiction.

She urged him to “take seriously” his probation, and “toe the line” once he’s released from jail.

“If you’re struggling, you need to ask for help, before you go do something stupid,” Colburn added.