Teaming Up: Company works to mold an industry-to-school partnership 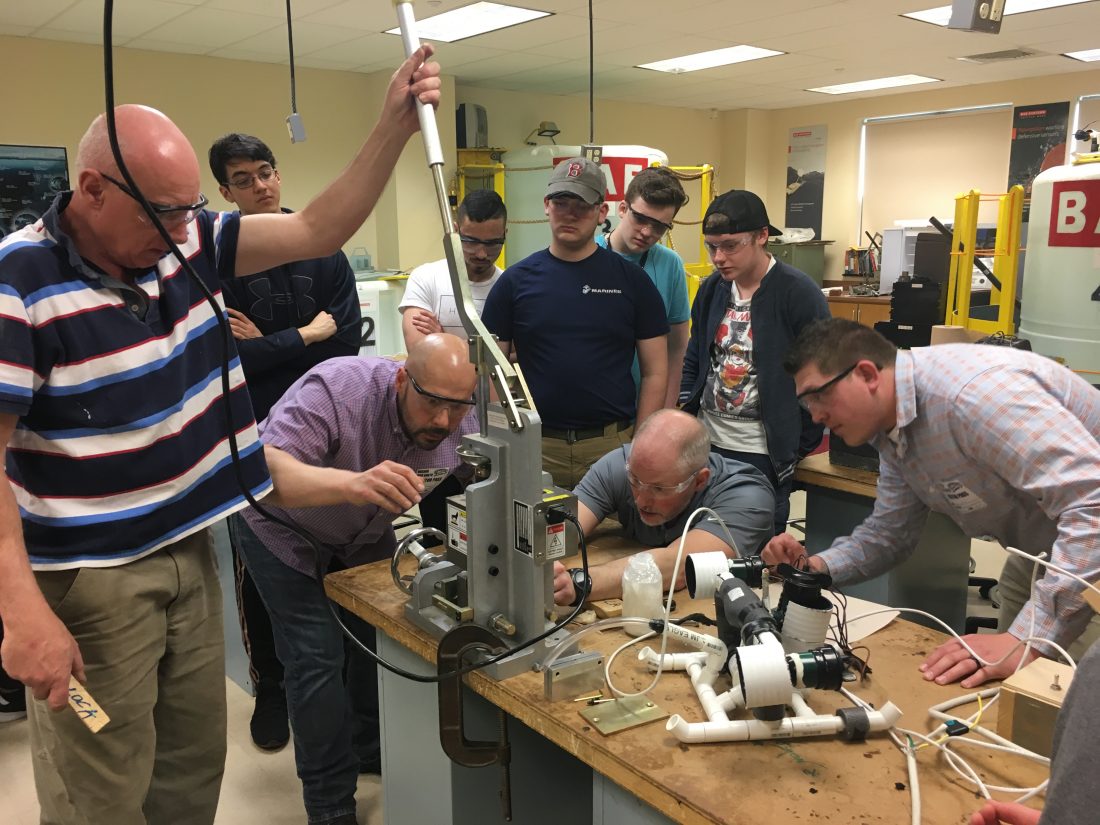 Courtesy photos Whelen Engineering representatives visited the a Marine Robotics class at Nashua High School North on Thursday to discuss with students the aspects of working in manufacturing. The company, based in Charlestown, has been working with the Nashua Technology Center Marine Robotics class to develop a steel mold that would allow the students to make plastic propellers for their robots.

NASHUA – A team from Whelen Engineering, a company that designs and manufactures audio and visual warning equipment for automotive, aviation, and mass notification industries worldwide, has been working with the Nashua Technology Center’s Marine Robotics class to develop a mold that will allow the students to make plastic propellers for their robots.

machine through a grant, but officials still needed a mold for plastic. The price they were quoted was what Bastoni described as “cost-prohibitive.” The total production would have been about $8,000.

Originally, students were creating propellers with a 3D printer, but thanks to Whelen, they will be able to make them out of a plastic injection mold.

Bastoni said the goal is to get the total cost of the robots down to $40. While they keep the costs low, they also want to ensure it will meet a high level of quality.

Months ago, Bastoni and other educators went to Whelen to discuss educational opportunities, Whelen Tooling Manager Jim Putnam said. The company has a program with Stevens High School in Claremont and hosts a manufacturing class at its facility in Charlestown.

A few months later was when Bastoni reached out and asked for help, hoping they could make the mold cheaper. Company representatives took all the measurements and created the mold for free.

“I firmly believe that in terms of high school kids, you got to give them something that’s interesting,” Putnam said. “Whelen has always been a strong supporter of getting kids interested in manufacturing and I thought, what better way than to build something they actually can work with.”

Putnam said he enjoys projects like these and enjoys helping the community. Of the Marine Robotics course itself, Putnam said, “That class is a model of what high school technical classes should be. It’s interesting, it’s challenging, it’s hands on, it’s problem solving. I think it’s an amazing program.”

While the Whelen representatives were visiting, Bastoni said she asked them what they are looking for in employees. They said someone who is willing to do the dirty work, gets excited about solving problems and is willing to work as part of a team.

Students in the class found the visit helpful. Junior Keith Fletcher said seeing the mold in person during the visit put things into perspective for him.

Junior Derek O’Mahoney said, “I thought it was cool how they brought in the mold because you don’t see all that stuff every day.” He added, “The experience was very interesting. It opened up my mind on how important manufacturing really is.”

The students agreed that the company not only brought an actual item for them to use for the class, it also brought knowledge and information for students to use outside school.

“We are really so grateful to Whelen, as it was an amazing donation to our students,” Bastoni said.