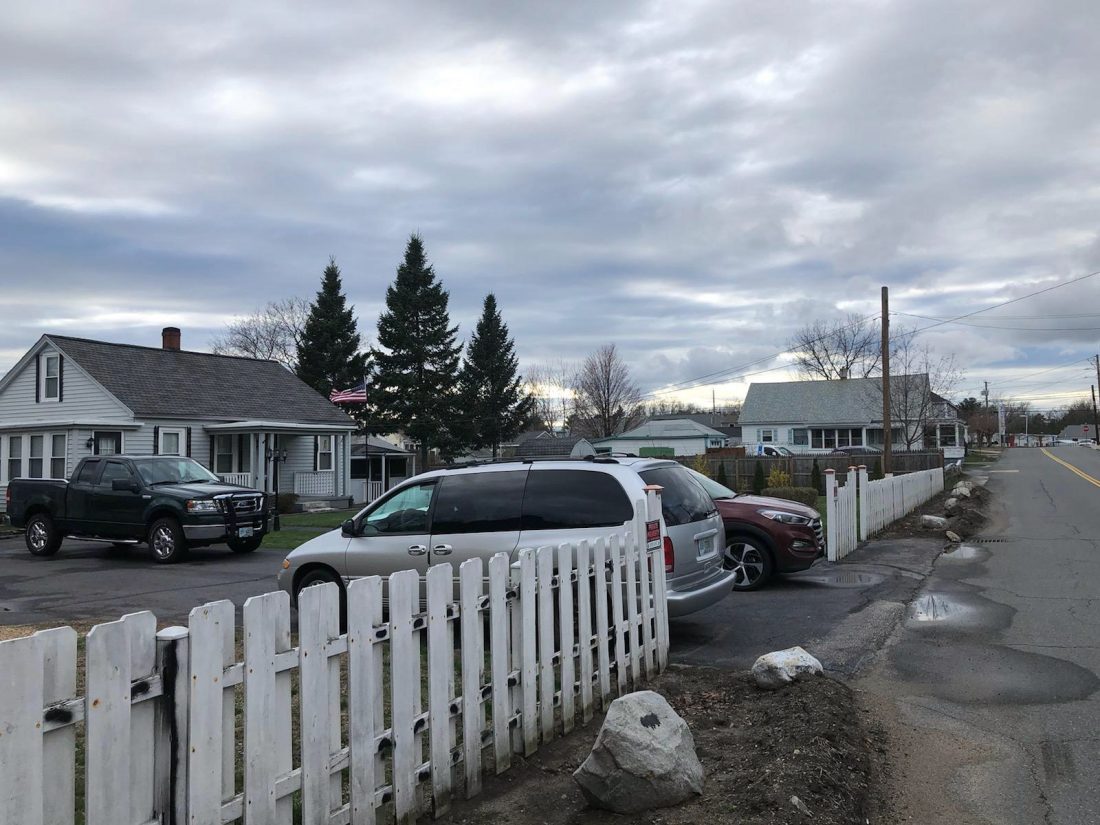 Telegraph photo by ADAM URQUHART Pamela Johnson, who owns the house at left at 13-13 1/2 Markar St., filed a civil rights complaint against numerous people and entities, including her neighbors, who live in the house in the background at 7 Markar St.

NASHUA – Alleging she and her family have been “bullied, harassed and threatened” for years by her neighbors – and ignored and “laughed out” of court when she reported the allegations to police and authorities – Nashua resident Pamela L. Johnson filed a civil rights complaint with the New Hampshire Attorney General’s office.

Johnson owns a residence at 13-13 1/2 Markar St. and lives at 13B Markar St., according to city property records. In her seven-page complaint, she alleges residents of 7 Markar St. “continue to stalk and harass us” despite being sent two letters ordering them to “cease and desist.”

Johnson claims her neighbors trespass on her property, despite the fact it is “posted,” apparently with “no trespassing” signs, and allow their dogs to leave messes and their children to “constantly retrieve balls and do whatever in our yard,” the complaint states.

The seven-page complaint, which the Attorney General’s office provided to The Telegraph in response to a public records request, names the city, Mayor Jim Donchess, the Division of Public Works, the city code enforcement division and the Nashua Police Department and its “past and present employees and relatives,” along with the “residents/owner of 7 Markar St.”

Johnson accuses the various defendants of conducting “a discriminatory pattern or practice,” committing “a civil rights violation,” and “a hate crime,” and alleges “police misconduct,” “abuse of power,” and “using this city to harass, etc,” according to the complaint.

However, soon-to-retire Police Chief Andrew Lavoie said Monday the department has “followed up on all of her complaints,” including at least one citizen complaint Johnson filed with the department.

The allegations in the complaint were either determined to be unfounded or the officer Johnson complained against was cleared, Lavoie said.

“The police have been very responsive to Ms. Johnson,” he said, adding that “judging from her feedback” regarding the police investigations, “the outcome apparently wasn’t what she hoped it would be.”

Lavoie said while Johnson is entitled to her opinion on the investigations and the outcomes, police “have to base our (investigations) on rules and the law.”

However, according to the March 21 complaint, the series of events that led to the complaint being filed began “on Easter of 2010,” Johnson wrote.

She said “an officer,” presumably a police officer, “demanded we produce a certified copy of the deed to our property,” but she doesn’t state why. Johnson said a police Professional Standards investigation ensued, during which, she alleged, “two officers lied on the stand” in court.

Johnson said she and her family were then required to “pay for a survey to be done … to prove the fence in question was ours.”

She doesn’t specify in the complaint who ordered her to perform the survey, or why there was a controversy about the fence.

In 2013, Johnson wrote, the occupants of 7 Markar St. moved out; a short time later, the current occupants arrived.

Johnson stated the new owners, which she described as a woman and her boyfriend, “were told to stay off our property … they were made aware that the property was surveyed … .”

Under what circumstances the new neighbors were warned, and whether Johnson issued the alleged warning, isn’t clear in the complaint narrative.

Johnson’s complaint alleges an ongoing back-and-forth between her and the new neighbors. She said the interactions occasionally involve threats, including one or more by a relative of one of the neighbors – who Johnson said was a police officer.

Another alleged incident Johnson referred to in the complaint prompted her to call police, then Child Protection Services, an arm of the state Division of Children Youth and Families.

She claims her neighbors, during a storm with “very heavy rains” and “a dark sky,” sent “their kids (out) to ride their skateboard and bike in the street … and told them to go to the drain.”

Johnson said the “drain” is in front of her house, and said she watched as vehicles “swerved around them trying not to hit them,” referring to the children.

After police “did nothing,” Johnson said, she called Child Protection Services.

In summary, Johnson said she filed the complaint to “ask the Attorney General for relief in this continued harassment from 7 Markar St. … .”

She called the complaint “a condensed version … there is a lot more. My family and I have been harassed, threatened, bullied, called ‘fags’ and have had people … from the city come onto my property without permission for no reason except to harass.”