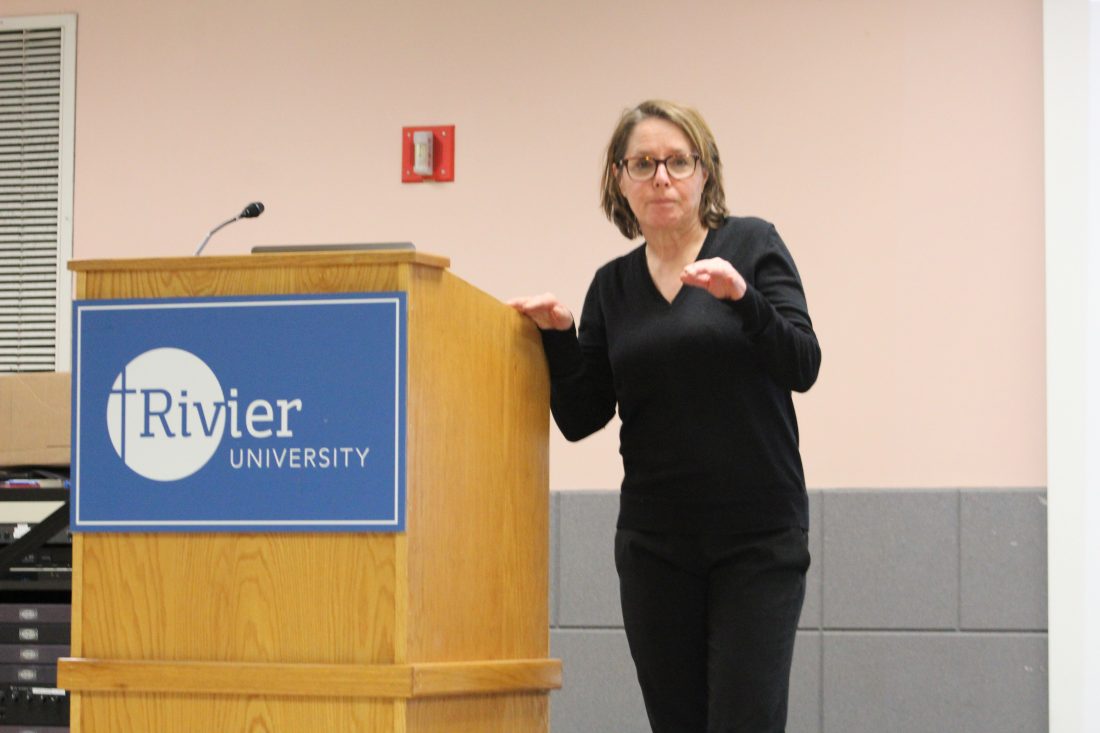 NASHUA – Former Québec journalist Michèle Ouimet spent Thursday night at Rivier University, where she shared stories of what it was like covering wars and natural disasters and reporting in dangerous areas. Michèle Ouimet was a journalist at La Presse in Montreal for 29 years, from 1989 to 2018.

Ouimet wrote about the Rwandan Genocide; the Syrian Civil War; the Taliban in Afghanistan; the famines in Zambia and Malawi; refugee camps in Pakistan, Africa, Chad and Lebanon; Egypt’s political revolution; the earthquake in Haiti and the tsunami in Japan, among other stories.

“It was my goal to go abroad to give voice to all people trapped in war and genocide,” Ouimet said.

Even when it got dangerous, Ouimet said, “It was so important to continue to report. Otherwise, those people did not have a voice.”

Ouimet shared in great detail her experiences covering the Rwandan Genocide in 1994 and the Syrian Civil War in 2012 and 2013.

She had been part of La Presse for five years when she went to Rwanda. It was in the midst of the genocide, and she didn’t know that by the time she had arrived, 200,000 to 300,000 people already had been killed. Ouimet said she couldn’t get into Rwanda by plane, because it was dangerous, so she got in contact with the Red Cross in Uganda and asked them to bring her into the country. Though reluctant, they did. During her time there, she stayed in a Tutisi military camp and conducted many interviews with refugees. She spoke of how difficult it was to get through the interviews with the Tutsi refugees, who were sharing stories of almost being killed by Hutus and fearing for their lives. They cried, and she cried, she said, but she kept writing. She shared that sleep was the most important thing, when in horrific situations such as those.

“When you’re out in the field in war, you’re too anxious and nervous, you have to sleep to keep going,” Ouimet said.

She stayed about a week in Rwanda. While there, she had seen the worst of the worst.

Upon returning home, she said she was too scared to show that she was upset with what she had seen, because she didn’t want to be seen as weak. Already, it was hard as a female reporter.

Two years later, Ouimet went to Afghanistan. Here, she worked with a fixer, a local journalist, who helped translate her interviews, drove her around and helped her with anything else she needed. Her fixer was well-connected with the Taliban and was able to set up an interview with one of the group’s commanders. She said she wanted to do the interview, because the only point of view the papers had was against the Taliban. Ouimet said she had spent two hours with him and learned of his story.

“It’s difficult to cover the war as a journalist, because you usually get one side,” Ouimet said.

Ouimet also shared her story of being in Syria in 2012. Her assignments surrounded, “What is a jihadist?” While in Syria, Ouimet had the opportunity to interview jihadists, which she said was very difficult, being a female journalist. Still, she said, they never refused to be interviewed.

Once Ouimet finished sharing her stories, she reflected and said being a female reporter was almost easier in a sense. While in Afghanistan, she wore burqas and in Syria she wore a veil and other garments to cover herself. She said it helped her, because she could essentially hide herself.

Quimet gave the audience a chance to ask her questions at the end of her presentation. One of the first questions asked was if she was ever scared while covering wars.

“Yes, but you’re so focused on your job,” Ouimet said. “You don’t have time to be afraid.”

“Being afraid is a good thing, because it makes you cautious,” she added.

Ouimet also said she had the help of other journalists and local fixers who she was able to consult with for advice.

Ouimet’s last assignment was in Saudi Arabia in 2017. She has since retired and is writing full-time. She is the recipient of several journalism awards, including the Michener Award for her report on Taliban prisons in Afghanistan.

She currently is writing a story about her reports around the world.

Ouimet’s visit Thursday evening was sponsored by the Club Richelieu of Nashua, and the Quebec Government Office in Boston.