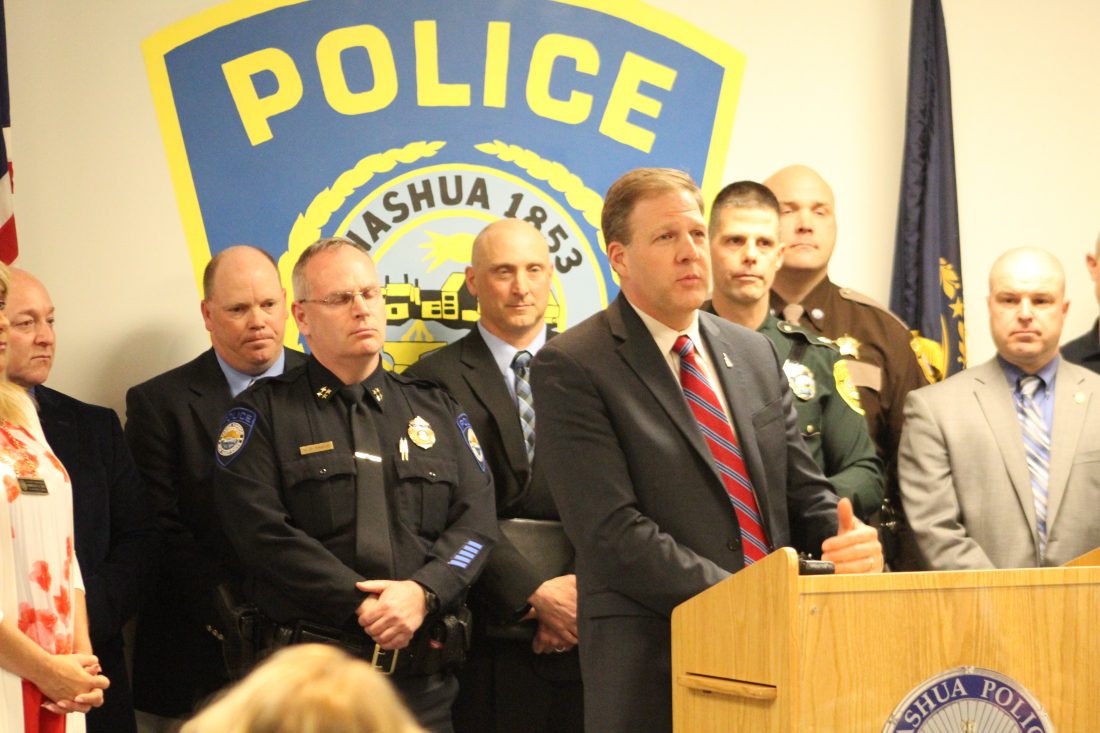 Telegraph photo by GRACE PECCI New Hampshire Gov. Chris Sununu speaks about the importance of funding for his Internet Crimes Against Children Task Force Tuesday at the Nashua Police Department. Funding for the initiative was recently taken out of Sununu’s budget by the House Finance Committee.

The event, also attended by ICAC Task Force representatives and law enforcement officials, was at the Nashua Police Department.

Sununu’s budget set aside $500,000 for ICAC, which would have provided for programs, technical resources and equipment for front-line workers who are trying to protect children from internet predators.

The mission of ICAC is to investigate and prosecute those who sexually exploit children online. The initiative provides training and equipment to those investigating these crimes, along with community education in regard to prevention of internet crimes against children.

“We all stand up here simply as a voice for parents and kids that don’t have a voice otherwise to say they need help,” Sununu added.

Sununu, A republican, said he found it “quite appalling” to see the funds removed.

During the press conference, the governor urged residents to reach out to their state representatives and senators.

“Whatever it takes, pick up a phone, write a letter, I don’t care. Get it done and get these funds issued,” Sununu said. “We’re finally turning the tide on something we just didn’t have a handle on for a long time. So anything we can do to restore this funding is absolutely critical.”

He also said the number of cyber tips received by New Hampshire ICAC is at an all-time high, and it appears that number will only continue to increase due to the pervasive use of cell phones and social media by children and adults.

“This problem is only going to get worse,” Peracchi said. “We need the resources to purchase equipment, educate the public, train law enforcement and proactively investigate these crimes against children.”

“A complete lack of funding would cripple the New Hampshire ICAC’s ability to operate and would essentially allow predators unrestricted access to the children of New Hampshire and beyond,” Peracchi added. “We respectfully ask for this dedicated funding to be put back in the budget so we can work to catch those offenders who produce and manufacture and trade these images.”

Mark Chase, president of New Hampshire Association of Chiefs of Police, said the New Hampshire police chief are urging legislators to put these funds back, as well, so they “can do their job on front-line defense to protect our children.”

Hillsborough County Sheriff James Hardy spoke on behalf of the state’s sheriffs, and said there are very few law enforcement agencies, including local, county or state, that can support the cost of these investigations. They depend on the ICAC Task Force.

“It’s critically important to safeguard the children across the state and we’re pleased, and I’m pleased, on behalf of 10 sheriffs across New Hampshire, to support the effort here today to restore this funding,” Hardy said.

Matt Fleming, a Bedford Police Department detective working on the ICAC Task Force as an investigator, urged for more community outreach. He said it all begins with educating children and families.

There are 61 task forces in the nation. New Hampshire only has one, but they work closely with other states, as many predators are willing to travel to meet up with children.

Throughout the state, there are 100 affiliates for the ICAC Task Force.