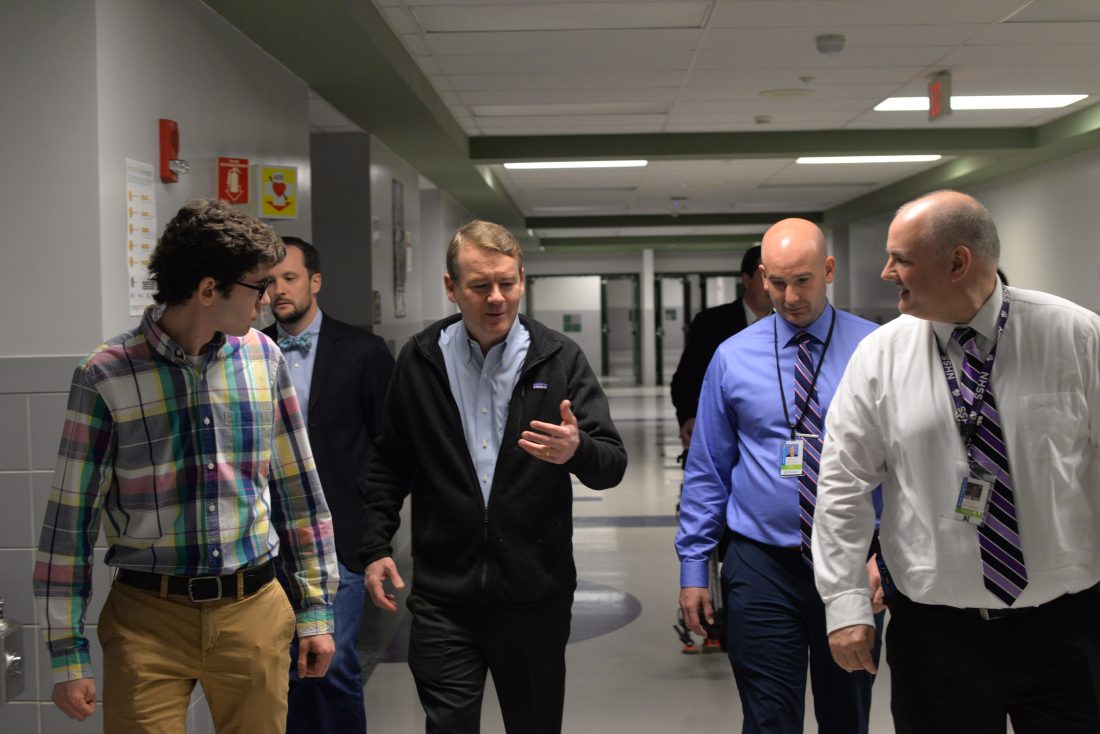 Telegraph photo by ADAM URQUHART U.S. Sen. Michael Bennet, D-Colo., tours Nashua High School South Monday morning, stopping in at various classrooms, including the machine room. With his arm resting on a piece of machinery, he listens as a teacher tells him about the classroom, while CTE Director Mike McQuilkin looks on.

NASHUA – U.S. Sen. Michael Bennet, D-Colo., toured Nashua High School South Monday morning, the last stop of his Granite State tour, as he weighs a run for the presidency in 2020.

Bennet, who was first elected to the U.S. Senate in 2009, toured the school, speaking with teachers, students and administrators, including Katherine Johnson’s civics class, where he answered submitted questions. The room full of 16 year olds began the new quarter Monday.

At the top of the list of questions, was whether the senator would would seek the Democrat Party nomination for president in the upcoming election.

Bennet, the father or three girls ages 19, 18 and 14, said each of his girls have a slightly different view on the matter.

“The 14 year old desperately wants me to run for president, because she sees it as a way to keep me as far away from her as possible for the next couple years,” Bennet joked. 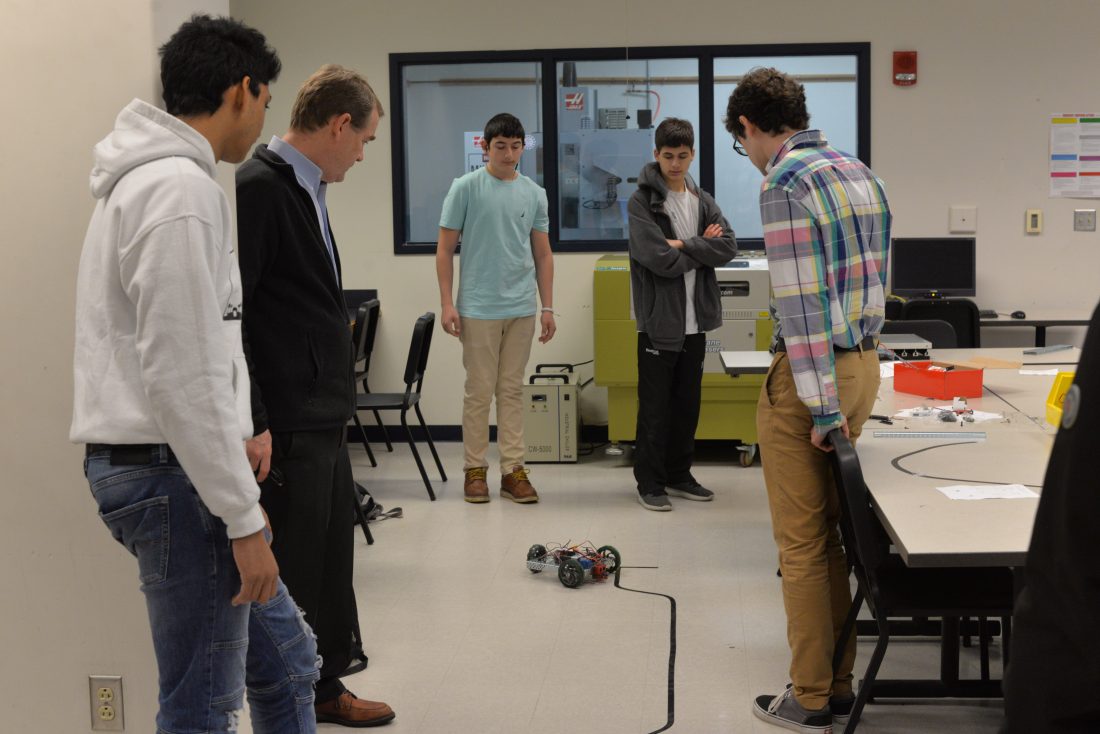 The veteran senator also talked about his time in Congress, noting there were good days and bad days on Capital Hill.

He went on to emphasize how this is why he thinks it is really important for the students to be learning civics now. He said there is no time like the present to actually put it to work, and despite the students being a couple years away from being able to vote, he said there are ways of putting it to work in their community.

One Nashua High School South student already has been getting a head start on his civic engagement, Ben Telerski, 18, who is a senior and president of the Young Democrats Club and chair of the New Hampshire High School Democrats. He is the one who set up Bennet’s tour, and guided him through the school.

“I think it was great to have Sen. Bennet come visit,” Telerski said. “He was superintendent in Denver, so he really is excited about coming to visit schools. He’s considering a presidential run, so I think it’s great that he’s coming to visit us in New Hampshire. It was great to have him see the current technical programs we have as well as get to talk to a civics class about the importance of getting involved in government.”

In the fall, Telerski will be attending Georgetown University in Washington, D.C., where he will study government. He said he loves living in New Hampshire, especially because of the many candidate visits. He said, so far, he has met eight or nine of them, which he said is amazing since not many students have that opportunity.

Principal Keith Richard said the tour was great, and that he loves showing off the school. He said he really is proud of Telerski for setting up the tour.

“He’s an amazing student, one of the products of Nashua South that we love to showcase, because I know that he’s going to go places,” Richard said. “It was just a great day and good visit.”

“I echo what Principal Richard said,” CTE Director Mike McQuilkin said. “I’m really proud of our kids, proud of our teachers, showing off our programs, especially our CTE programs – really showing the opportunities we offer kids.”

McQuilkin said Bennet took the time to talk to the kids and seemed really interested in what they were doing.

Both McQuilkin and Richard accompanied Bennet on the tour, helping to introduce different teachers and highlighting different areas of the school.

“I think what these guys are doing here with CTE is really, really important, and what I believe is that we need to much better align our high school technical curriculum with what we’re doing at community colleges and what businesses actually need,” Bennet said. “That’s one of the things these guys are doing (well).”

He explained that officials are going out into the business community and asking what skills are needed from students so that they can actually make a decent wage. He said that connection is very important, and is something that is not seen in most parts of the country.

“I think being able to use the federal government to help align that work at the local level while it’s led by the local level would be an important step forward for the country,” Bennet said.