In the Bedroom: Milford exhibit shows parents drug use signs 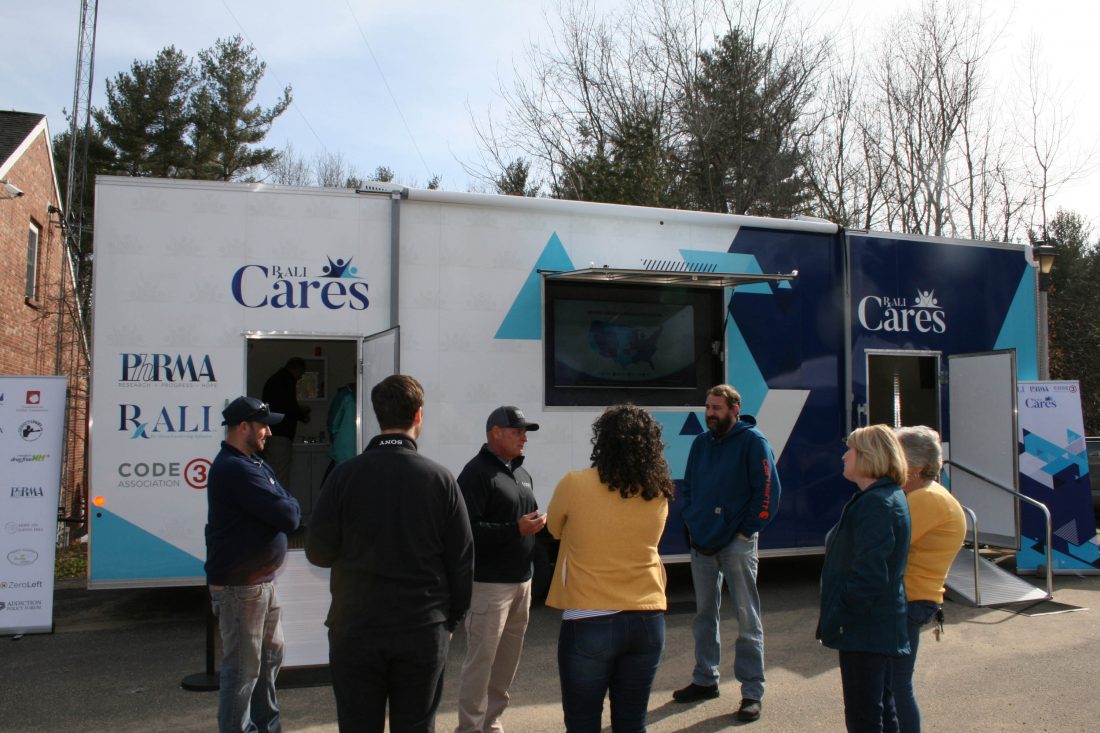 Telegraph photos by KATHY CLEVELAND A trailer with a mock bedroom was parked in the Amherst Police Department parking lot March 27 to show parents how to search for signs of drug use.

AMHERST – Kevin Barrows has seen it all, and he wants parents to see what he sees.

The retired sheriff was in a trailer in the Amherst Police Department parking lot last week – a trailer tricked-out to resemble the bedroom of someone in their late teens or early 20s who is using illegal drugs.

It was full of drug-like substances and drug paraphernalia, but nothing that the ordinary person would notice at first glance.

“Instead of trying to explain” to parents what to look for, the exhibit shows how to detect a young person’s drug use, Barrow said, with the aim of stopping it early.

Paraphernalia can be simple – like little pieces of folded paper. Unless they have friends’ phone numbers on them, they can be a sign of drug use, he told the small group of people on one of his tours.

On a ledge in the trailer was a full can of Coke. “How long would that last in teenager’s bedroom?” Barrows said, pulling a bag of heroin from the can that was actually empty of soda but engineered to look full.

Or how about an innocent-looking box of toothpaste? A perfect place to hide a needle.

The exhibit is from a nonprofit called RX ALI (Abuse Leadership Initiative) Cares, which teamed up with Code 3, an organization in the Washington D.C. area that helps police and communities work better together.

Drug abuse “was taxing our law enforcement,” said Barrows, and parents of drug users were not aware of what was going on. They didn’t know the meaning of, for example, shoes with missing shoelaces or constipation medicines in kids’ medicine closet, or small pieces of tinfoil with burn marks.

Parents tend to blame themselves for not noticing the signs, Barrows said, but unless they were drug users themselves, it would be very hard to know what to look for.

The RX ALI Cares New Hampshire tour began a few weeks ago in front of the State House in Concord with an appearance by Gov. Chris Sununu. Amherst Police Chief Mark Reams said state Sen. Shannon Chandley (D-Amherst) had reached out to him about bringing the exhibit to Amherst.

Visitors to the exhibit, who had to be 21 or older, received a tote bag with information about opioids and about RX ALI – New Hampshire. Among the gift items was a drug deactiviation kit, to neutralize pills, liquids and patches, as well as information like this:

Although two-thirds of teens who abuse prescription pain medication are getting them from their family or friends’ medicine cabinets, studies show that when parents are discussing illicit drugs with their children, very few of them explain the dangers of prescription medication abuse.