Merrimack woman to run for good cause in Boston Marathon 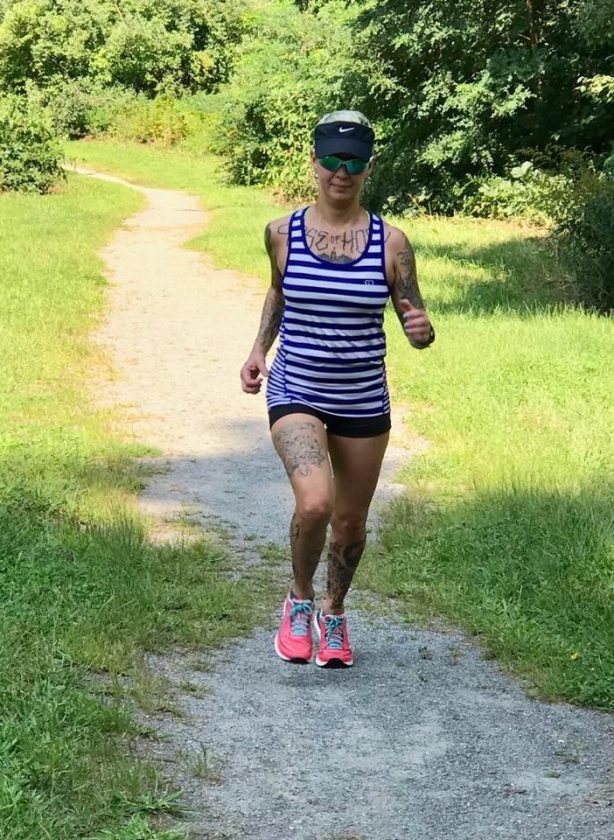 Courtesy photo Merrimack resident Michelle “Mo” Wheeler will be running as in the Boston Marathon for the second time, April 15, as part of the Samaritans’ Marathon Team. The team runs in honor of loved ones lost to suicide, while raising funds, hope and awareness for suicide prevention.

MERRIMACK – Town resident Michelle “Mo” Wheeler has made many strides in her life.

A recent one includes training to run in the Boston Marathon on April 15. For Wheeler, her “why” for running this marathon is a very personal one. She will be once again joining the Samaritans’ Marathon Team and will be running in honor of loved ones lost to suicide. The goal is to raise funds, hope and awareness for suicide prevention.

More than 20 years ago, Wheeler tried to take her own life. As she puts it, she was saved by a “very soft, distant, yet persistent voice” in her head that told her to keep fighting. So that’s what she did.

She was diagnosed with bipolar disorder. She said she began running to help balance her life. Wheeler became a runner at age 38, almost 10 years ago. For Wheeler, running became an outlet for coping with her problems.

“I have said before and I will say it again,

running has saved my life,” Wheeler wrote in her story she had shared through her online CrowdRise fundraiser.

Wheeler said growing up, she wasn’t an athlete. One of the first runs she did was the Nashua Soup Kitchen & Shelter’s Annual Run for Food and Shelter in the 1990s. She now serves as director of this event.

Wheeler enjoyed the successful feeling of crossing the finish line.

“Later in life, when I couldn’t figure out what to do to help balance my moods and deal with those things in a healthy way, I looked back at what made me happy,” Wheeler said.

In terms of running, Wheeler began running farther and farther, and eventually decided to challenge herself to a marathon. In 2015, she signed up to run in the Boston Marathon and to be part of the Samaritans’ Marathon Team. She wanted to do this because of all the work the group does to help prevent suicide.

The nonprofit organization offers 24/7 crisis services, grief support for those who have lost loved ones to suicide and suicide prevention workshops.

All proceeds generated from the team’s efforts will benefit the suicide prevention services.

As Wheeler embarks on her 26.2-mile journey later this month, she will also be running for loved ones, as well as for a friend’s family who lost two family members to suicide.

During her first year running the marathon, Wheeler raised more than $11,000 for Samaritans. This year, her goal is to raise $10,000.

“I’ve been a fundraiser my entire life, one way or another – it’s just part of my DNA,” Wheeler said. “I just feel like giving back to the community is so important because people can learn so much from your experiences and it can change their life.”

“My focus is mental health and feeding people the real basics of life: being healthy mentally and physically, educating the public about suicide prevention, and raising much-needed funds,” Wheeler added.

Wheeler said the biggest thing she stands for and tries to promote is the idea that it is OK not to be OK – and it’s OK to seek help.

“There’s so much help out there – whether it’s finding a therapist, joining a support group, online therapy, whether you want to do yoga. I try to let people know you don’t have to sit in it because you can find help. You can get out of it. And of course, one of the ways is to reach out to Samaritans.”