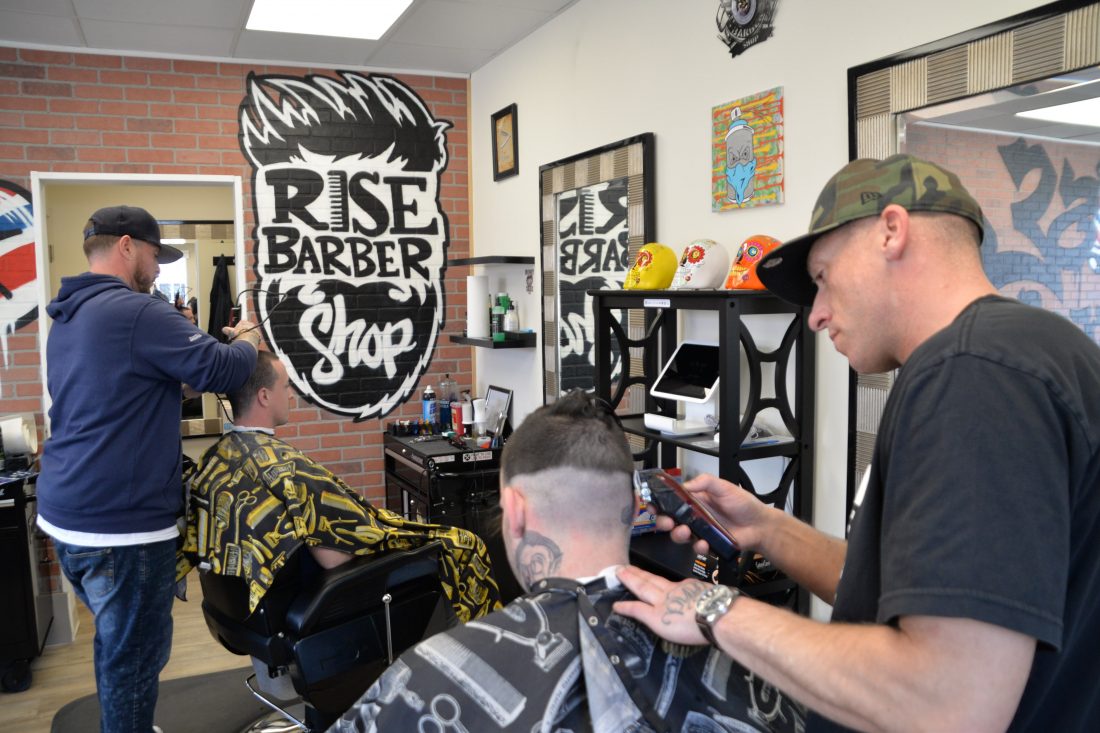 NASHUA – Rise Barber Shop is a new recovery-friendly workplace on the corner of West Hollis Street, striving to reignite the spirit in addicts.

Chris Dinicola founded the business, which in some ways operates as a nonprofit by providing free services. It is run by master barbers Craig Brewster and Seth Geraghty. All three of whom are recovering addicts aiming to help the community.

Dinicola has been clean for 15 years, and started a sober living program in Nashua five years ago called Rise Above. He said the program grew and expanded during the course of five years. It serves men and women who are seeking a sober life.

His partner Justin has been clean for 22 years. That eventually led into a treatment center called The Process Recovery Center, which then led into Revive Recovery Center.

Brewster and Geraghty have each been cutting hair for years, but never thought they would be clipping hair side-by-side in their own shop in Nashua.

“Up until now, my whole life, nothing was possible,” Brewster said. “My life consisted of using drugs, going to jail and overdosing – that was my life. Now, it’s a life – it’s actually a life. I can provide for my kids, family; actually love people, have people love me and want me to be around; want to be around other people. And now, also giving back because a lot has been given to me. So, now I can give back. It’s a good feeling,” Brewster said.

Brewster has been cutting hair since about the age of 16, beginning by cutting friends’ hair. He loved it, and really enjoys making people feel better.

He said he doesn’t even know how he made it through school because he was using drugs the whole time. However, at 25 years old, he got more into cutting hair.

“There’s nothing else I would want to be doing other than this,” Brewster said.

Geraghty comes from similar circumstances, and has now been a master barber for about 15 years. He got his start by cutting hair around town at a young age, getting better by cutting the hair of neighbors and friends.

When he was in his early 20s, he realized he should go to school to earn some money doing this. He ended up attending barber school in New York City, and has been cutting ever since.

“We grew up pretty poor, so like me and my brother cut each other’s hair,” Geraghty said.

He grew up in Keene, but lived down in New Jersey for most of his life. Brewster, on the other hand, arrived in New Hampshire from Lynn, Massachusetts. The two crossed paths while at Process Recovery and began cutting hair. They even got a barber’s chair in the center to give out free haircuts to others in recovery. Those free haircuts continue at Rise Barber Shop. Although open for just about two months, they have each given away dozens of free cuts.

Dinicola said he grew up with Brewster and reconnected with him through being clean and getting out of jail and wanting to turn his life around for the better.

“I remember the first day I ‘Uber’d’ him to my house, he was fresh out of jail and we had a conversation, and I always knew that he was a talented barber,” Dinicola said. “I was telling him, all you have to do is stay clean and do the next right thing, and you can have your own barber shop and all these things can come true for you.”

Dinicola said he remembers the look on Brewster’s face as they were chatting in his kitchen, his expression showing that he did not see how that was going to be possible. However, he said Brewster chose to trust him, anyway. Dinicola said Brewster went through Process, and Geraghty happened to come in around the same time.

He began talking to both of them in the early stages, advising them to keep doing what they were doing. Then, they would open a barber shop in Nashua, under the premise that when they do, the only participation he would have is managing the business component for them in the first year. In doing so, he is showing the two master barbers the business side of barbering, such as taxes, payroll and how to set up an LLC. Dinicola’s agreement with Brewster and Geraghty is that he will put up the money if they give back to the community, leading to their doors opening this year at 136 W. Pearl St.

However, this was a no-brainer for the two barbers since they were already giving back as it is. Now, they would do so under the roof of a professional business, owned and operated by recovering addicts.

“Our philosophy has always been reigniting the spirit in the addict,” Dinicola said. “Why I believe in that and why I’m so passionate about that, is because I’m a recovering heroin addict with no education and a criminal record. When I was 25, I chose to follow my dreams and that eventually led me into becoming a professional dancer.”

He became a hip-hop dancer and ended up on MTV’s show America’s Best Dance Crew and opened his own dance studio. He said that ignited his spirit and changed his belief system, something he strives to see happen in others entering the early stages of recovery.

Dinicola said the basic premise of what they believe in is their community connection, and understanding an addict is not alone. After that, he said they believe in opportunity and spiritual awakening, which is changing one’s belief system.

“The basis of that is the community is the safe housing component, especially for addicts in early recovery, having a safe place to live,” Dinicola said. “The connection component is so that you don’t feel isolated and alone, and that you see that there’s other people going around struggling with the same things that you’re struggling with. The opportunity component is a lot of people in early recovery, myself included, have a limited belief system of what they believe their lives could become.”

He said for an addict, their own belief system can hinder them along the road to recovery because so many start out having not gone to school, or having unfinished courses, criminal records from usage and active addiction or any number of things restraining them.

Both Brewster and Geraghty are continuing to allow their belief systems to change as they take another step down the road to recovery with each passing day.

“I came in here broken as hell,” Geraghty said. “When I got here, my whole belief was I just got to keep doing the right thing and, hopefully, things get better. But people like Chris, people like Craig, they showed me it could get better. I just followed the people before me, what they were doing, and it worked out for me – it’s working out for me. Every day’s a struggle, but it’s getting better. Every day’s a gift from God to me.”

He has been clean for six months, and Brewster has been clean for seven months. Now, both are helping others to follow suit and seek an addiction-free life by offering free haircuts through a voucher system and offering a safe, drug-free place for people to be. They have begun coordinating with some area treatment centers where if they have a client in early recovery, they can send a voucher along with the client for a free cut.

Brewster said if someone has a job interview, they will give them a free haircut. He said there are a lot of shelters in the area. So far, he and Geraghty have seen a lot of homeless folks coming up and down the street, popping their heads in to see what the new business.

Brewster said they will tell them to come on in and get a free haircut. Both master barbers agree that being involved in the shop is helping to keep them clean.

“It’s a dream, and it’s something that I would never want to lose,” Brewster said.

In between, cutting hair and giving back, the two barbers are also continuing their recovery.