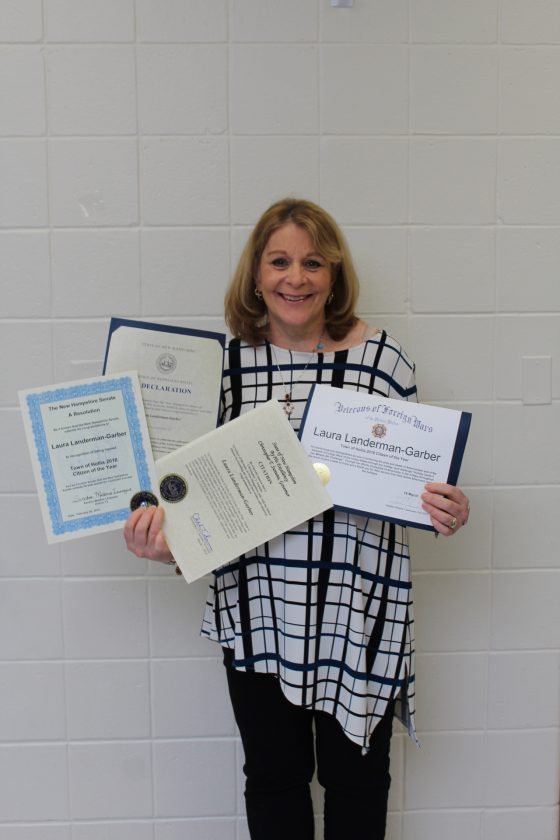 Photo by GEORGE PELLETIER Hollis resident Laura Landerman-Garber is the 2018 Hollis “Woman of the Year.”

HOLLIS – Laura Landerman-Garber, the woman who spearheaded the statewide holiday card challenge for military members, received several merit honors and was named, “Woman of the Year,” during the annual Hollis Town Meeting at Saturday at Hollis Brookline High School.

Landerman-Garber, who is also the founder of the nonprofit “Holiday Cards 4 Our Military-NH,” was more than shocked as her name was read aloud.

“My husband told me we were going to IHOP,” she told the crowd of attendees. (She knew nothing about the honors.) “That’s a true story.”

In thanking people for the special recognition — which included certificates of appreciation from Gov. Chris Sununu’s office and New Hampshire state Sen. Melanie Levesque, D-Nashua – Landerman-Garner expressed her gratitude for military members and their families.

“Thank you to the service men and women of our country, here and abroad, for keeping us safe every day,” she said.

Landerman-Garner also joked that she’s a bit of a noisy person.

“I am,” she added. “And my noise got some action. But it takes a village, and it started right here in Hollis.”

She went on to say that she appreciated, “every single card that every single person wrote, from age 2 to 92. The most important part of this is that every member of the military receive some support and love from New Hampshire during the holidays.”

She reminded folks that she would be back soon, “doing Hanukkah, Christmas and Kwanza in July.”

Later, she thanked the Telegraph for its role.

“The Telegraph has been amazing. The coverage launched this initiative into a statewide event,” she said.

This “event,” all started at her Thanksgiving dining room table, some 15 years ago.

“I had read an article in a magazine, somewhere, that said it was a good idea to send holiday cards to the military,” Landerman-Garber said. “So, in order to eat turkey, I insisted that everybody around the table write a card.”

Veterans and emergency responders, in particular, leaped into action when Landerman-Garber made her phone calls.

“I contacted everyone, from the police force to the senators in Washington, D.C., and everybody said yes,” she said. “This whole experience has been incredible.”