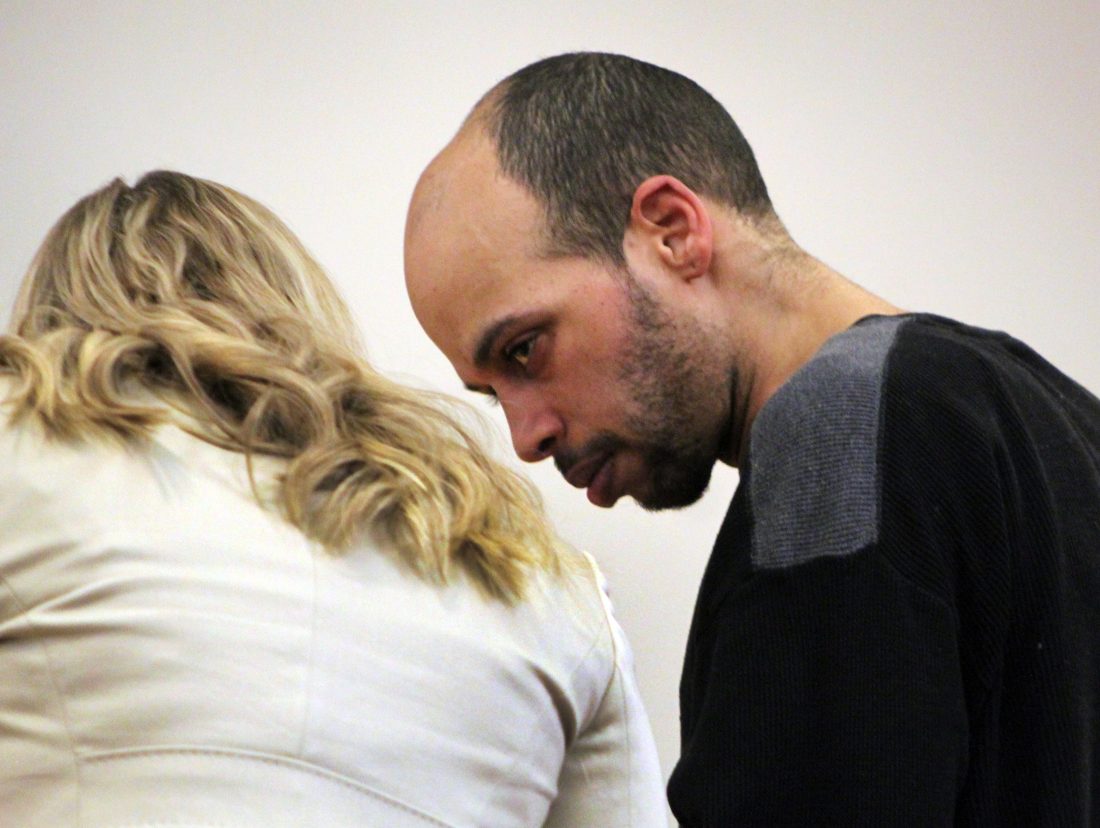 Telegraph photo by DEAN SHALHOUP Freddie Buchanan, charged Monday with a series of domestic violence offenses, listens to his appointed attorney, Amanda Henderson, during his bail hearing Tuesday in Superior Court. A judge ordered him held on preventive detention.

Telegraph photo by DEAN SHALHOUP Freddie Buchanan, charged Monday with a series of domestic violence offenses, listens to his appointed attorney, Amanda Henderson, during his bail hearing Tuesday in Superior Court. A judge ordered him held on preventive detention.

NASHUA – A prosecutor on Tuesday convinced a Superior Court judge to hold domestic violence suspect Freddie Buchanan in jail, referring to him as a danger to the public and himself and accusing him of perpetrating a violent, prolonged attack on a female acquaintance.

Buchanan, 38, “adamantly denies these allegations,” according to his attorney, public defender Amanda Henderson. However, Assistant County Attorney Brett Harpster established a scenario in which Buchanan allegedly strangled the woman three times, slapped her around, grabbed her by the neck and on one occasion, allegedly grabbed her and pulled her back into the residence when she tried to jump out a window to escape.

Buchanan, who survived a January 2016 stabbing outside 87 Central St. in Hudson, was arrested Monday, about three hours after the alleged victim contacted police.

Buchanan on Tuesday entered not guilty pleas to the charges and waived formal arraignment.

During the subsequent bail hearing, Harpster recommended Buchanan be held on preventive detention, and that he be prohibited from having any contact with the alleged victim.

Harpster told Judge Charles Temple the alleged assaults took place on Friday, but the alleged victim went to police Monday. At some point during the interim, Harpster said, the woman sent a social media message to a friend, telling the friend Buchanan allegedly assaulted her and that she needed a place to stay.

Harpster, meanwhile, read a series of entries on Buchanan’s criminal record, going back to 2002 when he was convicted of a misdemeanor-level possession of a controlled drug charge from Merrimack district court.

In 2015, Buchanan was convicted of possession of a controlled drug, his sentence for which was suspended, then deferred. A year later, he was sent to jail for three months for violating a protective order. Then, about a year ago, he was convicted of domestic violence-related simple assault, which drew a 90-day jail sentence that was suspended for a year.

In April 2018, Harpster said, Buchanan pleaded guilty to one count each of felony robbery and receiving stolen property, for which he was sentenced to three to six years in prison, all suspended for five years.

Henderson, Buchanan’s attorney, asked Temple for personal recognizance bail, noting that he has “been doing well” in complying with the terms of his probation.

Buchanan has also been receiving treatment at a Suboxone clinic, and has been attending anger counseling sessions, Henderson said. If he were released, Buchanan would be ordered to report immediately to his probation officer, then scheduled for a review hearing within a week to see if he is complying with court orders.