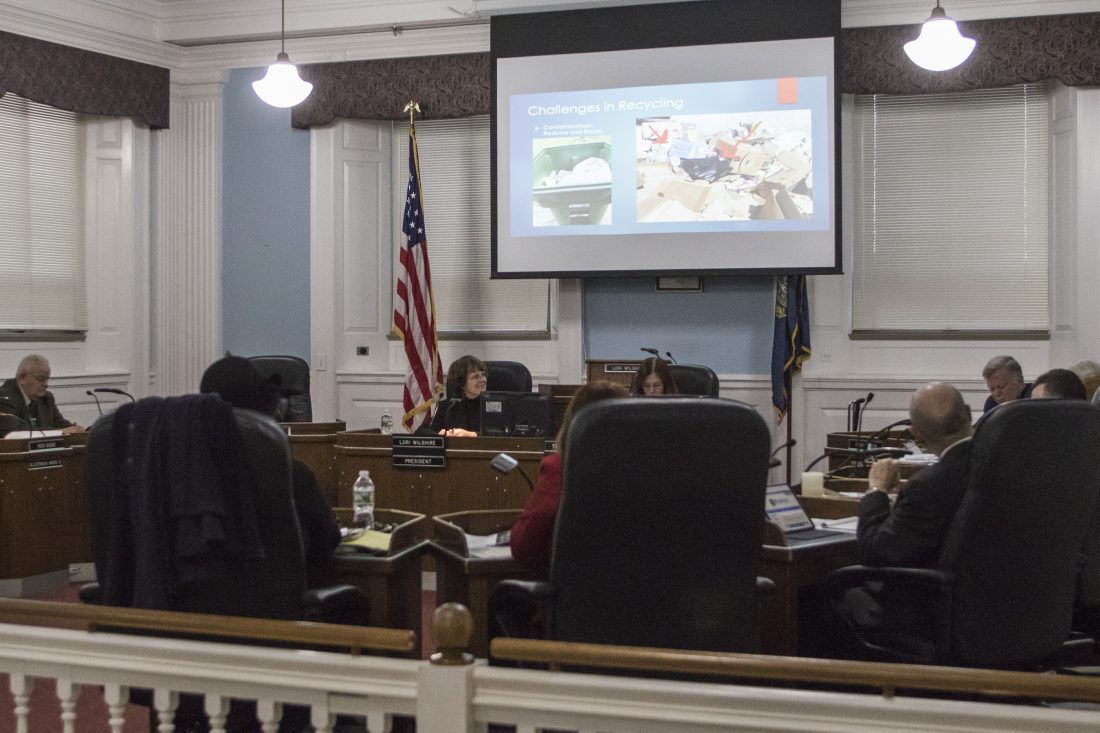 Telegraph photo by MATHEW PLAMONDON The Board of Aldermen view a presentation concerning the city’s recycling program on Tuesday.

NASHUA – Without a $120,000 boost in city funds, Nashua officials will run out of money for their recycling program by the end of this month – meaning the material will simply be landfilled until July.

Before city leaders can dissect the $317 million fiscal year 2020 budget – which would be about an $11 million increase from the current fiscal year – Mayor Jim Donchess proposed during the Tuesday Board of Aldermen meeting, they have a problem to address in fiscal year 2019.

Tuesday, officials from the Nashua Solid Waste Department and Public Works Director Lisa Fauteux gave a brief introduction, and in doing so, said single-stream recycling is in a transitional state right now, with most recyclables going to China. However, she said China ultimately caused the price of single-stream recycling to increase considerably.

However, the money for single-use recycling is running out for fiscal year 2019. City leaders originally appropriated $400,000 to run the program in fiscal year 2019, but they now anticipate this money will be expended by the end of March.

• discontinue recycling for the months of April, May and June, or,

• appropriate an additional $120,000 to cover recycling costs for single-stream recycling over the next three months.

Solid Waste Superintendent Jeffrey Lafleur joined Fauteux during her presentation, as did city Recycling Coordinator Sally Hyland. Lafleur said so far, 8,500 recycle bins have been sold to city residents. If Board of Aldermen members do not appropriate more funding for recycling, he said, the money people have spent to recycle using those bins will basically have been for not.

Resolution 19-115 came up in new business during the regular Board of Aldermen meeting later Tuesday evening. This resolution calls for appropriating the $120,000 of unanticipated revenue to be used to fill the hole in the recycling budget. The matter was was then assigned to the Budget Review Committee.

Parking Fees and Other Matters

Also, Ordinance 18-030, relative to increasing parking fees for city leased parking spaces in surface lots and garages, was also referred to the Personnel and Administrative Affairs Committee. City officials expect to collect $178,000 in 2020 after raising the cost to park in leased spaces at the Elm Street and High Street garages, as well as some surface lots. Currently, the city charges $30 per month for rooftop parking at the garages, while the cost of covered parking is $45 per month. These costs would go to $60 for monthly garage parking on Jan. 1, if the ordinance ultimately passed in its current form.

“The entire point of this was just to get it up to market rate because everywhere around us is charging more than double than we’re charging for monthly lease parking,” Alderman Brandon Laws said.

Moreover, recently elected Alderman-at-Large Ben Clemons returned to the board Tuesday evening for the first time since winning the Special Municipal Election last week. He said it is a good move to refer the parking fees matter back to committee.

“I’d like to get more information, myself, about what the impact will be on businesses downtown that currently lease, or that are looking to lease, and that potentially might want to move into the downtown — if this would be helpful or a deterrent, or what the case might be,” Clemons said of the parking fees.

Resolution 18-073, which proposes an amendment to the city charter relative to filling vacancies on elected boards by majority vote of the remaining members of that board, was also referred to committee. Due to those members of the public who spoke in opposition to this resolution, in its sixth reading, it was again referred to the Personnel and Administrative Affairs Committee on April 1. Officials brought up various points while going back and forth, highlighting the expensive these elections have on taxpayers, especially when so few voters head out to the polls. As it is, it costs about $30,000 to hold one of these elections. Alderman Michael O’Brien was the only member present who opposed sending it back to committee.