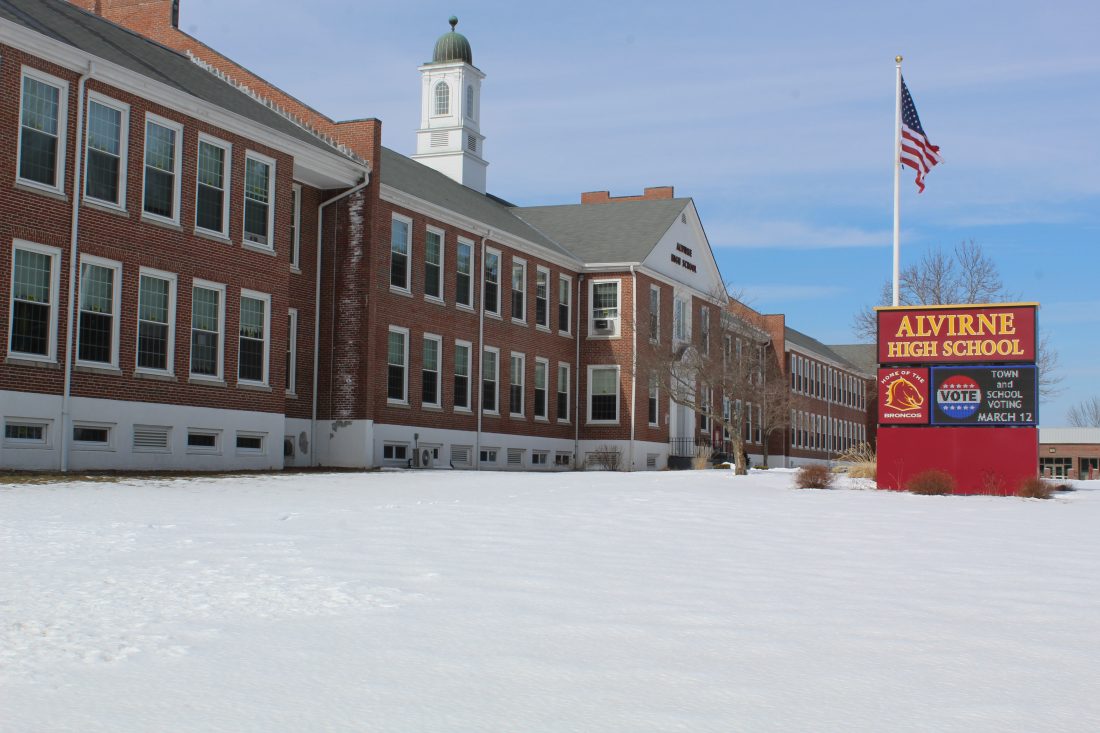 Telegraph photo by GRACE PECCI Tuesday, Hudson taxpayers will vote on whether to support the $24 million renovation project at Alvirne High School, among a number of other warrant articles on the ballot for its town election. Renovations include site maintenance, enhanced security, a new gymnasium, and an updated parking lot.

HUDSON – Tuesday, Hudson taxpayers will decide whether to support the $24 million renovation project at Alvirne High School, which is one of several warrant articles on the ballot for its town election.

If approved with 60 percent of the vote, Warrant Article 1, issued by the Hudson School Board, will allow the district to purchase a bond of $23,989,957 for the design, construction, and equipping of additions and renovations to the school.

The renovation project would address five key priorities. Alvirne High School Principal Steve Beals said the priorities were established during a collaborative effort between the Hudson School Board, the SAU Administration and school administration.

Beals said the school has been evaluated by New Hampshire emergency and security officials. He said there are nine areas of recommendations for the school. These include: secure/vestibule, security cameras, vehicular impediments, sight lines, securable public areas, secure hardware, strategically located meeting areas, strategically located staff and a consolidated entrance.

“It doesn’t mean we’re not safe. It means we’re not meeting for those nine,” Beals said. Still, he said he has no visual site of the parking lot from his office, nor does the school’s student resource officer.

One of the main reasons there are recommendation actions not met is because of the way the school is constructed. Due to where the doors and parking lots are located, visitors must be escorted from one place to the next. Beals said the safety of the school could be enhanced by having one central main entrance area with offices located right next to it. This would allow people to process and take care of their business – then leave the building without interacting with students and staff.

Beals also attributed the the school’s physical characteristics to the fact that it was built in 1975, a time when school safety from external threats was not as much of a concern.

Beals said the other four main reasons for the planned renovations include:

• Providing for a safe and secure sequence for dropping off students;

• Enhancing facilities for performing arts and athletics; and

Another issue the school faces is the parking lot, which Beals referred to as a “big asphalt jungle.” Among all the students, cars, buses and walking pedestrians tangled together, Beals said they are looking to improve the areas for student drop off.

“We monitor it to the best of our ability and we try to slow people down with physical presence and direction of the parking lot, but we also know that it’s not ideal,” Beals said.

A major problem the school faces is its “gym-a-torium,” as Beals called it, which is a gym combined with an auditorium.

“We have consistent competition for space,” Beals said. The competition lasts both during the day and after school. Beals said when there is an assembly or a music concert, students may have their gym class canceled. It becomes a problem, especially in the winter.

Beals described it as a problem of “having competition between kids in same school, for the same space with all special talents that deserve to be showcased, from the basketball player, to the trumpet player, to the theatrical performer.” He added, “We should be working to solidify appropriate space for all of them,” Beals said.

If the warrant article gets enough votes, the renovation plan would involve building a new gym on the school’s first floor, as well as converting the current gym into a 684-seat auditorium with three tiers of seating.

Also, in building a new auditorium, should the warrant article be passed, Beals said this would allow for a community auditorium or theater.

Beals said there is currently no community theater in Hudson. If the school was able to have that, he said there would be more opportunities to host social activities.

“We would enhance the community appeal of Hudson for perspective homeowners looking to say, ‘What makes me want to go to Hudson instead of Londonderry or Pelham, or Litchfield or Nashua,” Beals said.

He said the common theme among those high schools is that they are more modern than Alvirne High School.

If this renovation project gets 60 percent of approving votes, the project will be divided into six phases. The tentative schedule shows that work would start in July and last until sometime in 2021.

This is not the first time this warrant article will be on the ballot. Last year, it was on the ballot, along with an article that would allow for purchase of a $25 million bond to support career and technical education (CTE) renovation. The CTE article passed , but the Alvirne High School renovation article failed by 42 votes.

For Beals, an important part of this process is voter turnout.

“More than anything, I want to have a strong showing throughout the day that the polls are busy, that the constituents of Hudson vote, from senior citizens, to parents who have kids, to community members who have no kids, to 18-year-old students who get to vote for the first time of their life,” Beals said.

He added, “We remain committed and optimistic, but we also know getting 60 percent of people to vote for something is hard. Getting that number for anything is a challenge. And then, you add that challenge to the financial aspect. No one wakes up in the morning saying, ‘I love paying my taxes.'”

For those eligible, voting will take place from 7 a.m. to 8 p.m. Tuesday at the Community Center, located at 12 Lions Ave., Hudson.