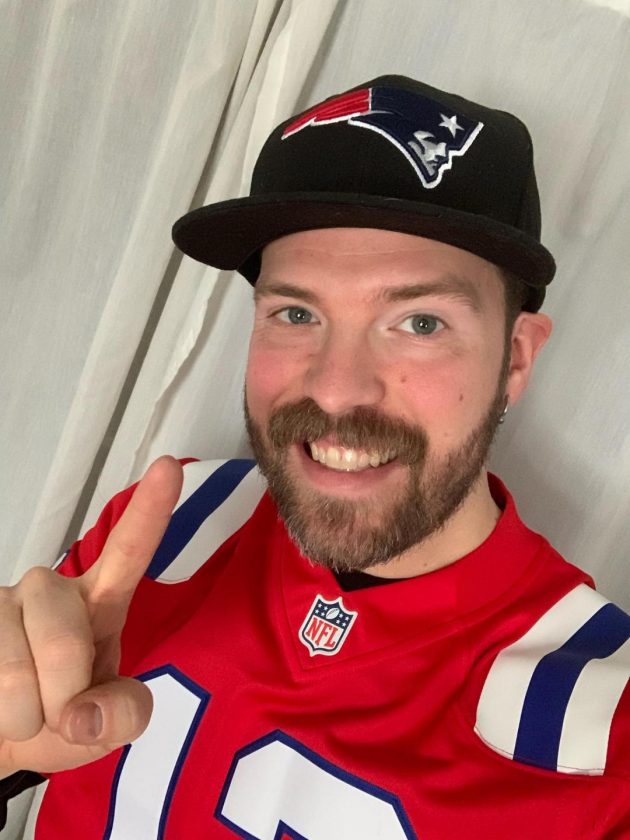 ATLANTA – The sun was shining bright at Centennial Olympic Park on Saturday, a great day in the 60s for current and former Nashua area Patriot fans to enjoy the Super Bowl LIII atmosphere.

It was absolutely mobbed, and those in Patriots gear certainly outnumbered any in Rams shirts, caps, etc.

For Nashua’s Gene Fennelly, he had all the confidence in the Patriots, making the plans for Atlanta at the beginning of the season.

He and friends Rick Milosh of Litchfield, and Nashua’s Charlie Allison were fully expecting to get their hands on tickets for tonight’s game.

“We’re supposed to have them, we haven’t finalized them yet,” Fennelly said Saturday afternoon, sitting by the reflecting pool at Centennial Olympic Park. “We’ve gotten them from the last couple of years, we just haven’t caught up.” 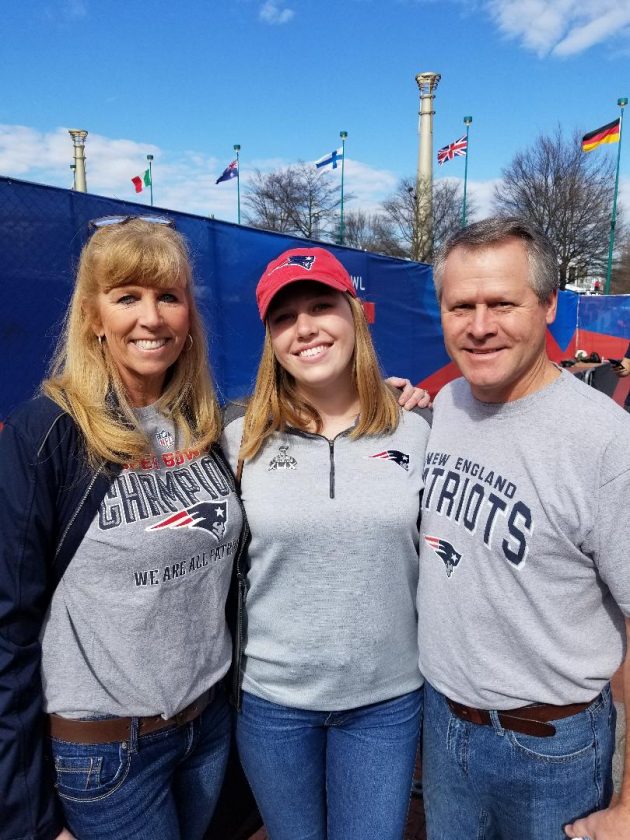 Fennelly and his group arrived in town Friday. They even brought with them a New Hampshire banner.

“It’s better than Minnesota (last year’s Super Bowl site),” he said. “Everybody’s been friendly, even though they don’t like Patriots fans. They’re pretending to be nice to us. They made us wait an hour and a half for our bags.”

“This is way better than Minnesota,” he said.

The most excited of the group was Ellison, who is attending his first Super Bowl. 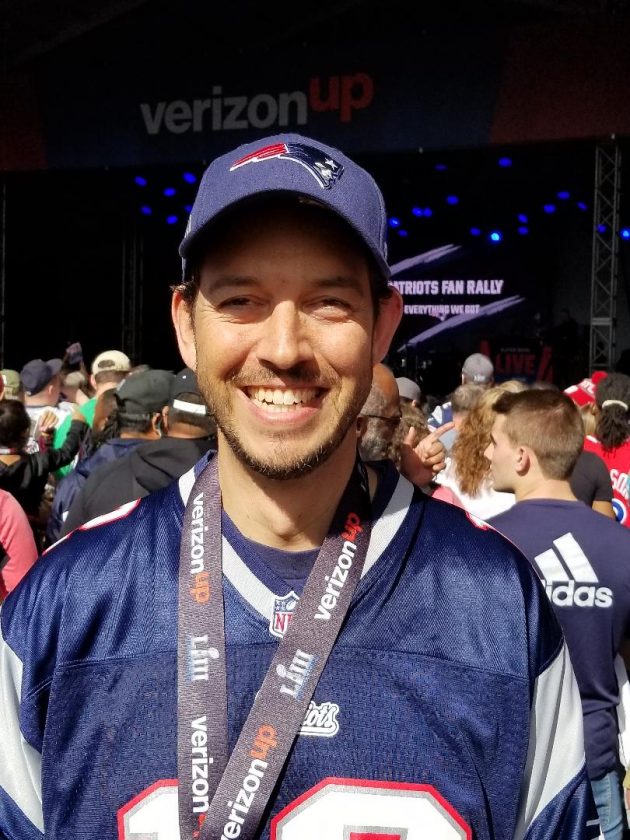 While these local residents made it, there were a few former locals attending the Patriots fan rally Saturday.

Nashua High School alums Dennis (class of 1983) and Suzanne Levesque (1984) moved to Wisconsin in 2002 but have been to a couple of Patriots Super Bowls since, last year and the Super Bowl in Glendale, Arizona, four years ago. This time, the couple, who met at Nashua High, brought their 20-year-old daughter Maddie with them.

“He was a hockey player, wasn’t he?” Leveque said. 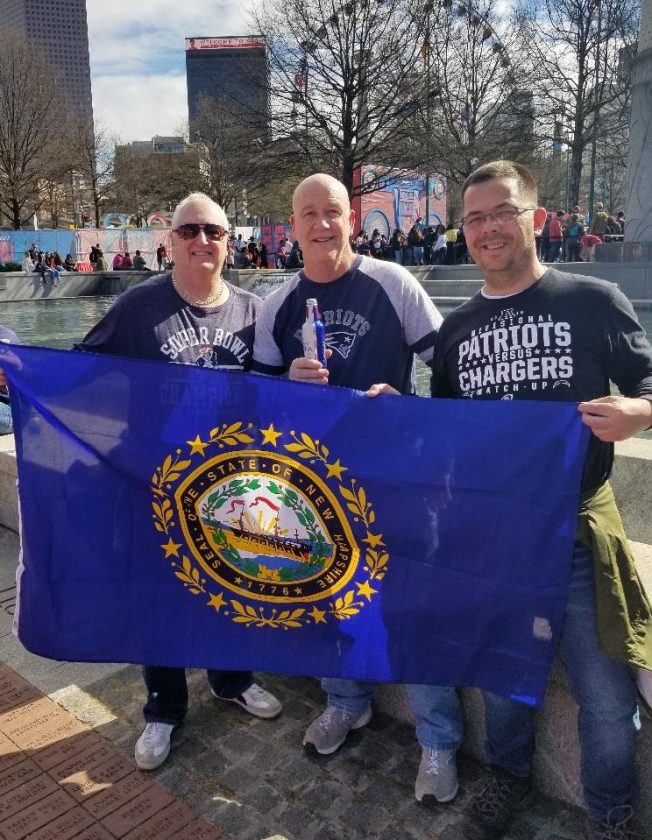 The family made the plans during the third quarter of the Patriots’ AFC Championship game win over the Kansas City Chiefs.

Meanwhile, former Brookline resident Kirk Orgeldinger was on hand at the rally, flying in from his home in Austin, Texas. Orgeldinger used to work for BAE Systems in Nashua and was transferred to Texas. He lived in Brookline for about 10 years.

“We’ve always wanted to go, my sister’s (Tara, who lives in the Sterling, Massachusetts, area) has been a fan her whole life, and we decided to meet up here,” Orgeldinger said. 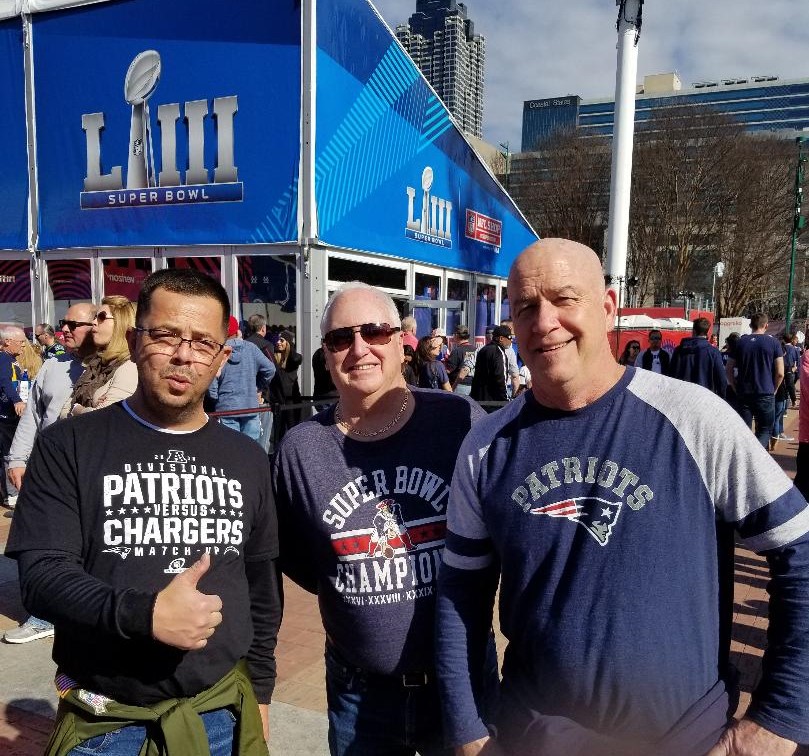 The family made the plans right after the AFC title game, as well.

“After they won, we ended up kind of getting together real quick and said, ‘We’re doing it.’ Every year we debate it if the Pats go, and we said, ‘This is the year. We’re going.’ It’s great.”

“I do,” he said. “Austin’s pretty crowded. Brookline was small and quiet. It was nice, and Nashua, too.”

Scheduled to arrive late Saturday night in Atlanta was Milford’s Dave Stauble. He and his good friend, Dan Haggerty, who owns a cocktail mixing company in Nashua, were at a party celebrating the birthday of Stauble’s 1-year-old son when a text came to Stauble from a friend who plays in a large band that does functions all over the country, including Super Bowls. Stauble works in the music industry.

“He’s pretty connected and he said, ‘You want to go? I can get you face-value tickets,'” Stauble said. He and Haggerty looked at each other and said, “Let’s do it.”

In case you’re wondering, that face value for two seats in the Rams endzone section went for $950 each, Stauble said.

“I was only thinking of going to a Super Bowl as a possibility some day,” Stauble said. “But getting them at face value, yeah, that was the thing. Not huge, huge money.”

And Stauble had friends living just 20 miles outside Atlanta. Bingo, no big hotel bill, and the pair will stay with them.

“My friends (in Atlanta) really came through,” Stauble said. “This is going to be such an exciting experience.”

Then, there’s Dave Frick, a former Londonderry resident who has lived in Atlanta for the last five years. He enjoys it.

He’s also keeping a flicker of hope alive for a Super Bowl ticket.

Holly Morrissette works as a nanny in Derry, and she and her travel crew also are hoping for tickets. They’ve been in Atlanta since Wednesday.

“We’ve been doing all the experiences and having a blast,” she said.

There are others from New Hampshire and with Nashua area connectes in town, too.

Bishop Guertin High School boys lacrosse coach Chris Cameron was in the region, as luck would have it, as his son Brian, a freshman at the University of North Carolina, was set to make his debut Saturday for the Tar Heels against Mercer University in Macon, Georgia, about 84 miles southeast of Atlanta.

“I’m working on a ticket,” Cameron said before leaving.

Also, renowned actor Michael Chickliss, a Nashua native and Guertin alum, is also said to be in Atlanta for the game.

The Patriots hosted what has become their customary team/family photo inside the Super Bowl venue, in this case, Mercedes-Benz Stadium.

“This is a dream for every player to play in this game, so to be able to share it with loved ones and family is special,” Patriots coach Bill Belichick said in the pool report issued by the NFL. “We have tried to embrace it.”

The Patriots were slated to have a meeting Saturday night and another one on Sunday morning.

“Just us circling the wagons and playing for each other,” Belichick said. “We’re playing a good team, and we are going to have to play our best game of the year.”

The L.A. Rams, meanwhile, had meetings and a walkthrough at their team hotel before heading to Mercedes-Benz Stadium, also for a team/family photo. The Rams are fully healthy as safety Blake Countess and kicker Greg Zuerlein, who had foot injuries, practiced Friday. The players will have a walk-through and a stretching procedure Sunday morning, due to the length in-between Super Bowl halves.

“It’s great,” Rams coach Sean McVay said of the photo day. “This is something I’ve never really been a part of. It’s really special. … I think it’s definitely something you want to cherish.”