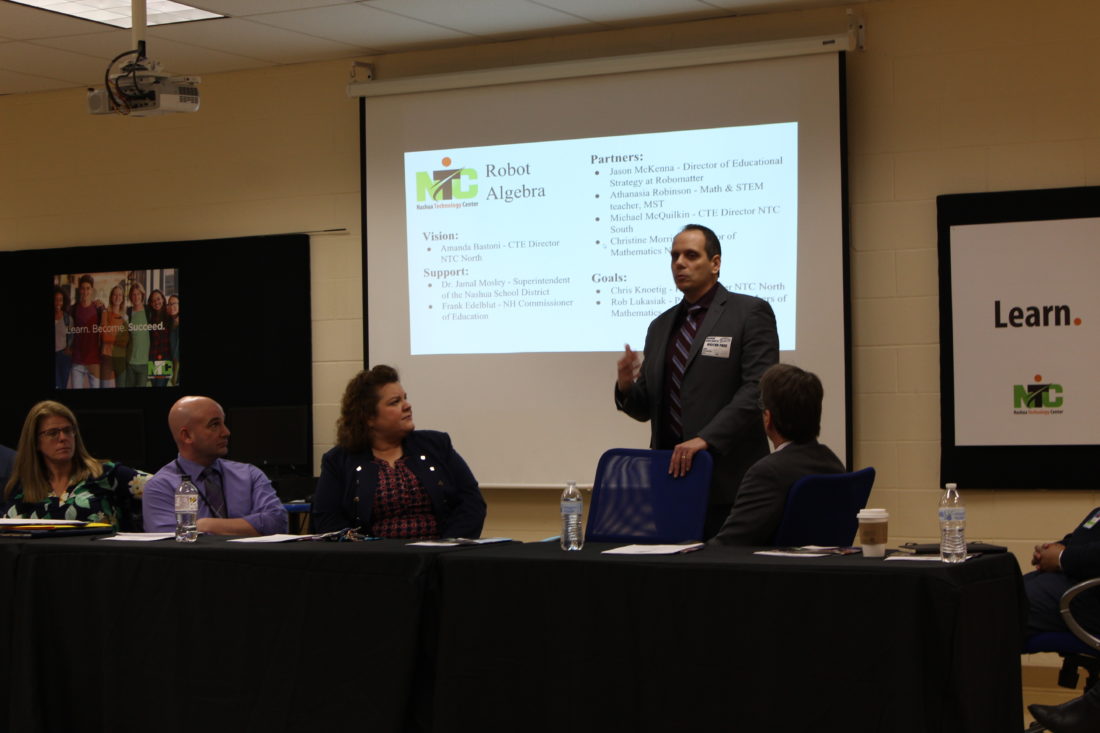 NASHUA – The conversation surrounding the creation of a Robot Algebra 1 pilot course at Nashua High School North continued Friday at a Launch Party in the school’s Career Technology Center.

This time around, a wide range of state and local educators got the opportunity to learn more about the project and to hear from a panel of speakers, including state Commissioner of Education Frank Edelblut, Teachers of Mathematics board president Rob Lukasiak and Jason McKenna, a representative of Robomatter, a Pittsburgh-based technology and engineering curriculum consultant.

The state Department of Education in September awarded the Nashua Technology Center a $50,000 grant to pilot a Career Technical Education-based Algebra I course for the 2019-20 academic term, with the help of various representatives through research and feasibility testing.

For Edelblut, awarding the grant was an easy decision: he was eager, he said, to find people as interested as he is in creating a hands-on approach for students to learn math.

In November, Lukasiak, along withDirector of Nashua Technology Center North Amanda Bastoni and Chris Knoetig, the head CTE teacher at North who will be teaching the Algebra 1 VEX Robotics class, visited Pittsburgh to meet with Robomatter’s McKenna and its CEO, Tim Friez. Robomatter has partnered with Carnegie Mellon University to conduct research on how to use VEX robotics as a tool to create Algebra 1 courses.

Bastoni, Knoetig and Lukasiak were able to bring home what they learned in Pittsburgh and further develop a plan for the course.

This year-long course that will offer credits in both VEX Robotics and Algebra 1 will be offered to freshmen who have not yet taken Algebra 1.

Director of Nashua Technology Center South Mike McQuilkin has been working with Pennichuck Middle School to identify students who would be interested in enrolling in the course. During the meeting, McQuilkin said they plan to have 16-20 students in the course and will be meeting with students and their parents individually.

The goal of this course is to target students who would benefit from a hands-on approach to learning Algebra 1.

During the meeting, it was discussed by multiple people that standard math classes don’t work best for everyone.

Christine Morris, a professor at Nashua Community College, said she wanted to get involved with this project after seeing for so long students forget what they had just learned in class the next day or not apply their learning.

At the end of the discussion, those who attended were able to ask questions.

“Skeptics in the room, I am glad you are here,” Bastoni told the crowd. As part of a pilot project, many factors had to be considered, such as whether a student would be able to integrate back into the next level math class without a problem, and how they would be able to keep students engaged.

McKenna offered tips and knowledge from his past experiences during the meeting. His suggestions included not trying to do too much in the class, keeping the class targeted with what needs to be taught, making sure students understand conceptually what they are doing, not assuming just because robots are in the classroom, the students will stay motivated, maintaining engagement throughout the year and allowing students to learn in different ways.

The next step in moving forward with the project will be writing the class’s curriculum.

Grace Pecci may be contacted at 594-1243 or gpecci@nashuatelegraph.com.