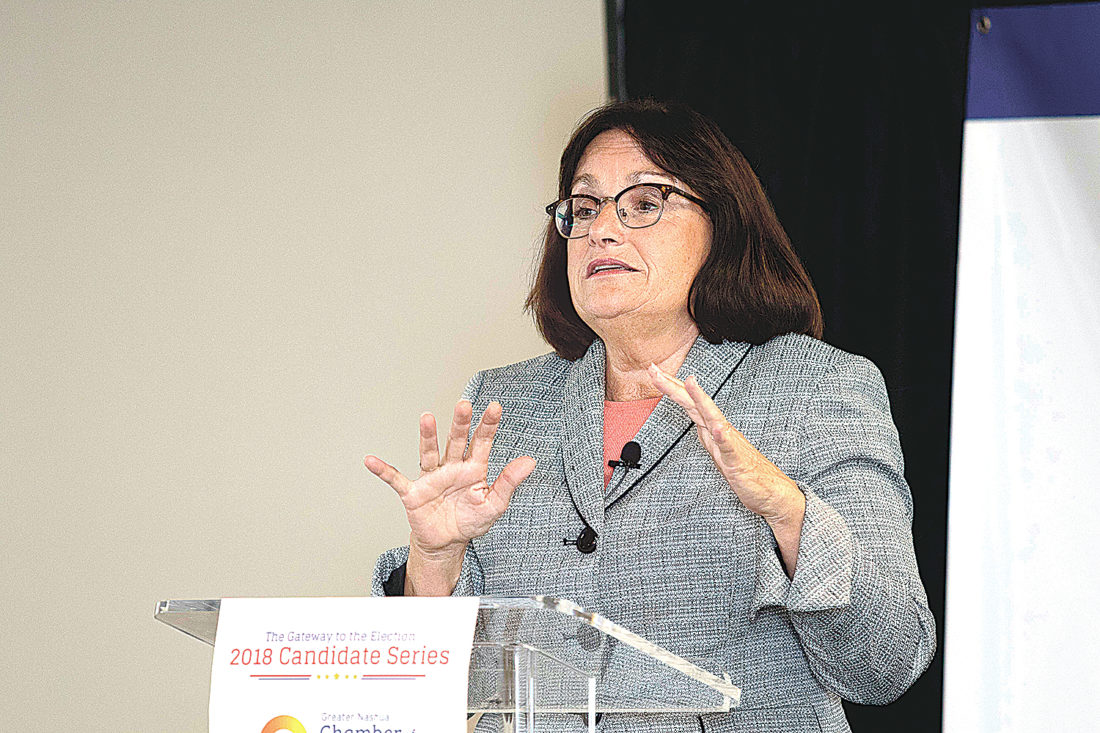 NASHUA – “Resist, obstruct and impeach. That is the game plan of the Democrats,” Republican congressional candidate Steve Negron said during a Thursday forum, while sharing the stage with incumbent U.S. Rep. Annie Kuster, D-N.H.

Kuster insists she is not committed to voting to impeach President Donald Trump should the Democrats regain control of the House of Representatives as a result of the Tuesday general election. She does, however, take issue with Trump sending more than 5,000 troops to the U.S.-Mexico border to intercept the caravan of Central American migrants.

“We should be sending lawyers and judges for the asylum claims of these people,” Kuster said. “They are fleeing oppression.”

Impeachment, immigration, gun control, economic development, Social Security, opioids and health care are just some of the issues Kuster and Negron discussed during the Thursday forum, which took place at the Holiday Inn and Suites in Nashua.

This was the third and final event in The Gateway to the Election: 2018 Candidate Series. The series was a partnership of the Greater Nashua Chamber of Commerce, Rivier University and The Telegraph. 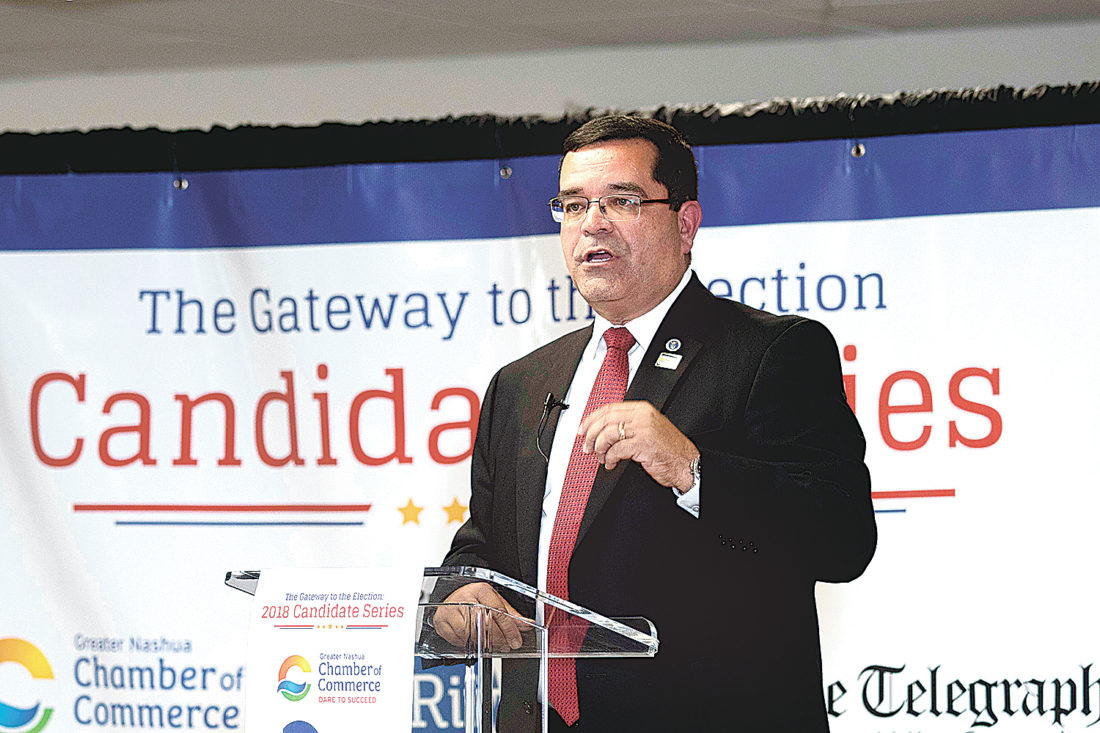 Initially elected in 2012, Kuster is seeking a fourth two-year term in the House of Representatives. She and Negron, a Nashua resident and current state representative, are vying for a seat in New Hampshire’s 2nd Congressional District, which covers about two-thirds of the state’s landmass. Nashua and Concord are the district’s largest cities.

Negron said his grandfather moved to the U.S. from Mexico in the 1920s, so he appreciates the fact Latinos want to migrate north. However, he said they should follow an orderly and legal process. He supports strengthening and defending the nation’s borders.

“We understand that immigrants are the foundation of our country,” he said.

Kuster said she supports comprehensive immigration reform. During the summer, she traveled to the U.S.-Mexico border to express her displeasure with the Trump administration’s policy of separating immigrant children from their parents.

“Immigration strengthens our communities,” she added.

Negron accused Kuster of aligning with House Minority Leader Nancy Pelosi, D-Calif., with plans to impeach Trump if the Democrats succeed in gaining the majority. Kuster said she disagrees with Trump on a plethora of issues, but said she is not committed to voting to impeach him at this time.

“The talk is way too early,” Kuster said. “Any discussion of impeachment would be premature.”

An impeachment by the House would not, by itself, result in Trump’s removal from office. Per the Constitution, 67 senators (or two-thirds of the Senate) would have to concur with the articles of impeachment for this to occur.

Negron said he does not see any grounds for impeaching the president, as he believes those in favor of such an act simply disagree with Trump’s policies.

When the discussion shifted to guns, Kuster said she supports the right to bear arms as provided by the Second Amendment. However, she cited the tragic shooting Saturday that resulted in 11 deaths at the Pittsburgh Tree of Life Synagogue as a reason for enhanced gun control.

“We need to close the background check loopholes,” Kuster said, adding that a member of the “MS-13” gang should not be able to walk into a gun show and walk out with a firearm.

Negron said more focus needs to be on the “mental health issue,” which he said is the “genesis” of such gun violence.

“This is a constitutional right that was given to us,” he said of the right to bear arms. “You want to throw the blame on the 99 percent of people who are lawful gun owners.”

Kuster said she believes bringing passenger rail service to New Hampshire is one way to continue growing the economy.

“I will fight to bring rail to Nashua,” she vowed.

Though Kuster said she believes New Hampshire’s 2.7 percent unemployment rate is a good sign, she said other economic indicators are not so positive. She also said Trump’s tariffs on imported steel and aluminum are hurting New Hampshire businesses.

“If you’re selling yachts, this is a great economy,” Kuster said.

However, unlike Democratic gubernatorial nominee Molly Kelly, Kuster did not indicate she wants to see a major hike in the minimum wage. Rather, she supports helping residents improve their skills to give them a chance to land a better job.

Negron said the term “minimum wage” should be changed to “starting wage.” He also supports an increased emphasis on career and technical education, as he said not everyone should plan on attending a four-year college.

Negron also said he disagrees with Pelosi’s characterization of Trump’s tax cuts as “crumbs.” He said as a business owner, the cuts allowed him to add employees, though he did not specify how many.

Both candidates strongly support taking the necessary steps to ensure the solvency of Social Security.

“I firmly believe that is a right, and we need to protect that,” Negron said.

“I am going to fight every single day for those benefits,” Kuster added.

Kuster also said she strongly believes in the Affordable Care Act, commonly known as Obamacare, because she said it has improved the lives of those who previously may not have qualified for health insurance due to pre-existing conditions.

The candidates agree New Hampshire’s opioid epidemic is likely the state’s premier challenge. They differ slightly on the solution, however. Negron said $43 million worth of federal money destined for the state to battle opioid addiction will not end the crisis because elected officials do not pay enough attention to those who are “on the ground” in the fight.

Kuster, however, said the money is vital because, “These local communities do not have the resources to deal with this.”

When asked about term limits, Negron highlighted his Wednesday signing of the U.S. Term Limits Amendment pledge, which advocates for limits of three House terms and two Senate terms.

Should she be re-elected, Kuster did not say how long she would serve, but replied, “I am not going to do this job forever,” when posed the question about term limits.

Kuster said she understands many voters are getting fed up with the two major political parties.

“Frankly, 40 percent of the people I meet are independents. They are done with both parties,” she said.

As a fellow Republican, Negron said Trump is taking steps needed to ensure the U.S. is respected as the world’s preeminent power.

“Let me tell you what this president has done. He has put this country back on the world stage,” Negron said of Trump. “We have regained our standing on this world stage.”

Both candidates encouaged voters to cast a ballot in Tuesday’s election. Republicans currently control 235 seats in the House of Representatives, while Democrats occupy 193. There are seven vacancies.