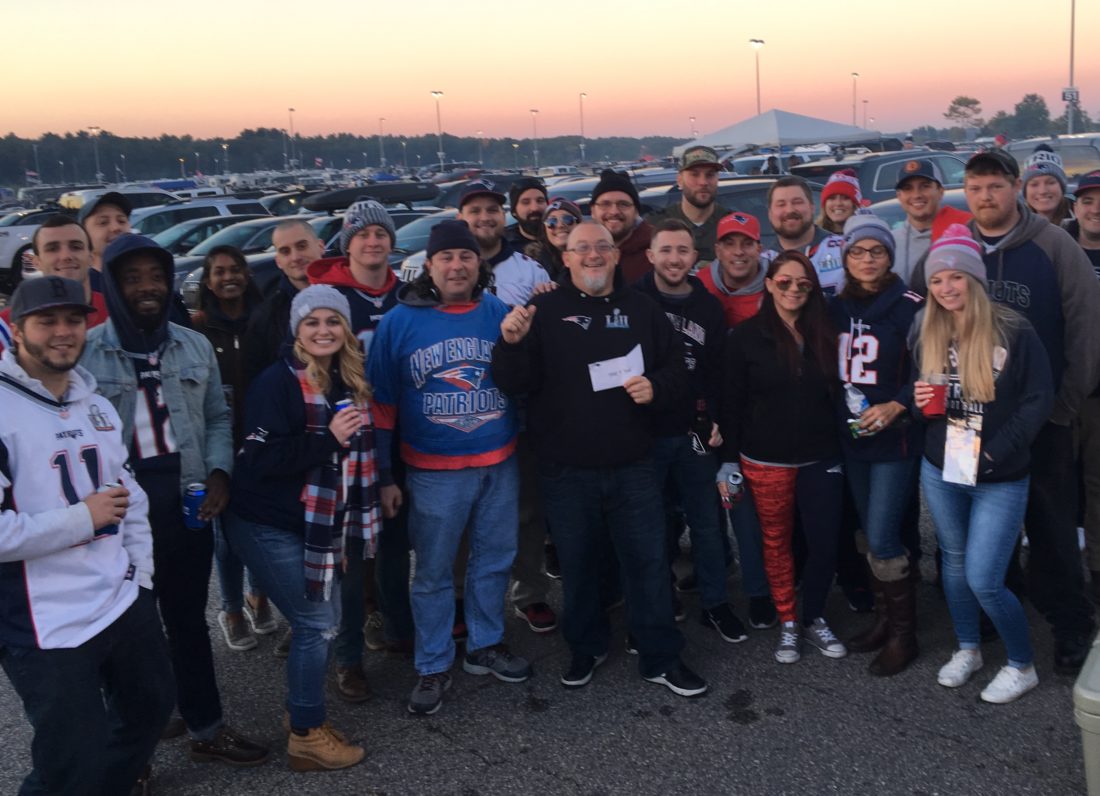 Courtesy photo ‘Captain Jack’ Colon, Nashua Country Club soup master and Sunday’s winner of the New England Patriots “Tailgate of the Game,” stands with fellow tailgaters he served at the game against the Kansas City Chiefs.

Presented by the Patriots and Stop & Shop, the prize was a $100 gift card and an appearance on the Jumbotron.

This is Colon’s second victory in the program, as he was also a winner during the 2012 season.

For Colon, tailgating is about more than just the food and drinks. It’s about the people surrounding him.

“I enjoy making people happy when they eat,” Colon said. “I’m very fortunate. I’ve met a lot of good people over the years. I’ve made a lot of connections.”

Colon tailgates before every Patriots game that takes place at Gillette and has been doing so for the last 10 years. Colon said he generally begins preparing for each tailgate a couple days in advance. Colon’s menu consists of appetizers such as grilled loaded potato skins, cheese and crackers, chips and salsa, marinated wings, scallops and bacon, Captain Jack’s famous steak tips, along with soups such as Chicken Pot Pie Soup.

Colon said he usually gets a turnout of 30 to 40 people at his tailgates. He’s gotten a lot of recognition through the years for having “one of the better tailgates.”

Colon sets a designated meet-up area for his tailgate and said tailgaters tend to give him about $25-$30. In turn, Colon’s tailgaters get their money’s worth. “I don’t want anyone to ever say, ‘I spent that money and I’m still hungry,'” Colon said.

Colon donates passes to his tailgate to The Boys & Girls Club of Greater Nashua, The Front Door Agency and to Bishop Guertin High School fundraisers, he said.

“The Captain loves giving back to the community,” Colon added.

Grace Pecci can be reached at 594-1243 or gpecci@nashuatelegraph.com.