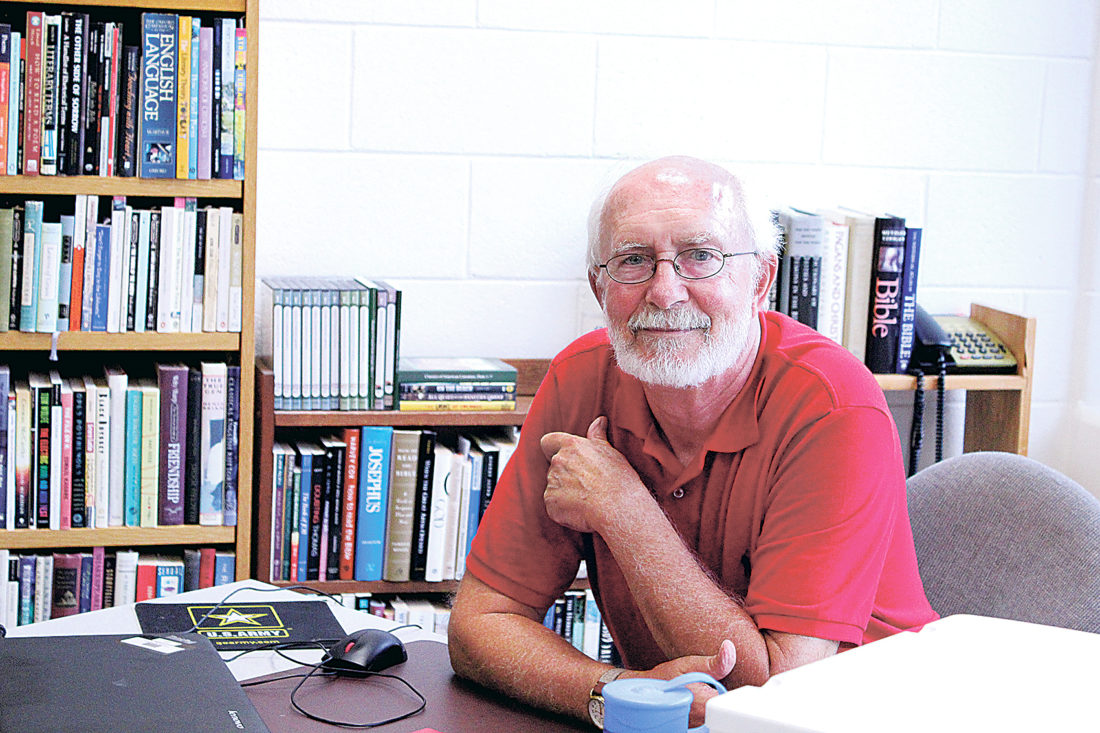 HOLLIS – With a love for literature and learning, Michael Fox, wanted to stay in school for the rest of his life, so he became a high school English teacher.

Now, 50 years later, just as curious, still taking every opportunity to learn, Fox has taught close to 4,000 students – and has no plans of stopping any time soon.

A voracious reader, he starts his days with poetry to engage the brain and teaches English to students at Hollis Brookline High School throughout the day. He also re-reads the books he assigns every year, and even takes intensive courses at the Classical Association of New England and similar programs during the summers.

Still, he looks forward to going to work and surrounding himself with books and students every single day.

“But really, if I wake up and get in my car to go to work and I’m not looking forward to it anymore, that’s when I’ll consider retiring,” Fox said.

This being said, for Fox, who is in good health, teaches “bright kids” and works with “bright colleagues,” it does not seem to be on the table.

“Why leave it behind?” he said.

After 50 years, teaching several generations of students (soon, he suspects he will see former students’ grandchildren in his classes), even working with former students, there are not too many moments that stand out above the rest.

“I don’t really look back,” Fox said, “The best moment is the one I had today” and hopefully that will change tomorrow.

“There’s nothing I can do about what happened,” he said, adding that until last week, he truly had no idea he had been teaching for so long.

Through the years, there have been a lot of changes in the field, not least of all the invention of word processing systems, which Fox said “revolutionized” the process of writing. Previously, if a teacher asked someone to rewrite something, it could be a laborious task. Now, a student might find it annoying, but it is relatively simple.

He has tried to keep technology from invading his classroom too much and still uses physical books for assignments. “They spend enough time looking at screens,” he said of his students.

The schools have changed as a whole, too, he said, noting that now “we do more to keep as many students in school as possible,” such as offering more services (paraprofessionals, behavioral health specialists, school psychologists and others) that were not available when he started teaching.

Students, too are different, he said.

“Kids are under a lot of pressure. They used to be able to graduate, go to college, get a job in their field and stay there the rest of their lives. Now, the competition for good schools and good jobs is more intense,” he said, although he said this competition also makes them hard-working and self-motivated.

Because students are so involved and “so darn busy” these days, it can be challenging to get them to take the time to read or write an essay. Sometimes, Fox said, he will be standing in his classroom, asking questions about a reading assignment and think, “I’m the only one who has read this.”

However, Fox tries to make his assignments manageable and engaging. “The Iliad,” one of his favorites, can be challenging for students. He keeps pins in the classroom for students who read the entirety of the book, but only hands out three or four per year. When he tells them they are going to be reading portions of the Bible’s Old Testament, “they look at you cross-eyed.” When they get into it though, most of them find it “fascinating.”

“I love reading and teaching the Bible,” Fox said. “It’s exceptionally rich, there are lots of characters, lots of stories. It can be interpreted many ways… it’s endlessly challenging.”

Fox is not a fan of teaching what he calls “adolescent literature” or contemporary fiction, believing instead that “school reading should be a little difficult.”

Of course, some books are easier to teach than others, so he tries to pick works that are significant without having a teacher guide students through every word. What makes a great book is going to be different for everyone, but to him, it is “something you want to go back to again and again and again.” He acknowledges that “you grow into certain books as you grow older.”

This is part of why he enjoys teaching high school students – their age allows them to interact with the texts in they way he wants to teach them. Plus, he really enjoys kids.

“If you enjoy being around kids, enjoy their naivety… their goofiness, teaching might be a good job for you,” he said. “They keep me young.”

Last week, Fox was honored in front of his colleagues for his 50 years of teaching, and was joined on stage by all the graduates who then went on to teach in the district after high school. The stage was full, and Fox had taught most of them, Superintendent Andrew Corey said at the time.

This, Fox said, is a testament to the strength of the district and the community that supports education. When he came to Hollis from Maine 50 years ago for a job, he found a “great place to work,” he said, “and I never left.”