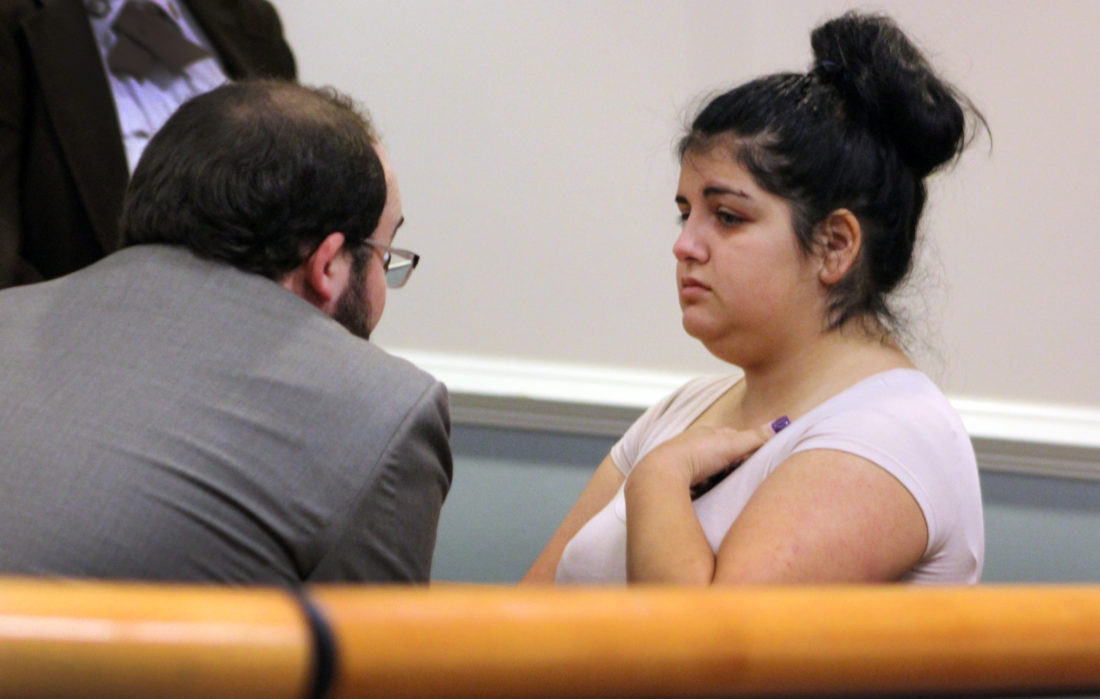 Staff photo by Dean Shalhoup Kiana Moudarri speaks with her lawyer, Ryan Guptill, during her plea and sentencing hearing Tuesday on charges stemming from a February 2017 police pursuit. She was given suspended prison and jail sentences.

NASHUA – Kiana Moudarri, who on Tuesday pleaded guilty to three charges stemming from a 2017 police pursuit in which she nearly hit a Nashua officer, took the unusual step of chiming in while the judge was delivering his sentencing comments during her hearing.

But instead of taking offense, Judge Charles Temple told Moudarri, 21, that he was “glad to hear you say that” when she agreed aloud with Temple’s assertion that officer Richard Sprankle, whom she almost hit, deserves a “meaningful” letter of apology.

Moments later, Moudarri, a Lowell, Massachusetts resident who lived briefly in Nashua, broke into tears of relief and softly uttered “thank you” as Temple announced his decision to spare her time behind bars, as long as she abides by a series of conditions.

Moudarri, a dark-haired, soft-spoken young woman who was accompanied to court by her mother, went into Tuesday’s hearing facing up to three years in State Prison, the sentence that Assistant County Attorney Cassie Devine recommended.

According to Moudarri’s plea agreement, she entered guilty pleas to one count of reckless conduct, a felony, along with one count each of endangering the welfare of a child and disobeying a police officer, both misdemeanors.

The conditions order Moudarri to stay out of trouble, serve one year of probation, perform 25 hours of community service, write an apology letter to Sprankle, and take a tour of the New Hampshire State Prison.

Three other charges were dropped as part of the agreement.

The offenses stem from an incident on Feb. 8, 2017, during which members of Nashua’s Problem Oriented Policing (POP) Unit, in possession of warrants for Moudarri’s arrest, tried to stop the car she was driving as she exited a tow company lot after retrieving the car.

When officers initiated a traffic stop, according to police reports and the account Devine read in court, Moudarri locked the doors, backed up a short distance, then “put it in gear and accelerated rapidly” toward Sprankle, who Devine said was forced to push himself off the car’s hood to avoid being struck.

He and another officer pursued the car from downtown Nashua into Hudson, and back into Nashua before calling off the pursuit when Moudarri crossed into Massachusetts.

They subsequently issued warrants for Moudarri’s arrest, which resulted in her apprehension about a week later.

Moudarri was originally scheduled for a plea and sentencing hearing in April, but Temple continued it after learning that Moudarri was in jail at Massachusetts Correctional Institution-Framingham, according to reports at the time.

Attorney Ryan Guptill, Moudarri’s public defender, said Tuesday that since her release, his client has gone back to work as a home health aide and is “doing everything she can” to get on the right track.

Guptill told Temple the trauma and “toxic stress” Moudarri was exposed to as a child “left her with a lot of scars that carried over into young adulthood.”

While both Guptill, and Moudarri during a brief statement she read to the court, emphasized they were not using her difficult upbringing “as an excuse for her actions,” Guptill said “it helps to explain why she started taking the wrong direction … got involved in the criminal justice system.”

When she was confronted by police on Feb. 8, 2017, Guptill said, Moudarri “took off running because she saw a threatening situation … this is a classic example of what happens to someone exposed to toxic stress,” he added.

While police “did everything right,” Guptill said, Moudarri reacted with a “fight or flight” response, choosing to flee what she perceived as danger, such as the possibility that she’d be put behind bars for a substantial amount of time.

Moudarri began her statement to the court by apologizing “for putting not only myself, but my son and police officers, in danger. I’ll never forgive myself for the irresponsible decisions I made that day.”

Choking with emotion, Moudarri said “being away from my son was the worst thing that ever happened to me,” a reference to the time she was in jail and unable to see her 18-month-old son.

Jail time “had a major impact” on Moudarri, Guptill said, adding that her going to prison “would likely exacerbate the trauma that led to these crimes.”

Temple, meanwhile, credited Moudarri for apparently “doing everything in your power to address your issues in a positive way,” even when she was incarcerated.

He said his decision to spare her prison time was based in large part on those efforts, and because “we need to keep you on this path” of changing her life for the better.