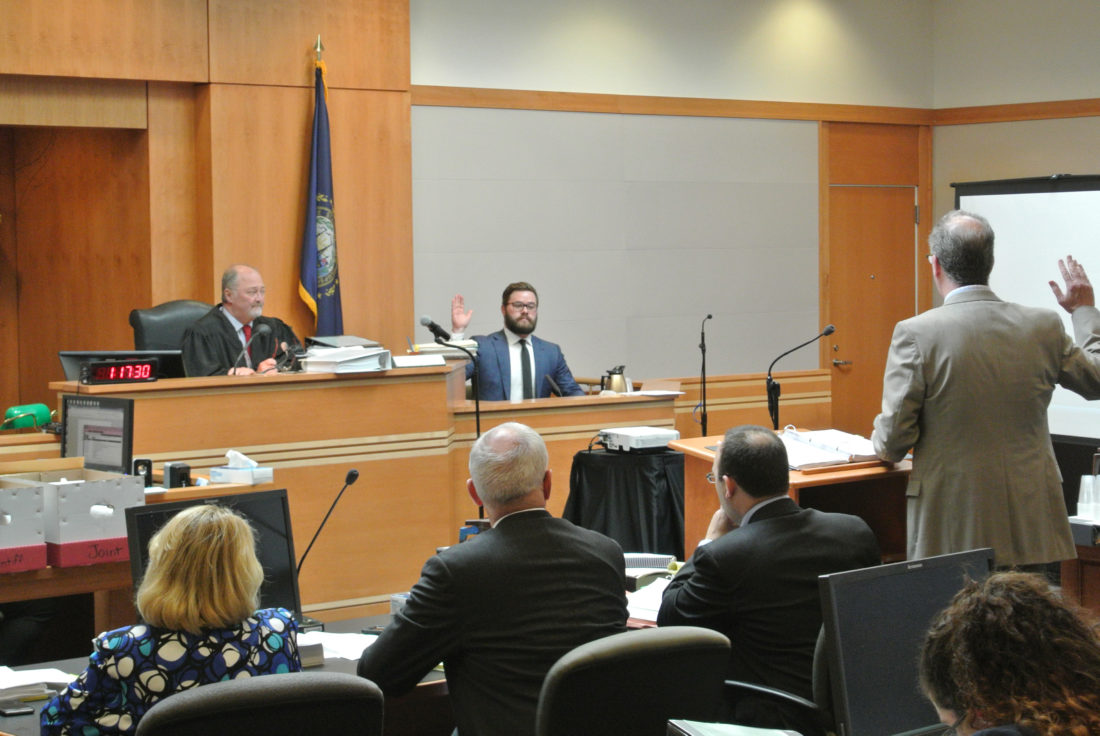 Staff photo by Damien Fisher Lucas Meyer, president of the New Hampshire Young Democrats, testifies Monday that his group has been spending money and conducting training sessions in the wake of the passage of SB 3.

MANCHESTER – More than a dozen lawyers are setting up shop in the Hillsborough Superior Court-North in Manchester for the next two weeks for the preliminary injunction hearing on the controversial voter residency law commonly known as SB 3.

Judge Kenneth Brown is being asked to stop the law from taking effect until after the lawsuit against the state — brought by the New Hampshire Democratic Party, the League of Women Voters, and some individual voters — is decided in court. This could mean the law, which critics claim will dampen college voter turnout, will not be in effect for the November midterm election.

Numerous witnesses are expected to testify, and the state is seeking to dig into the New Hampshire Democratic Party’s budget as part of the proceedings. Lucas Meyer, the president of the New Hampshire Young Democrats, testified Monday the state party has budgeted $150,000 to $250,000 for voter education in the wake of SB 3’s passage.

“The changes to the same-day voter registration form we see as confusing and intimidating to college students,” Meyer said.

organization has been on alert since the law was first proposed.

If those new voters lack the required documents, such as a utility bill or a letter from their college stating where they live for the school year, they will have 10 days after the election to provide the documents to avoid potential criminal penalties.

Meyer testified that the bill seemed designed to keep college students from voting, especially due to the potential fines of up to $5,000.

“The $5,000 fine is financially crushing to college students,” he said.

The legal challenges to the law began soon after Republican Gov. Chris Sununu signed it last year. The criminal penalties established by SB 3 have been suspended while the lawsuit is pending.

Judge Charles Temple originally had the case in Hillsborough Superior Court-South in Nashua, but he recused himself for a potential personal conflict.

If SB 3 survives the legal challenge, it may be moot, given the law Sununu signed this year, HB 1264. That law requires all voters, including college students, to follow normal New Hampshire residency requirements.

While critics have compared the law to a poll tax, the New Hampshire Supreme Court ruled HB 1264 passes constitutional muster after a review requested by Sununu.

The SB 3 hearings are expected to continue through the end of next week. A trial is the case has yet to be scheduled.