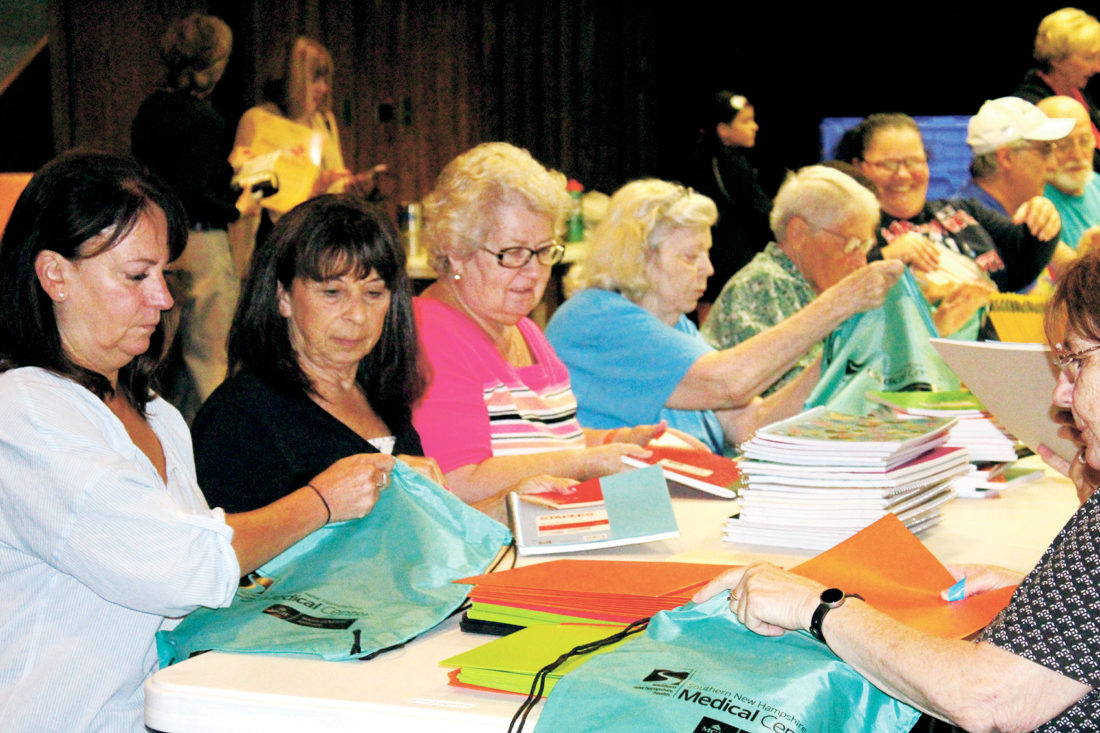 NASHUA – From behind stacks of notebooks and glue sticks, volunteers rapidly filling and then passing bags could be heard shouting for “more crayons,” while calling out, “We’re low on pencil packs.”

Approximately two dozen volunteers, many from the Retired and Senior Volunteer Program (RSVP) and Pennichuck Middle School Student Council, were tasked with filling 1,500 bags with school supplies Wednesday morning in preparation for the annual Nashua Goes Back to School event. It is set for 5-6:30 p.m. today at the Nashua Public Library, 2 Court St.

June Caron is the head organizer for the event. On Wednesday, she warned the group in charge of restocking the tables with supplies that the bag stuffers, several of whom had done this for many years, moved through the line quickly, adding glue, crayons, erasers, ear buds, notebooks, pencil packs and other supplies with remarkable speed.

Within an hour, the seemingly gargantuan task of going through all the boxes of supplies lining the walls seemed far more manageable, with the stack of supplies growing smaller as the stack of blue tubs with ready-to-go bags grew increasingly taller.

The school supplies will be distributed to Nashua students tonight. Students can collect their bags, meet their administrators and, with or without parents, learn about many of the organizations and opportunities that support the area’s youth. The event typically draws close to 1,500 students every year, and during the last 13, it has become a back to school tradition throughout the city, organizer Mary Ann Melizzi-Golja said in an earlier interview.

Mary Sullivan is a volunteer with RSVP and has been helping to fill bags for more than a decade, or as she put it, “as long as they’ve been doing it.”

“There are too many kids who don’t have school supplies and they’re so costly now,” she said.

Sullivan’s friend, Sally Verranault, who is in her second year volunteering, said she heard one mother spent over $100 just on supplies, so she hopes the event can help ease the financial burden for some families.

“It’s a wonderful event,” Verranault said, “and I like that it’s for every child — not just low income kids.”

“My kids were in the school system and we needed that help sometimes,” Ramos said. Phelps agreed, adding, “This is our way of giving back and saying ‘thank you’ for the years we had that.”

“I think more people should volunteer for this,” Sullivan said. “It’s a great event and it’s just once a year.”