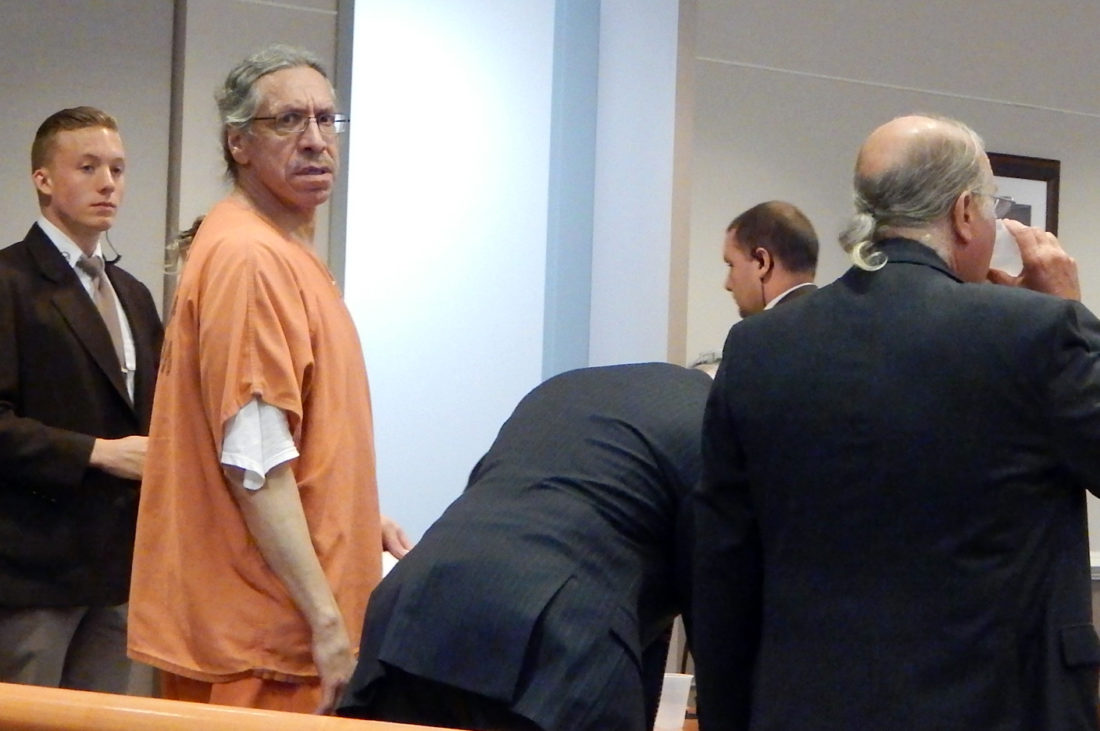 Staff photo by Dean Shalhoup Anthony Barnaby glances toward the gallery after arriving in Hillsborough County Superior Court South Monday for a hearing regarding his upcoming trial.

NASHUA – Matters ranging from the estimated length of Anthony Barnaby’s upcoming double-murder trial to the number of peremptory strikes each side will be allowed during jury selection were among the topics addressed Monday at Barnaby’s trial management conference.

The hearing, over which Judge Jacalyn Colburn presided in Hillsborough County Superior Court South, sets the stage for a Thursday motions hearing, which could be the final one before the start of jury selection on Aug. 27.

Thursday’s hearing is set for 10 a.m. in Courtroom 4 in the Nashua court.

Barnaby, now 51, has spent nearly four years in Valley Street Jail awaiting what will be his fourth trial for the October 1988 murders of Charlene Ranstrom and Brenda Warner.

He faces two counts each of first-degree murder and second-degree murder in connection with the beating and stabbing deaths of the women, who lived upstairs from Barnaby in a Mason Street apartment building.

Barnaby’s friend and fellow Canadian native David Caplin, who was also charged in the murders, reached a plea agreement with prosecutors in February. In exchange for his guilty pleas to two counts of second-degree murder – two counts of first-degree murder were dropped as part of the deal – Caplin was sentenced to two consecutive 10-20 year prison terms.

Caplin also agreed as part of the deal to testify against Barnaby, if called to do so.

Assistant Attorney General Susan Morrell, who is prosecuting the case with Assistant Attorneys General Carl Lazarus and Elizabeth Woodcock, said Monday there are about 80 names on the state’s witness list, which has been filed with the court.

The state also requested a jury view of the scene of the murders, to which the defense agreed and Colburn granted.

As for the defense’s witness list, attorney Mark Sisti told the court the list is awaiting the judge’s order regarding two potential witnesses – attorneys Cathy Green and Ray Raimo.

The conflict stems from the fact that Green and Raimo, who represented Caplin, have been appointed by the court to again represent Caplin if, and when, he is called to testify.

Colburn, the judge, said the court will revisit the matter at Thursday’s hearing. Also to be addressed Thursday will be Sisti’s request to double, from 15 to 30, the number of peremptory strikes each side will be allowed.

As for what Colburn should tell prospective jurors regarding the trial’s length, the sides settled on two weeks for jury selection and six weeks for the testimony phase.

While the court has received recusal requests from some of the 500 people summoned for jury selection, Colburn said most will report on Aug. 27 – half in the morning and the other half in the afternoon.

Given the gravity of the case, the jury will have four alternate jurors instead of the usual two, Colburn said.

She also agreed to consider one of Sisti’s final requests: To set aside reserved parking spaces for him and his co-counsel, attorney Alan Cronheim.

Morrell, on behalf of the state, promptly agreed: “The state would love reserved spaces,” she said.

Colburn assurred them that if it’s possible to reserve spaces, both sides would benefit.

“Don’t worry,” she said with a smile, “I wouldn’t give (reserved spaces) to one side and not the other.”