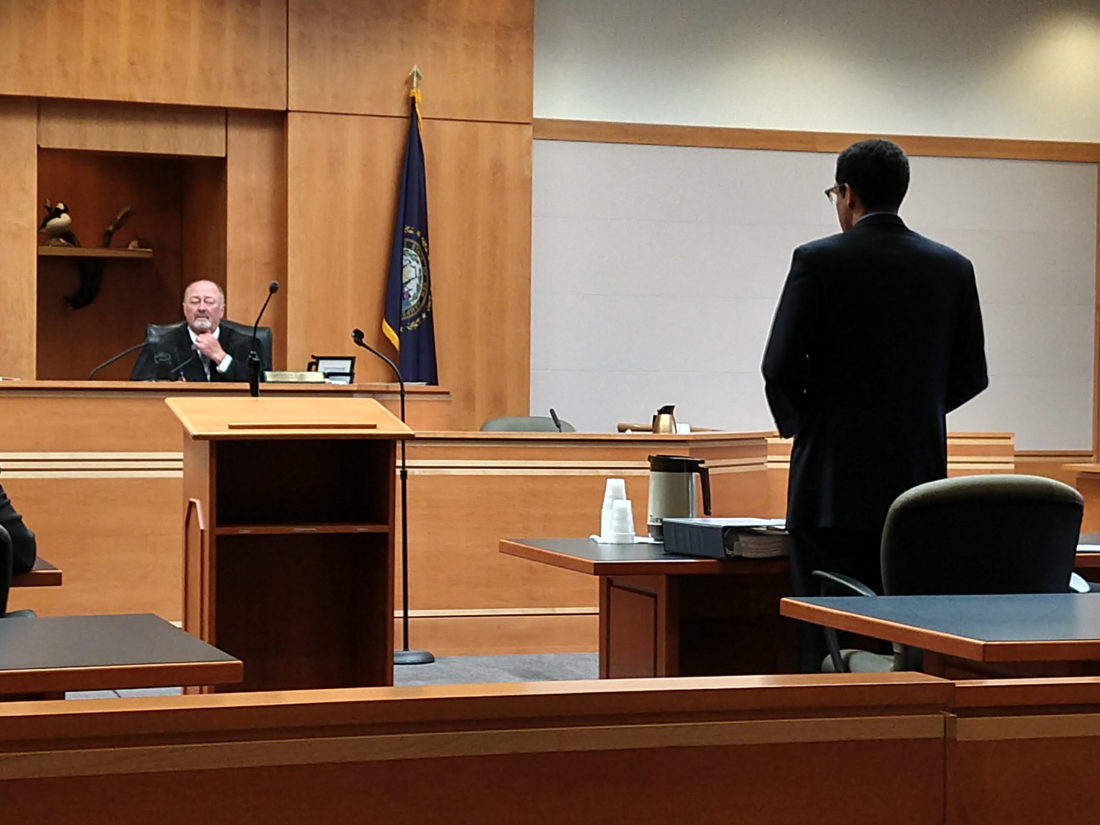 Staff photo by Damien Fisher Hillsborough Superior Court-North Judge Kenneth Brown on Monday tells Bruce Spiva, who is representing the League of Women Voters, the scheduled Aug. 20 trial in the SB 3 case will not be held.

MANCHESTER – The saga of New Hampshire’s voter residency requirement law, commonly known as SB 3, began amid allegations by Republicans that people from Massachusetts crossed the border to cast Democratic ballots during the 2016 presidential election.

On Monday, the latest development in the matter saw Hillsborough Superior Court-North Judge Kenneth Brown call the trial schedule for SB 3 unrealistic, as he pushed back the planned Aug. 20 trial.

“It’s not going to happen this August. I think we should look at it more realistically,” Brown told attorney Bruce Spiva, who is representing the League of Women Voters in the case.

Spiva was pushing to keep to the Aug. 20 trial date. Instead, Brown will oversee hearings during the week of Aug. 27 on whether to issue a preliminary injunction against the state to keep it from enforcing the law ahead of the November midterm elections.

Brown took on the case this week after Hillsborough Superior Court-South Judge Charles Temple stepped aside, citing a conflict of interest because of a personal relationship with one of the lawyers working on the case. In his ruling taking him off the case, Temple wrote that the change of judges should not delay the case schedule.

One of the major issues at play in the case is a New Hampshire Supreme Court review of Temple’s order from earlier this year, which requires state officials to hand over copies of the statewide voter database to the plaintiffs: the League of Women Voters and the New Hampshire Democratic Party. The high court could reverse Temple’s ruling, throwing much of the evidence prepared by the plaintiffs into question.

“You can’t try the case without that information,” Brown told Spiva.

Spiva argued for pushing forward with the planned trial, saying he expected an expedited ruling from the Supreme Court before the end of July. That would give both sides just enough time to prepare for the Aug. 20 trial, according to Spiva.

Assistant Attorney General Anthony Galdieri balked at the idea of going forward with the trial, saying there are still too many outstanding issues concerning motions to quash subpoenas, motions to exclude some witnesses, and depositions to still take before the trail can start.

“It’s virtually impossible to have a trial in August,” Galdieri said.

The state is pushing for a trial sometime in April, well after the November elections and after New Hampshire’s traditional Town Meeting election season. Short of a trial, Spiva said he has enough evidence to seek the preliminary injunction against the state. The could keep the state from enforcing SB 3 during the midterms while the trial is pending. Temple ruled last year to block the state from enforcing any criminal penalties written into the law.

The SB 3 lawsuit started last year, after Gov. Chris Sununu signed the law, which creates possible criminal penalties for people who register to vote on election day, but fail to provide evidence they are legally entitled to vote within a certain timeframe. The lawsuit, brought by the state’s Democratic Party, the League of Women Voters, and some individual voters, claims the law will discourage poor, minorities, and college students from voting.

Though no schedule for the trial has been set yet, Brown ordered all the attorney’s to be present for the preliminary injunction hearings in August.