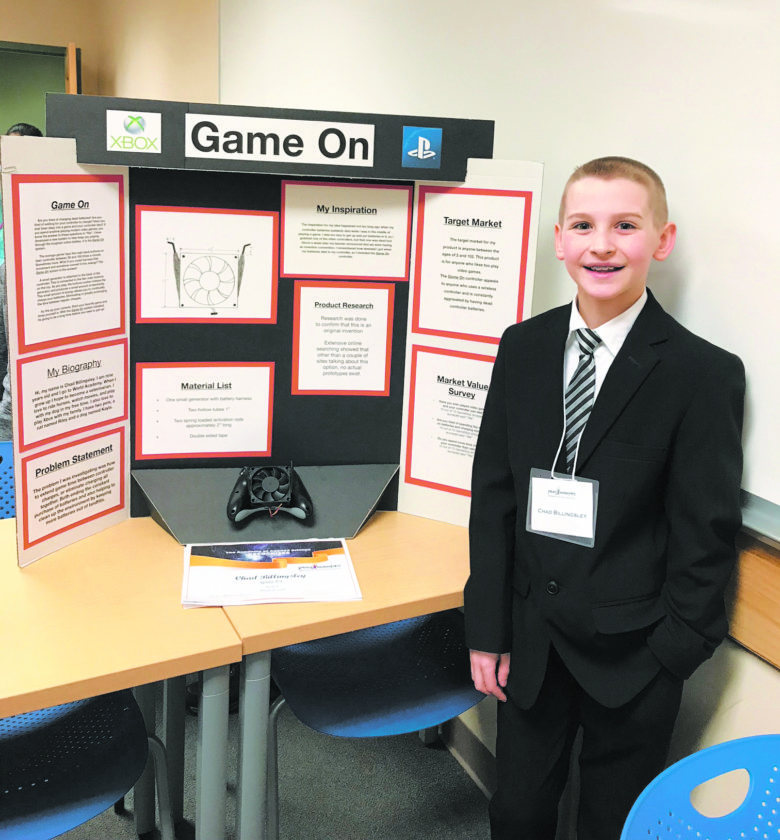 Courtesy photo Chad Billingsley, 10, stands with his invention “Game On,” a video game controller attachment that charges the device wirelessly.

Hollis – The next revolution in video game technology may just come from a local fourth-grader.

Chad Billingsley, a 10-year-old from Hollis, loves video games as much as the next kid. Fortnite, Minecraft, Rocket League, he’s no stranger to unwinding after school with his Xbox.

However, much to his frustration, his controllers kept dying and he was spending more time than he wanted either replacing or recharging the batteries.

Chad scoured the internet and shelves of stores for a self-charging controller, but could not find one.

So he decided to make one himself, giving it the name, “Game On.”

Game On “uses a small generator attached to the back buttons on the controller to continually charge the controller through motion the entire time you are playing,” he said.

As part of the curriculum at World Academy in Nashua, where Chad attends school, fourth-graders have to come up with an idea or invention and present it to the class, his father Brandon Billingsley said.

The idea won him first place at a school competition, and first in “fun and leisure” at the regional level.

To move forward, Chad had to film a video in one take with no editing) explaining the product and then build a prototype.

“Several different ideas were tried. From solar panels to hamster wheels, nothing worked that still allowed the gamer to play wirelessly,” he said in his video. He realized through his research that the average gamer touches the back buttons on the controller 30 to 100 times per minute. He wanted to use that movement to power the controller.

In the video, he said they received positive feedback from those in the industry.

Apparently, the appreciation for the idea extended to judges, as Chad won the Staff’s Choice Award at the National Invention Convention and Entrepreneurship Expo in Michigan, overcoming 400 other student inventors. The award was presented by the STEMIE Coalition, a nonprofit formed to elevate invention and entrepreneurship for students in the areas of science, technology, engineering and math.

Having won, Chad will receive engineering consultation and patent help to hopefully move Game On forward. He’s already trying to think of ways to make the device lighter, as the weight is the only criticism he heard.

At just 10, Chad is enjoying the creativity in inventing.

“You can do what you want with it because you’re making own idea,” he said.

His parents, Brandon and Lee-Ann Billingsley are very proud.

“I think it’s a great opportunity for him and for all the other kids,” his father said. “Why all schools don’t do it, I don’t know,” he said of the invention component in World Academy’s fourth grade curriculum.

“It gets them thinking of different ways they can (create),” he added.

“Chad’s invention was selected because of its insight of the lost energy inherent in the hundreds of millions of gaming controllers which dot the planet, and how he envisioned a way towards a more sustainable and self-powered controller,” STEMIE Coalition CEO Danny Briere added.