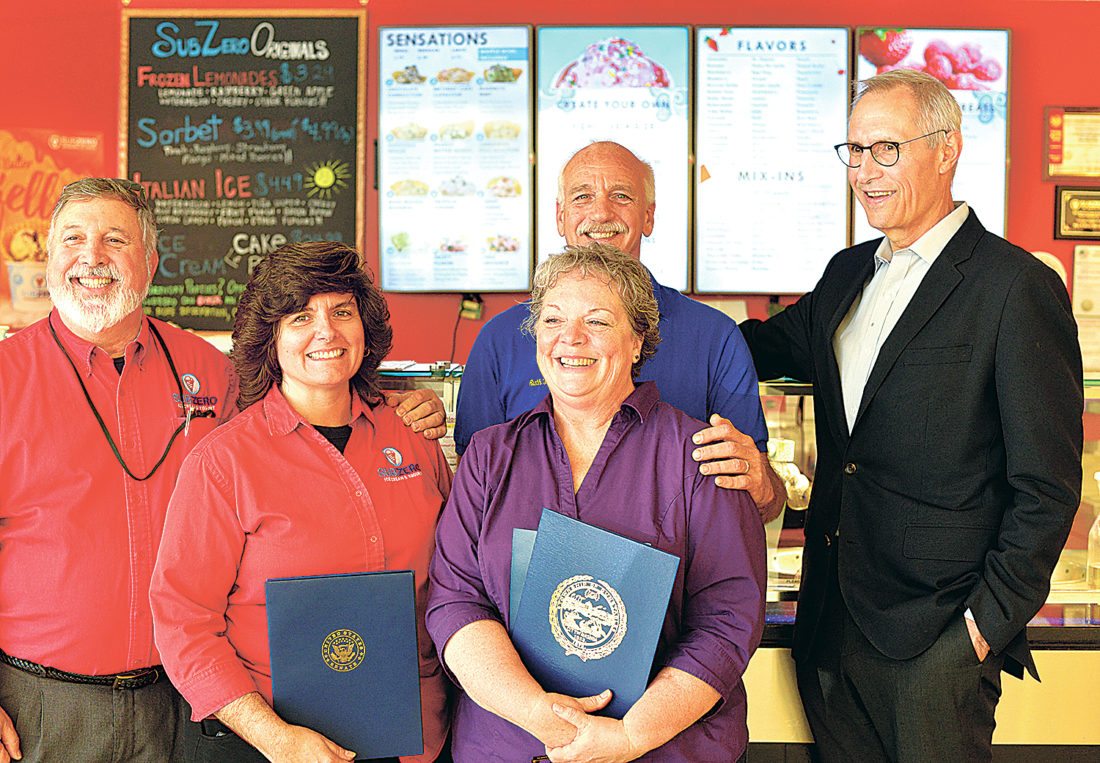 Adam Urquhart Mark and Rita McCabe, owners of Sub Zero Ice Cream and Yogurt, Laurel and Ed Smith, owners of Ruth’s Mustard and Mayor Jim Donchess pose for a group photo at the end of the celebration.

NASHUA – Mustard and ice cream don’t typically pair together, but when you put both of the 2018 SCORE New Hampshire Small Business Champions in the same room, unique flavors emerge.

Laurel Smith, owner of Ruth’s Mustard said, “Meeting Sub Zero was a blessing. We said, ‘lets try mixing ice cream and mustard’ and they were up for it.”

That’s what they did, mixing chocolate ice cream and raspberry mustard together for people to sample at the celebration.

Now that both businesses have been selected as the two SCORE New Hampshire Small Business Champions, they’re in the running to win the national 2018 SCORE award, where three winners of the national awards will receive $15,000 courtesy of Sam’s Club. Also, both businesses joined 100 other small businesses from around the country in Reno, Nevada, from April 23-26, where they attended a championship training and networking celebration. 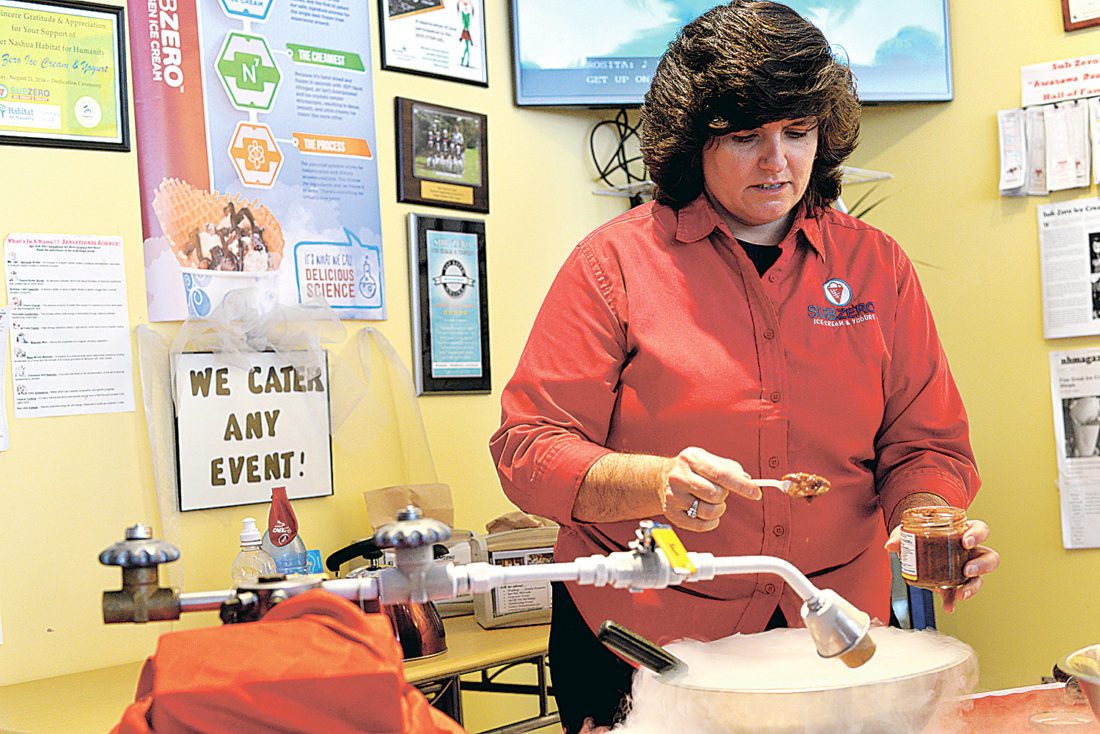 Ed Smith, owner of Ruth’s Mustard said, “Nevada was amazing. It was 12-hour days, and the presenters were amazing, with the top business people in the country. It was warm, friendly and informative.”

Laurel Smith said their trip out to Nevada was more than she expected.

“I learned that there’s amazing people all over the country doing wonderful things. It’s a fine country full of entrepreneurs giving back,” Ed said.

Ruth’s Mustard offers a variety of flavors, but also pledges to give 10 percent of its profits to “feed the need of others.” Over the five years they’ve been in business, they’ve donated to local homeless shelters, organizations that help sick children and many others.

Like Ruth’s Mustard, Sub Zero also gives back to the community by dedicating much of its time visiting local schools and youth groups to demonstrate and promote the STEM technology and science that goes into producing their ice cream at negative 321 degrees Fahrenheit.

Mark and Rita McCabe own the Sub Zero Ice Cream and Yogurt franchise in Nashua, and Rita said they’re happy to be recognized, and that a lot of people don’t realize what they do.

“We’re way more than an ice cream shop. We’re constantly out in the community giving back, and the STEM piece is a big part of the company,” Rita said.

Aside from teaching the youth about the STEM enrichment piece, they offer a plethora of flavors and combinations for patrons, even accommodating those with food allergies.

“We can accommodate lactose and nut allergies here. People can get anything they want, and you won’t find flavor combinations like this anywhere else,” Rita said.

SCORE is a resource partner of the U.S. Small Business Administration, and is the nation’s largest network of volunteer expert business mentors. They partner with Sam’s Club to offer the SCORE award.

Donchess read proclamations on behalf of both businesses, and representatives from Sen. Maggie Hassan’s office and U.S. Rep. Annie Kuster’s office read letters on their behalves.