Man gets 6 months in prison for stealing from elderly woman 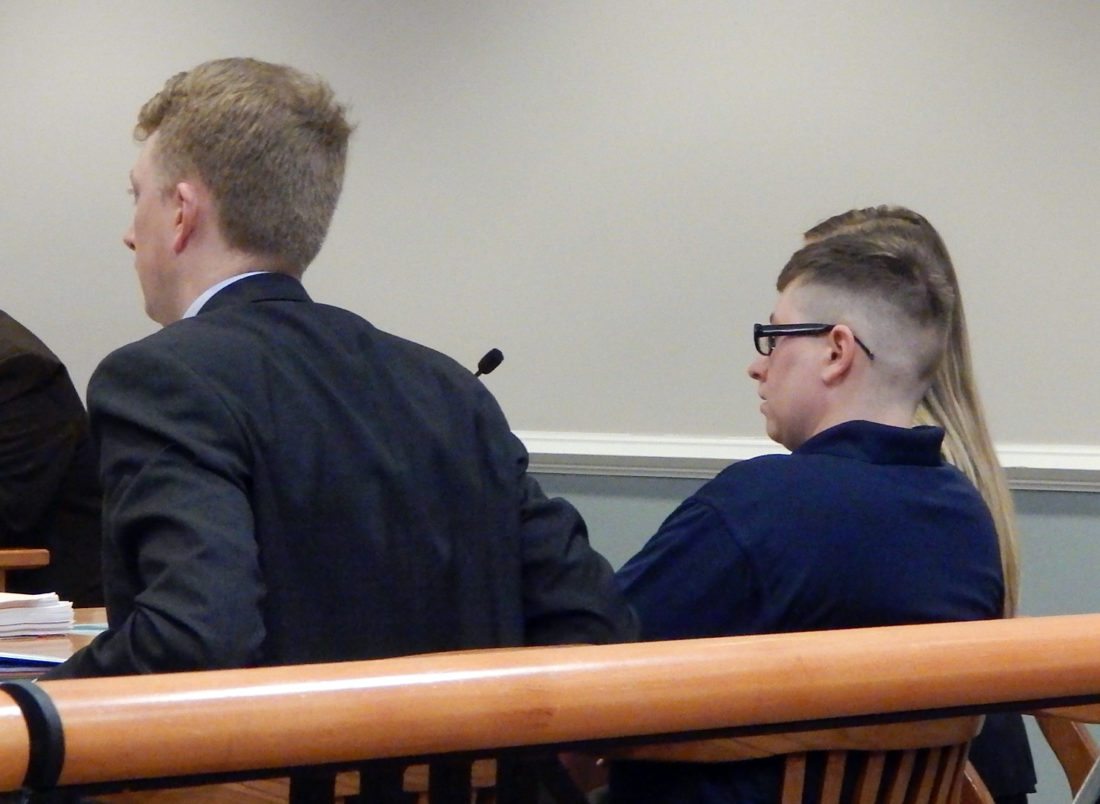 Staff photo by Dean Shalhoup Ashton Haven, right, listens to Judge Charles Temple's sentencing orders after Haven, 29, pleaded guilty in court Monday to three charges accusing him of financially exploiting an elderly family member. He was represented by Attorneys Jeff Odlund, left, and Amanda Henderson, who is behind Haven.

NASHUA – When he met a divorced woman with five children through an online gaming site a couple years ago, longtime Nashua resident Ashton Haven believed the “complete family life” he’d so longed for was finally within reach.

Attorney Jeff Odlund, one of Haven’s two lawyers, told Superior Court Judge Charles Temple that his client’s case is one in which “Ashton was placed in a situation where he wanted what he saw as having a family.”

“While it is not an excuse for the choices he made, I think it explains how the case happened … it contexualizes it,” Oldlund said, referring to the series of felony charges leveled 13 months ago against Haven, accusing him of financially exploiting an elderly relative by stealing thousands of dollars from her accounts.

Haven, 29, of 120 Monroe St., appeared before Temple in Hillsborough County Superior Court South Monday afternoon to plead guilty to three of the seven charges he’d faced in connection with the theft of more than $27,000 from the elderly woman, for whom Haven had durable power of attorney.

He ultimately sentenced Haven to 1-3 years in state prison, with 90 days of the minimum suspended for three years after his release.

Coupled with the agreement that Haven be given credit for the 96 days he’s already spent in jail, brings his total minimum stand committed time to just under six months, a resolution that Temple said he believes reconciles “a number of aggravating and mitigating factors in this case.”

Those four charges were dropped by prosecutors as part of the

The attorneys had come to a capped plea agreement in the case, meaning that each side presented a sentencing recommendation to the judge. Odlund asked for a sentence of 1-2 years in state prison, all deferred for one year and then suspended for two years, while Gerod recommended that Temple sentence Haven to 1-3 years in state prison.

On the other charges Haven agreed to plead guilty to Monday – two counts of theft by deception – both sides recommended a term of 2-4 years in state prison, all suspended for three years.

Both also agreed that Haven be credited with the 96 days of time already served, and that he be allowed to report to state prison on April 6, to allow him to give two weeks notice to his present employer, a local coffee shop.

The terms of the agreement also order Haven to pay $27,600 in restitution to the victim. He must also enroll in any educational, treatment or counseling programs recommended by prison officials, and obtain “further rehabilitation,” Temple said, “so you can finally address the demons that have haunted you for the better part of your life.”

The judge referred to Odlund’s account of his client’s childhood, in which he said Haven was “a victim of serious violence” that led to a diagnosis of PTSD in

Haven grew up in the area, Odlund said, and had no criminal history until this case. “My client is also transgender, and was on hormone therapy … but that stopped when he went to Valley Street Jail” after his arrest.

Losing his father to a heart attack at a young age, Haven was “suddenly thrust into the position of caring for” the elderly relative, Odlund said.

“The responsibility fell to him … frankly, being called upon to be her power of attorney was beyond his capabilities, but he was the only adult in the home,” he said.

Once Haven met the woman with five children, he began using “the misappropriated funds” for “frivolous, unreasonable” purchases of goods and services, Odlund said.

Gerod, the prosecutor, said “a substantial amount of money was spent on restaurants, mainly fast-food places for the woman’s

Meanwhile, Gerod said, the victim, who had been diagnosed with dementia five years earlier, trusted Haven, but otherwise “she simply did not have the cognitive abilities to realize what was happening.” She therefore trusted that Haven “was doing everything in her best interest,” he said.

The woman “is really the most vulnerable victim you can have,” Gerod continued. “She had no ability to realize what was happening … unable to consent to anything.”

He also noted the “horrible condition” that authorities found the house in when they began investigating the case, and that Haven neglected paying utility bills so long that services were eventually shut off.

Odlund said that the fact Haven was “comfortable living in conditions like that” shows that he “has deep psychological issues” that need to be addressed.

Haven alternated between stoic and emotional as he watched the proceedings from the defense table.

Asked if he wanted to address the court, Haven spoke briefly with his attorneys then rose from his seat.

“I just want to say I’m truly sorry,” he began, his voice breaking. “I understand now, that at the time, I didn’t see what was going on … now I see it,” he said between pauses.

Dean Shalhoup can be reached at 594-1256, dshalhoup@nashuatelegraph.com.