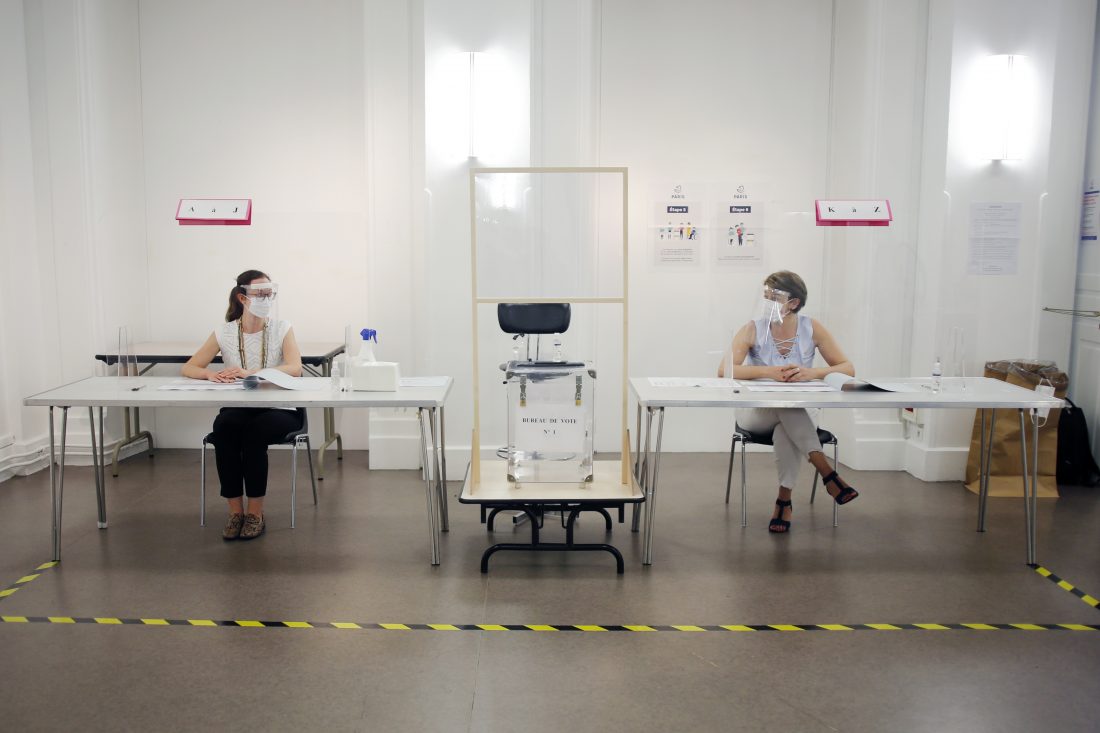 People wearing face mask and visor to protect against coronavirus sit behind a glass shield during a rehearsal of the vote for the local elections scheduled for Sunday, June 28, in Paris, Friday, June 26, 2020. France is to hold its Covid-19 delayed second round of local elections on June 28. (AP Photo/Thibault Camus)

PARIS (AP) — France is holding the second round of municipal elections in 5,000 towns and cities Sunday that got postponed due to the country’s coronavirus outbreak.

The voting to fill local offices in Paris and thousands of other places was suspended after the first round of the nationwide municipal elections on March 15, which produced decisive outcomes in some 30,000 other mostly small communes.

Voters are set to choose mayors and municipal councilors on Sunday at polling stations operating under strict hygiene rules. Face masks, soap or hand sanitizers and maintaining 1 meter (about 3 feet) between each person in lines are mandatory. Voters have been told to bring their own pens to sign the register.

The spread of the coronavirus has slowed significantly in France in recent weeks and almost all restrictions on social and business activity were gradually lifted over the last month. France has reported nearly 200,000 confirmed cases and 29,781 deaths in the pandemic.

But the virus is still expected to hurt Sunday’s turnout, as it did in March. Only 44.7% of voters, a record low, cast ballots in the first round of the municipal elections.

The elections, though ostensibly focused on local concerns, are also seen as a key political indicator ahead of the 2022 French presidential election.

The main battleground is Paris, where the mayor is an influential figure in French politics and will oversee the 2024 Olympics. Paris Mayor Annie Hidalgo, a Socialist Party member, finished in March with a strong lead ahead of conservative candidate Rachida Dati.

French President Emmanuel Macron’s 3-year-old centrist party is fielding municipal candidates for the first time and still lacks local roots across France. The party, Republic on the Move, doesn’t have candidates in every race and in some instances is backing candidates from both the left and the right instead.

Macron’s government has faced criticism during the pandemic over mask shortages, testing capacity and a lack of medical equipment. A government reshuffle is expected in the wake of Sunday’s elections.

Recent opinion polls show Macron’s popularity rating is hovering around 40%, which is higher than from before the virus outbreak.

French Prime Minister Edouard Philippe, whose popularity has significantly increased in recent weeks, is running for mayor in his hometown of Le Havre.

The conservative Republicans party, which was the big winner in the 2014 municipal election, is expected to do well again based on its strong network of elected officials.

On the left, the Europe Ecology-The Greens party looks to significantly increase its influence by surpassing a traditional ally, the weakened Socialist Party.

Europe Ecology-The Greens and leftist allies appear to be in a position to win the mayoral races in several big cities, including Marseille, Lyon and Toulouse. The party is backing Hidalgo’s reelection in Paris.

The anti-immigration, far-right National Rally is focusing on consolidating its 2014 results, when candidates backed by the party won in 12 towns.