Isolate on arrival: NYC region is latest to try quarantine 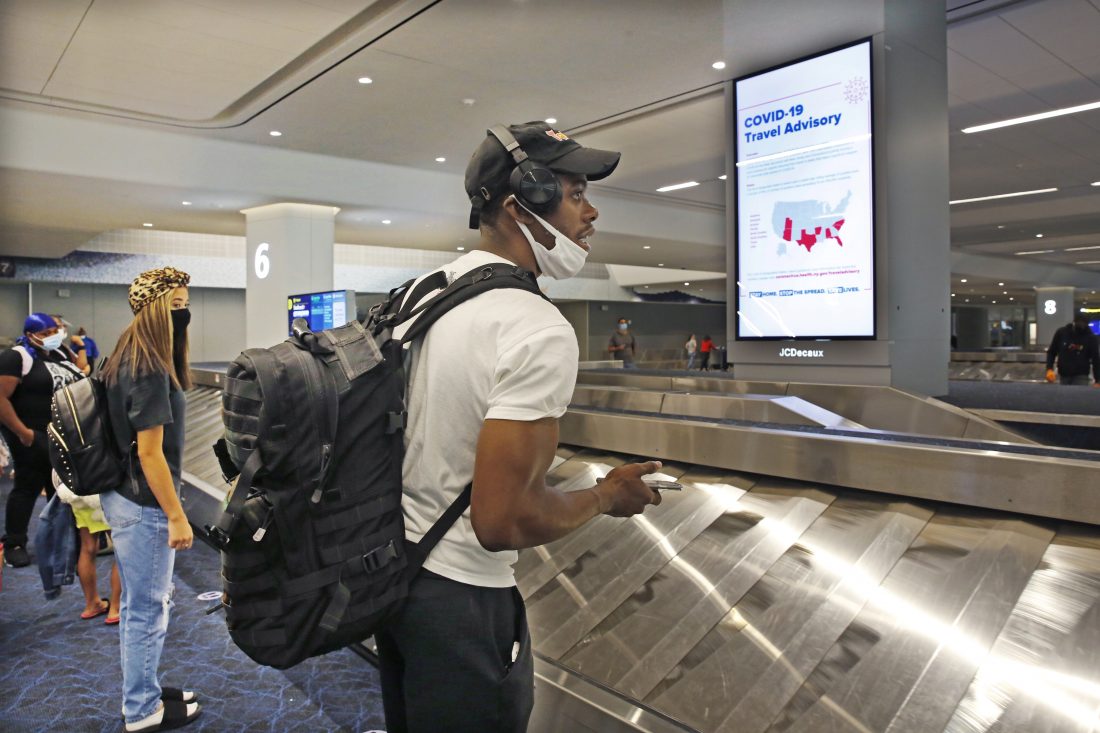 Welcome to New York! Now don’t come near us for two weeks.

New York, New Jersey and Connecticut are the latest states to enact 14-day traveler quarantines to try to check the spread of the coronavirus. After being slammed by the outbreak this spring, the states’ governors hope they can preserve their hard-won recovery by making travelers from more than a half-dozen hot-spot states isolate themselves.

There were few details Friday on how the newly enacted quarantine will be enforced, but playbooks from other states include everything from making new arrivals fill out forms to having National Guard members knock on doors.

And while it’s impossible to keep an eye out on every hotel, every highway, every airport and every bus terminal, the policies could have an immediate effect if they discourage people from coming in the first place.

“Right now, I think you’re going to find that a lot of people who maybe were thinking about flying to Connecticut from Miami Beach or Dallas-Fort Worth are going to take a pause,” Connecticut Gov. Ned Lamont said. “I think most of them will be staying at home. That’s what I want to have happen.”

The three states have previous experience with travel quarantines — though as targets instead of enforcers. In March, as caseloads climbed ominously in the New York City area, Florida and Texas separately issued orders requiring people flying in from the New York tri-state area to quarantine for 14 days.

In Florida, travelers from the three states arriving on commercial flights or via Interstate-95 fill out a form that includes their phone number and address where they will be staying. The Florida Highway Patrol makes sure quarantines are being followed, including through in-person visits, according to a state spokesperson.

Officials in Rhode Island took more aggressive steps that same month, deploying National Guard troops door to door in coastal areas to inform any New Yorkers who may have come to the state that they must self-quarantine for 14 days. Democratic Gov. Gina Raimondo also had state police stopping vehicles with New York license plates and giving the occupants copies of her quarantine demand.

The door knocks and vehicle stops were halted within weeks and Rhode Island eventually extended the mandatory quarantine to visitors from every other state except those from bordering Massachusetts and Connecticut who were merely commuting to and from work.

Did Rhode Island’s hard line work? Raimondo said it did as part of a broader effort including testing and mask mandates.

“I think it’s a good idea,” she said this week.

Centers for Disease Control and Prevention Director Dr. Robert Redfield was less sure about state-to-state quarantines.

“We don’t have any evidence-based data to support the public health value of that decision,” he said when asked Thursday about the move by Northeast states.

Alaska and Hawaii both implemented a 14-day quarantine for people arriving in those states. Hawaii has been especially aggressive in enforcing the ban and has arrested violators.

When travelers land in Hawaii, airport officials verify their arrangements by contacting hotels. Tourism officials follow up to verify travelers are in quarantine. Authorities rely on tips from hotel workers and other residents to catch quarantine breakers. There’s even a 4,000-member Facebook group dedicated to making sure visitors adhere to the rules.

Alaska this month gave travelers the option of testing to avoid the mandatory quarantine. Hawaii on Wednesday announced it was adopting a similar plan to Alaska’s which would take effect in August.

“We are talking to the airlines right now about our ability as a state to question people … coming into, our airports, gathering information from them, doing checks … on them, temperature checks etc.,” Cuomo told reporters Friday.

Cuomo on CNN on Thursday mentioned random checks to make sure people are quarantining.

The operators of the three major New York City region airports — which had more than 300 flights arriving from Florida airports over the week ending Wednesday — have already put up “COVID-19 Travel Advisory” signs with targeted states outlined in red. Signs also were being posted at the Port Authority Bus Terminal in Manhattan.

City hotels will ask if incoming guests have traveled from states on the quarantine list, said Lisa Linden, a spokesperson for the Hotel Association of New York City. Airbnb was notifying its hosts in the three states about the quarantine as it took steps to make sure potential guests were informed, said spokesman Sam Randall.

In Connecticut, portable electronic signs were placed along major interstates near the borders.

In New Jersey, electronic signs will be asking travelers arriving from out of state to call 511 to determine their quarantine status, according to Transportation Department spokesperson Stephen Schapiro.

The operators of Bradley International Airport in Windsor Locks, Connecticut, said they are working with carriers to make clear they expect on-board announcements about the quarantine on arriving flights. Messages are also posted throughout the terminal building, said Kevin Dillon, executive director of the Connecticut Airport Authority.

Dillon noted that flights to places like Florida, North Carolina and Texas are being affected.

“There no doubt it will have an impact at Bradley airport,” he said.