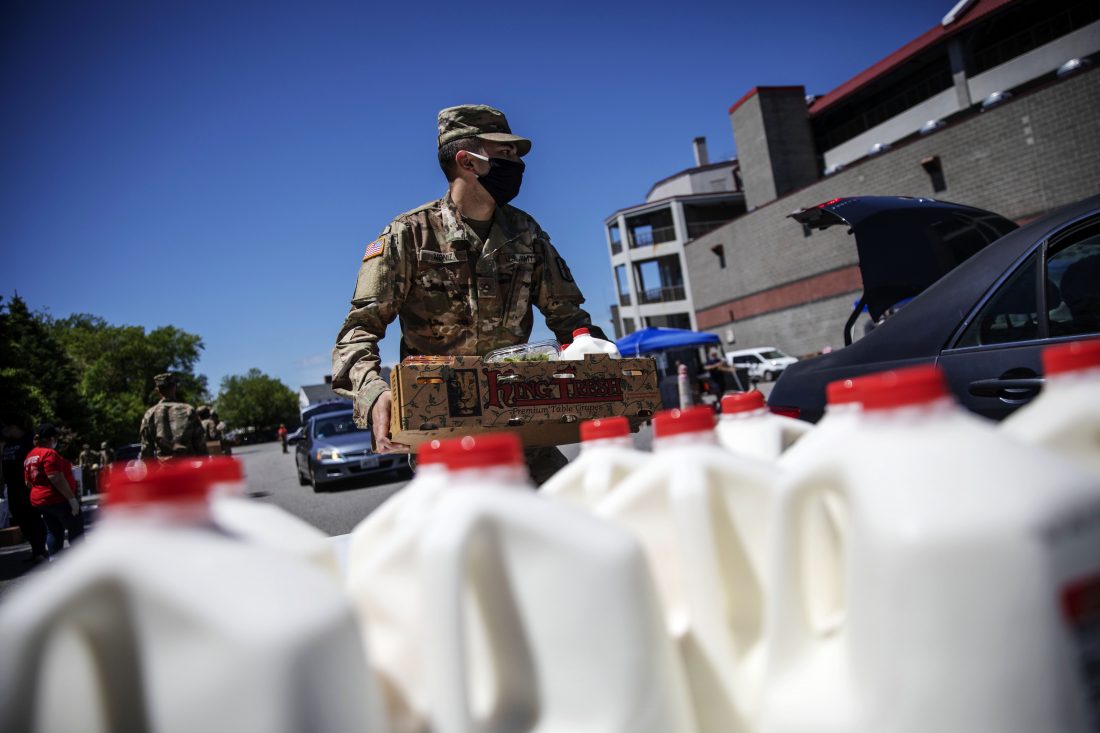 Rhode Island National Guard Pfc. Gerald Moniz distributes gallons of milk and produce along with volunteers with the Dairy Farmers of America to families in need, Wednesday, May 27, 2020, in Pawtucket, R.I. Dairy farmers have a milk surplus because demand has dropped as schools and restaurants closed during the coronavirus pandemic, and some farmers have had to pour excess milk away. Farmers donated the 4,300 gallons of milk given away today at McCoy Stadium. (AP Photo/David Goldman)

Youth sports programs will be allowed to resume in Rhode Island starting Monday, though there won’t be any league play, tournaments or other organized competitions for now, Gov. Gina Raimondo said Thursday.

The Democrat said the focus is on resuming practices and scrimmages under new guidelines to limit transmission of COVID-19. That means children, adults and coaches will have to wear face masks, and play would be limited to stable groups of 15 children or fewer.

Official competitions could follow in July if coronavirus cases continue to wane in the state, Raimondo added. Adult recreational sports will also be allowed to resume under the same rules, she said.

The governor announced earlier this month that summer youth camps can open at the end of June.

Other virus developments in Rhode Island:

As in other states, stylists and customers alike will have to wear masks, reservations will be required and capacity will be limited.

The storefronts are among a wide range of businesses, including gyms and fitness studios, slated to reopen Monday as part of the second phase of the state’s reopening plan.

Restaurants, which are currently allowed to offer outdoor dining, takeout or delivery, will also be allowed to serve customers indoors, though only at about 50% capacity.

But judges will only consider cases initiated before March 17, she said. Any cases after that date won’t be considered at least until July 1, giving those facing eviction because of the virus some reprieve.

The governor also announced another $5 million has been added to the state’s $1.5 million emergency rental assistance fund to help renters at risk of becoming homeless in the pandemic.

Media and government watchdog groups are calling on Raimondo to rescind her executive order giving public agencies more time to respond to records requests during the pandemic.

The Rhode Island Press Association and the state chapters of the American Civil Liberties Union, the League of Women Voters and Common Cause are among the signatories.

Raimondo’s office says it “believes in the public’s right to accurate and timely information” and is currently reviewing the executive order, which expires June 14 but has been extended twice before.

The American Civil Liberties Union of Rhode Island has sued the state Department of Labor and Training for freezing unemployment insurance benefit payments to hundreds of Rhode Islanders.

Angelika Pelligrino, a department spokeswoman, said the agency is handling an unprecedented volume of claims because of the pandemic and has temporarily paused payments on suspected fraudulent accounts “out of an abundance of caution.”

The PawSox are turning McCoy Stadium into a giant outdoor restaurant starting June 5.

The Red Sox minor league team said the Pawtucket stadium will serve hot dogs and other ballpark favorites for patrons who want to dine on the infield diamond. Reservations will be required and curbside pickup will also be available.

The team, which would have marked 50 years of play in Pawtucket this year, is slated to move to Worcester, Massachusetts, in 2021, where it will be rechristened the WooSox.

CVS Health is opening 10 new drive-thru coronavirus testing sites at pharmacies in Rhode Island on Friday as part of its commitment to open 1,000 such sites nationwide.

The new sites will utilize self-swab tests that won’t require people to get out of their vehicles, according to the Woonsocket-based company. No testing will be done in the stores.

Patients must make an appointment online, and a qualified CVS employee will observe the test, which will then be sent to a third-party lab. Test results are expected back in about three days.

There have now been nearly 680 deaths from the pandemic and nearly 14,500 positive cases in the state. More than 500 of the deaths have occurred in nursing homes, state officials said.