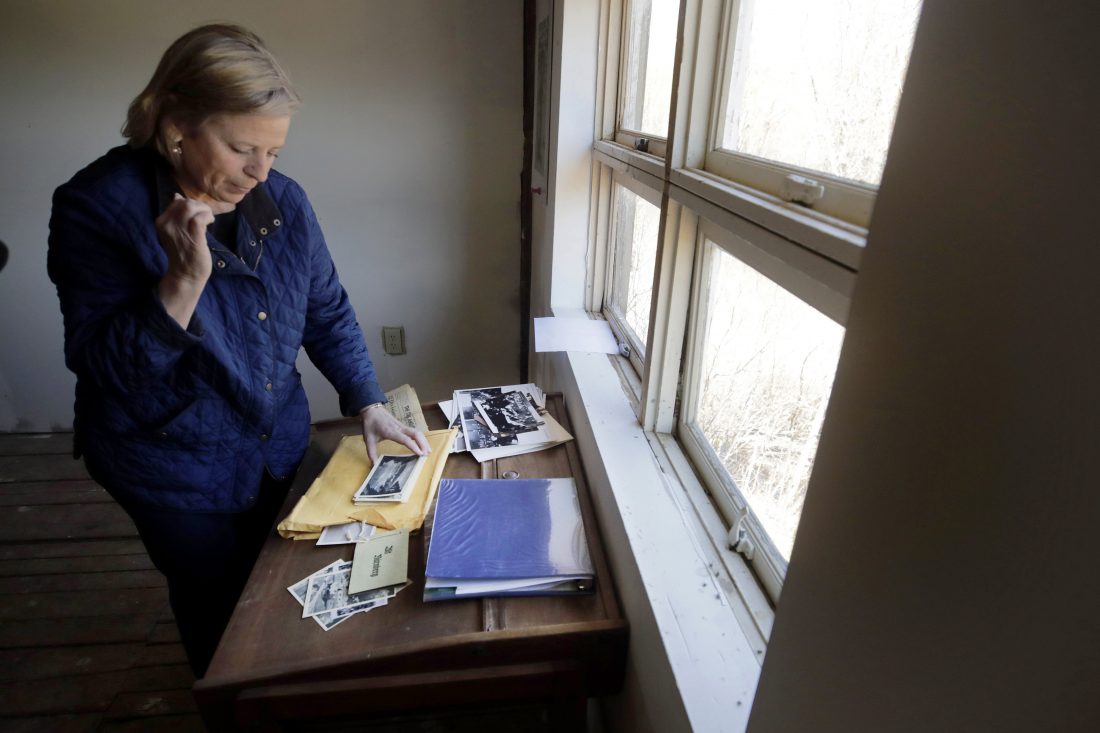 Emily DiPalma Aho looks over photographs and memorabilia of her father, Emilio DiPalma, a World War II veteran, at her home in Jaffrey, N.H., Wednesday, May 13, 2020. Emilio DiPalma, who as a 19-year-old U.S. Army infantryman stood guard at the Nuremberg Nazi war crimes trials, died last month at the age of 93 after contracting the coronavirus at Holyoke Soldiers' Home in Massachusetts. (AP Photo/Charles Krupa)

Emilio DiPalma was, as he liked to say, just a kid from western Massachusetts when he found himself in a front-row seat to history as a courtroom guard in Nuremberg, Germany, during the first and most famous trial of Nazi war criminals in 1945.

The 19-year-old had fought Germans on the front lines in World War II, lost friends in battle and witnessed horrors that would forever change his view of the world. Then he found himself standing guard over Adolf Hitler’s top officers as they were brought to justice for atrocities committed by the Third Reich.

“To this day, I can hardly believe that any human being could do such cruel things to another,” DiPalma wrote in the memoir he published with the help of his daughter decades later.

DiPalma died on April 8 at the age of 93 after contracting the coronavirus at the Holyoke Soldiers’ Home in Massachusetts, where he was being cared for because of dementia. More than 70 other veterans sickened with the virus at the Soldiers Home have died, making it one of the deadliest known outbreaks at a long-term care facility in the U.S.

EDITOR’S NOTE: This is part of an ongoing series of stories remembering people who have died from coronavirus around the world.

The son of Italian immigrants, DiPalma grew up in Springfield, Massachusetts, before being drafted into the Army in 1944 at the age of 18. He left home a “happy go-lucky” kid who was gung-ho for battle, he said, but the gravity of the war quickly crashed down on him.

“It doesn’t take long that you realize this is not John Wayne movies, this is serious. And you grow up an awful lot while you’re up there,” DiPalma said in a video interview with the New York State Military Museum.

As a member of the 79th Infantry Division, DiPalma watched friends die and had close calls himself.

Once, he was climbing up an embankment when a fellow soldier stepped in front of him and “took a hit at that very same moment, a hit that was surely meant” for DiPalma, he wrote. Another time, medics were carrying a soldier on a stretcher, when DiPalma realized the injured man was his friend. “Death took him away as I looked back at him,” he recalled.

After the Allies defeated Germany, DiPalma was sent to Nuremberg, where he was first tasked with making copies of documents detailing Nazi war crimes. Soon, he became a guard at the Nazi’s prison cells. Eventually, he was asked to serve a guard in the courtroom, where he stood at the witness box with his arms clasped behind his back while Hitler’s deputies were grilled over their atrocities.

DiPalma found himself face to face with Nazi leaders, including the head of the German Air Force, Hermann Goering. While court was in recess, Goering would often ask DiPalma for a drink of water, so DiPalma would go get him a cup from the water bag down the hall. Goering would turn his nose up and say “Bah, Americanish,” and give it back, DiPalma recalled.

“I guess I felt it was my little contribution to the war effort,” DiPalma wrote.

DiPalma left Nuremberg in July 1946 and was discharged. Three months later, Goering killed himself hours before he was set to be hanged for his war crimes.

After the war, DiPalma met his future wife, Louise Catelotti, while on a double date. They were supposed to be dating other people but immediately hit it off, his daughter, Emily Aho, said. They raised four girls in East Longmeadow, Massachusetts, and DiPalma “had his hands full” during their teenage years, Aho said while laughing. Louise DiPalma died of ALS – Lou Gehrig’s disease – in 2006.

DiPalma worked as a crane operator and a volunteer firefighter for their small town and enjoyed hunting, gardening, fishing and spending time at their beach house in Connecticut during the summer. He rarely talked about his days in the war, Aho said, but his wartime experiences left a lasting impact on how he saw others.

“It made me a little bit leery of everybody … When I came back, I never trusted anybody,” he said in the military museum interview. “And I think that has made me a better person. It tells you what the real world is, rather than a bowl of cherries,” he said.

Aho convinced her father to come with her to Germany in 2000 while she was doing research for a book she was writing. At the Palace of Justice, he excitedly showed her around and was “like a kid again,” Aho recalled. They sat down in the courtroom and footage from the trials began playing showing a young DiPalma standing guard over Goering in the witness box.

“I just sat there and cried,” his daughter said.

After they returned home, she bought him a tape recorder for his 75th birthday and used those recordings to help him craft his memoir, titled “Just a Kid: A Guard at the Nuremberg Trials.”

DiPalma sometimes struggled to talk about some things he saw, but he believed it was important for it not to be forgotten, Aho said.

“He wanted to share his story so that this wouldn’t happen again,” she said.