Purgatory Falls on Lyndeborough-Mont Vernon line is steeped in history

Purgatory Upper Falls on the Lyndeborough-Mont Vernon line is a natural wonder.

Black Brook cascades through a steep flume and then falls another 20 feet into a wide basin. The total drop, according to the Mont Vernon history of 1907, is 50 feet. The flume is about 40 feet long and 12 feet wide, with an average depth of 18 feet.

Two glacial potholes are at the top of the falls. The larger, which is nearly round and about 10 feet deep, is called “The Devil’s Bean Pot.” Beside it is the imprint of a human foot, a few inches deep and 7 feet long, “The Devil’s Footprint.” Tucked into an overhand at the bottom is a pretty good rock profile, if viewed from the right spot, “The Old Boy’s Face.”

Apparently no one knows where it got its name, but Fritz Wetherbee has some grand stories.

The area was once considered briefly for a state park, but officials decided Otter Lake in Greenfield would accommodate more people and activities, and the falls were left as they were.

The area, conserved by Lyndeborough and Mont Vernon, is a natural area with wonderful trees, rock outcroppings, steep cliffs, mosses and ferns. Somewhere in the area, there used to be a patch of yellow violets, although I haven’t seen it in years. The cliffs on the west side of the bowl are 60 to 70 feet straight up – or down, if that’s where you are.

The ravine is a rock hound’s delight, with tiny garnets in the streambed and black tourmaline in the cliffs.

It was once a picnic area with a bandstand, dancing platform, bowling alley and “other facilities,” according to the history. The area was developed by the owner, H.A. Hutchinson, in partnership with Henry
Dodge and Joseph Carleton. It was dedicated in August 1889 with more than 2,000 people attending. It was called Hutchinson’s Grove.

Thereafter, until World War I, one weekend in August was Purgatory Picnic Day, with up to 1,500 people attending. That was the era of the big summer hotels, and the excursion was offered by The Grand in Mont Vernon.

The Hon. Charles J. Smith gave the dedicatory speech, which he called “Purgatory and the Early Settlers.”

My copy of that speech is a fragile little booklet.

There is only one record of someone falling off, Smith said, a George Worcester, who was cutting logs in the area to the west and decided to “take a look at the falls.” He slid in the snow and landed in “several feet of sloshy snow at the bottom.” He had a few bumps and bruises, and survived to serve with the 2nd N.H. Volunteers in the Civil War.

Smith also tells the tale from 1770 of Hodgeman, a young English deserter from the British army. He was befriended by a Mont Vernon resident, Stephen Peabody (whose house was only a cellar hole in 1889), who hid him in the ravine.

Hodgeman later married, settled in Amherst and was afterward known as William Brown. About 80 years later, his grandson, Robert Brown, acquired the nearby farm in Lyndeborough.

In 1824, Ezekiel Upton built a dam above the falls and operated a grist mill for a few years. There are still some faint signs of the road that led to it, but no sign of the dam or mill.

Peabody served at Bunker Hill and also at the Battle of Bennington.

The Upper Falls are best reached by a recently constructed trail from a small parking area at the end of Purgatory Falls Road. Trails lead along the brook, past the Middle Falls to the Lower Falls
off Purgatory Road in Milford, just up from Fitch’s Corner.

It’s a nice hike. Groups tend to leave a car at one end and just walk one way.

I haven’t walked it in several years because of a knee problem. I have promised our rescue people that I won’t be the first person they have to carry out.

Keep up with the past with Another Perspective, which runs every other Sunday in The Telegraph. Jessie Salisbury can be reached at 654-9704 or jessies@tellink.net.

Aviation Museum’s ‘Around the World’ flight to arrive home

LONDONDERRY – After departing Manchester-Boston Regional Airport on May 1, New Hampshire students have traveled ... 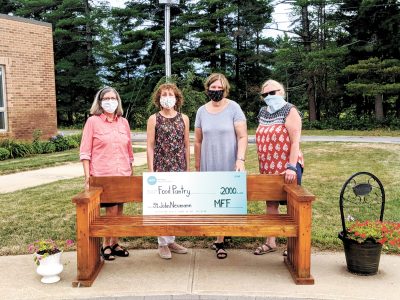