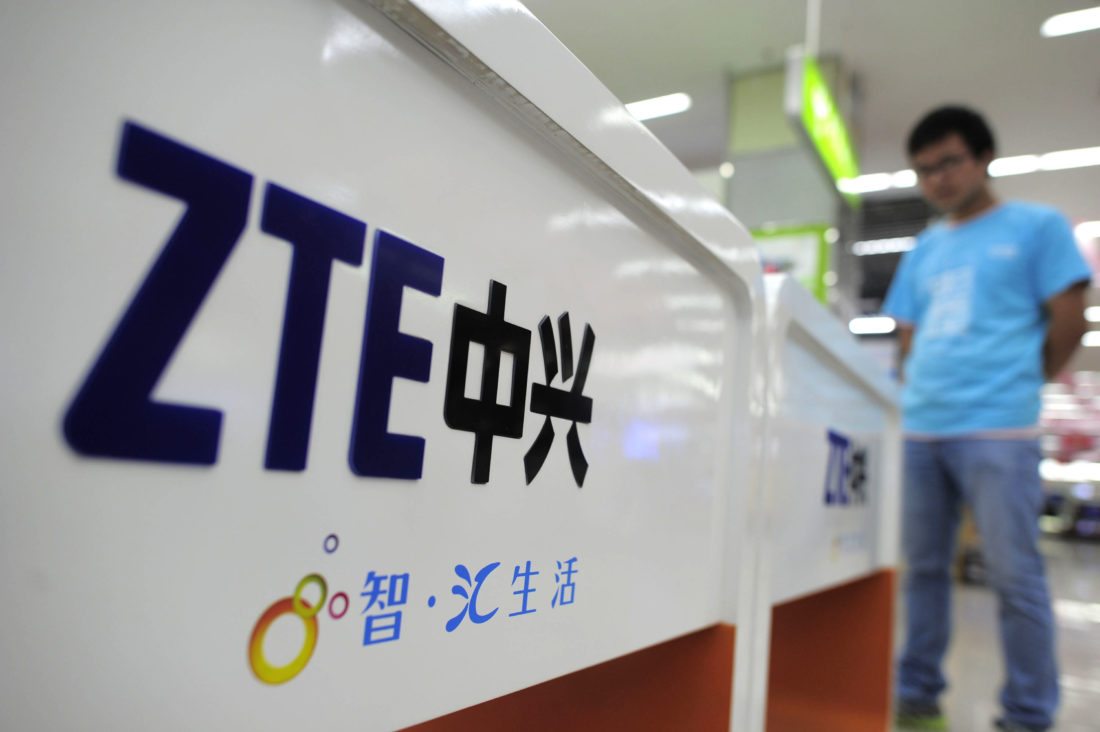 FILE - In this Oct. 8, 2012, file photo, a salesperson stands at counters selling mobile phones produced by ZTE Corp. at an appliance store in Wuhan in central China's Hubei province. President Donald Trump said Sunday, May 13, 2018, that he would help a Chinese telecommunications company get "back into business," saying too many jobs in China are stake after the U.S. government cut off access to its American suppliers. At issue is the Commerce Department’s move last month to block the ZTE Corp., a major supplier of telecoms networks and smartphones based in southern China, from importing American components for seven years. (Chinatopix Via AP, File)

WASHINGTON (AP) – In a surprising overture to China, President Donald Trump said Sunday he would help a Chinese telecommunications company get “back into business,” saying too many jobs in China are at stake after the U.S. government cut off access to its American suppliers.

At issue is the Commerce Department’s move last month to block the ZTE Corp., a major supplier of telecoms networks and smartphones based in southern China, from importing American components for seven years. The U.S. accused ZTE of misleading American regulators after it settled charges of violating sanctions against North Korea and Iran.

The case dates to before Trump took office in January 2007 but the Commerce Department’s decision came amid worsening trade tensions between the U.S. and China centered on technology-related intellectual property.

“A reversal of the ZTE decision could temporarily tamp down trade tensions by allowing the Chinese to make concessions to the U.S. without losing face,” said Eswar Prasad, a professor of trade policy at Cornell University. “Trump may have recognized that backing off on ZTE clears the path for him to claim at least a partial victory in the US-China trade dispute based on the concessions the Chinese seem prepared to offer.”

ZTE, which has more than 70,000 employees and has supplied networks or equipment to some of the world’s biggest telecoms companies, said in early May that it had halted its main operations as a result of the department’s “denial order.”

Trump, who has taken a hard line on trade and technology issues with Beijing, tweeted that he and Chinese leader Xi Jinping “are working together to give massive Chinese phone company, ZTE, a way to get back into business, fast. Too many jobs in China lost. Commerce Department has been instructed to get it done!”

It was not exactly clear what Trump was proposing for ZTE, or whether it would involve rolling back the Commerce Department’s decision. In a later tweet, Trump suggested the U.S. and China were moving forward on the trade negotiations but it was not clear how the ZTE case would fit into the bigger picture.

“I’ve never seen a president step in and reverse an agency decision like this. It’s not clear, of course, if he’s planning to really reverse it or think of a solution in a larger context, but it is something that is just out of the norm,” said Amanda DeBusk, the chair of the international trade department at the New York City-based law firm Hughes Hubbard & Reed.

DeBusk, a former U.S. Commerce Department assistant secretary for export enforcement, said Trump’s announcement indicates “he is looking to accomplish his objectives on trade with China on a much larger level.”

The widening trade dispute between the world’s two biggest economies has taken a toll on both sides. U.S. companies that export to China have seen their goods held up at China’s ports amid tougher inspections. The block on ZTE was a heavy blow for the company but also hurt the U.S. companies it buys from. According to IDC data, ZTE sources more than 40 percent of its components from the U.S., creating a multibillion-dollar revenue stream for suppliers like Qualcomm and Intel.

Chinese officials raised their objections to ZTE’s punishment at trade talk in Beijing earlier this month, and the American delegation agreed to report them to Trump. ZTE has asked the department to suspend the seven-year ban on doing business with U.S. technology exporters. By cutting off access to U.S. suppliers of essential components such as microchips, the ban threatens ZTE’s existence, the company has said.

At the Beijing talks, the Trump administration handed China a list of hard-line demands that trade experts said could make it even more difficult to resolve the trade disputes. Both sides had been expected to dig in for a fight over their trade imbalance at this week’s talks.

But Trump set a more reassuring tone in a separate tweet Sunday, saying the two economic giants were “working well together on trade, but past negotiations have been so one sided in favor of China, for so many years, that it is hard for them to make a deal that benefits both countries. But be cool, it will all work out!”

Trump is seeking to cut the chronic U.S. trade deficit by $100 billion and gain concessions over the policies that foreign companies say force them to share technology in order to gain market access.

The U.S. imposed the penalty on Shenzhen-based ZTE after discovering that the company, which had paid a $1.2 billion fine in the case, had failed to discipline employees involved and paid them bonuses instead.

California Rep. Adam Schiff, the top Democrat on the intelligence committee, criticized Trump for softening his stance on ZTE.

“Our intelligence agencies have warned that ZTE technology and phones pose a major cyber security threat. You should care more about our national security than Chinese jobs,” Schiff said in a tweet directed at Trump.