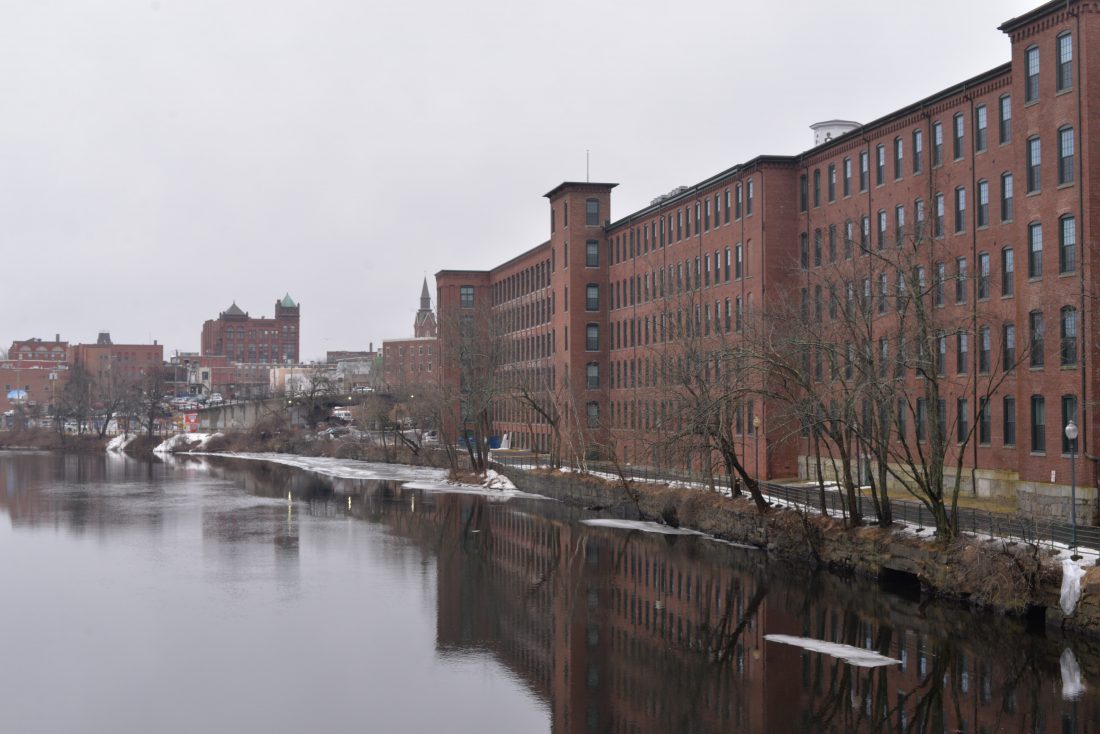 Telegraph photo by ADAM URQUHART With the Clocktower Place apartment structure at right, the Nashua River runs through the heart of the Gate City. Members of Congress representing both New Hampshire and Massachusetts this week introduced legislation to designate portions of the Nashua, Squannacook and Nissitissit rivers as part of the National Wild and Scenic Rivers System.

NASHUA -Water in the Nashua River often ran a rusty red in the 1960s because of intense pollution, as it was one of the nation’s most contaminated waterways.

Those who were around to witness the water conditions may remember seeing a different color flowing down the river each day, depending on what sort of pollution was most recently discharged.

The river winds through southern New Hampshire and northern Massachusetts. In recognizing how far this restoration effort has come, members of Congress from both states introduced legislation this week to designate portions of the Nashua, Squannacook and Nissitissit as part of the National Wild and Scenic Rivers System.

Under this legislation, a locally appointed advisory committee would be created to work with state and federal agencies to protect values intrinsic to the river and direct the rivers to be managed in accordance with the Nashua, Squannacook and Nissitissit Rivers Stewardship Plan, while preserving existing uses. This legislation was introduced by Sens. Edward Markey and Elizabeth Warren, along with U.S. Rep. Lori Trahan of Massachusetts, as welll as Sens. Jeanne Shaheen and Maggie Hassan, along with U.S. Rep. Annie Kuster.

“It has taken decades of work, but the Nashua River has gone from one of the country’s most polluted rivers to a distinguished model for river restoration,” Markey said.

He said this legislation safeguards the watershed so generations to come can continue to canoe and fish in its waters, or hike along its trails. As it is, the Nashua River Watershed encompasses 538 square miles of land in northern Massachusetts and southern New Hampshire. All or portions of 32 communities sit within the geographic bounds of the watershed, serving as a home to roughly 250,000 people living in both urban areas and rural communities.

“While great strides have been made over the years to remove pollution and conserve swaths of the region, there is still much work to be done,” Trahan said.

In the 1960s, it was legal to discard untreated sewage and industrial waste directly into rivers in the U.S. Howewer, when Marion Stoddart moved to the Greater Nashua area with her family in 1962, she made it a mission to restore the river by mobilizing industry leaders, government officials and a collection of concerned residents. She was actually the one who founded the Nashua River Watershed Association (NRWA) in 1969. She also worked tirelessly to push for state and federal legislation.

“Thanks to the work of dedicated community leaders, the Nashua River has undergone a remarkable transformation into the pristine river we know today,” Hassan said “This legislation will help continue to protect this watershed so its beauty can be enjoyed by future generations.”

Today, a wide variety of plants and animals inhabit this natural resource, including various fish, turtles and birds such as bald eagles among other creatures. Now that thousands of plant and animal species have returned, so to have recreation opportunities for people to boat, fish and enjoy all that the river and surrounding land has to offer. Lawmakers want to see it stay that way.

“This legislation will help our community preserve the Nashua River’s waters and wildlife, which benefits New Hampshire and the broader New England region,” Shaheen said.

She also expressed the importance of protecting the progress made to this point so Granite Staters and tourists can continue to enjoy this waterway for years to come. Echoing her thoughts, Kuster said this is an important step toward safeguarding these resources and habitats for future generations.

“This designation enjoys broad, local support from conservation groups, regional planning commissions and individual towns that have a vested interest in protecting the river system for years to come,” Kuster said.

“We are proud to be a part of a community that shares the natural beauty and benefits of the Nashua River and its tributaries,” Warren added. “Our legislation will help preserve, manager and protect these irreplaceable rivers.”