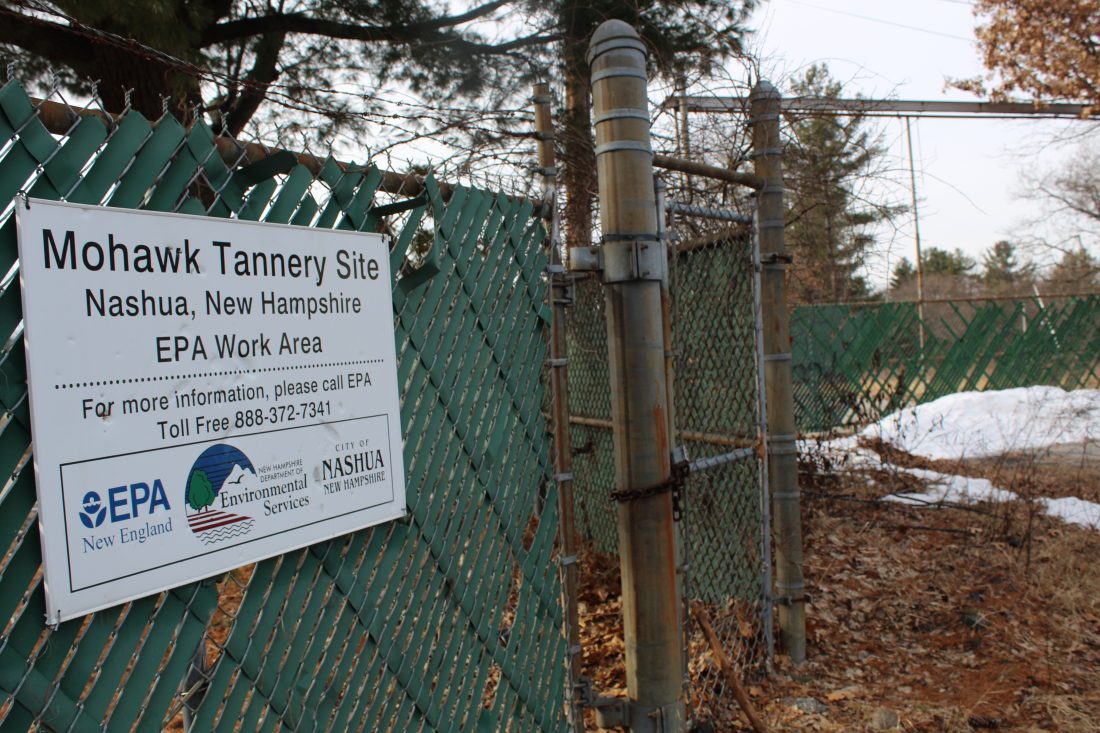 NASHUA – The federal government shutdown stalled progress on the U.S. Environmental Protection Agency’s Superfund site, the Mohawk Tannery, but the developer scheduled a meeting for officials and residents living in the area for for 6:30 p.m. Tuesday at the United Way of Greater Nashua office, 20 Broad St.

Community involvement coordinator for the EPA regional office in Boston Kelsey Dumville said the last time agency representatives met with those from the city was in November for a status check. Since that time, she said there has not been any changes in terms of a decision being made. She said they are looking to meet with the site developer Bernard (Bernie) Plante in the near future. Additionally, the goal is to have an action plan assembled in March.

She said the proposal involves addressing the city-owned properties, as well as the Fimbel Door landfill, and aspects of the EPA’s proposed remedy there. She said there is a lot of ongoing discussion between the developer and the city on ways to best address this, and to determing if there are other alternatives.

“EPA is proposing to remove the material from the Fimbel Door facility to the lagoons,” Dumville said. “They would be held in place with a retaining wall, I believe secant wall.”

She said it is also being proposed to move all the material contaminated with asbestos from city-owned property to the site of the lagoons so the rest of the property can be developed. The EPA has devised a few alternatives to remedy the site at the end of Fairmount Street.

Details on each alternative can be found online at, https://semspub.epa.gov/work/01/627478.pdf.

“EPA’s preferred alternative is Alternative 5, estimated between $8 million-$14.2 million,” Dumville stated in an email. While this is the EPA’s preferred remedy, nothing has been proposed just yet.

This waste encapsulation and impermeable capping alternative relies on the consolidation of all the sludge and soils and encapsulation at the lagoon areas. This would be done by using one of three vertical containment technologies, as well as an impermeable cap over the material. According to the EPA’s description, the vertical containment and cap would be designed to withstand a 500-year flood event. Mitigation structures such as drainage swales would be built on site to compensate for the flood storage loss that might result in a 100-year flood event.

Alternative 1 looks at excavation with off-site disposal, and brings along with it a cost at around $32.6 million. Another alternative deals with on-site treatment and runs around $18.7 million.

“The city, EPA, (New Hampshire Department of Environmental Services) and the developer have all been working really closely on this until last month or so, and certainly anticipate being able to work closely again,” Dumville said.

Dumville said the agency took comments on the three different alternatives, read and responded to each and will take them into account when issuing their final decision. She anticipates to have that decision signed by the end of March, but said Alternative 5 is still their preferred alternative.

“We want to analyze and closely look at all the comments received and make sure we’re considering each of those,” Dumville said.

She said the EPA wants to ensure the decision they make lands them in the direction they need to be in to move forward, and once they issue their decision, the action memo will be put together outlining the work that needs to get done, and how the work will take place. She said no date has been set for the next meeting with all of the agencies, but hopes it will be set no later than the end of March.

“We originally thought work could begin as early as this summer,” Dumville said. “I think it’s more likely that work wouldn’t actually begin until next spring, 2020.”

The former Mohawk Tannery, also known as Granite State Leathers, actively tanned hides for leather from 1924 to 1984, while disposing of tannery process waste in the lagoons. As a result, the sludge and soils in these areas are contaminated with heavy metals, dioxin and semi-volatile organic compounds. The site consists of two parcels, roughly 15 acres each, at the end of the Fairmount Heights and Little Florida neighborhood.

Members of the North-East-West Nashua Civic Association shared a photo of an email Plante distributed dated Jan. 30 on their Facebook page. In this, he invites officials and neighbors to a meeting to discuss an environmental update and redevelopment use for the three properties, Mohawk Tannery, Fimbel Door and city properties.

Nashua Alderman Tom Lopez said this meeting is focused on those residing in the area of the tannery to gather their insights on how they would like to see the area be developed. Plante said it will bring people up to speed on what is happening. He arranged this meeting with Lopez in order to keep neighborhood residents informed on their progress.

Right now, Plante said work is underway on the design on the environmental resolution and land use design. He suspects the EPA will not propose anything until late March.

“We anticipate that they will accept the secant pile system alternative, but they have not made a final decision,” Plante said. “They were delayed because of the government shutdown.”

“At this point, I think we’re going to get that input, firm up the design and get prepared to meet again with those agencies,” Plante said.