Suspect allegedly broke into 100-plus cars 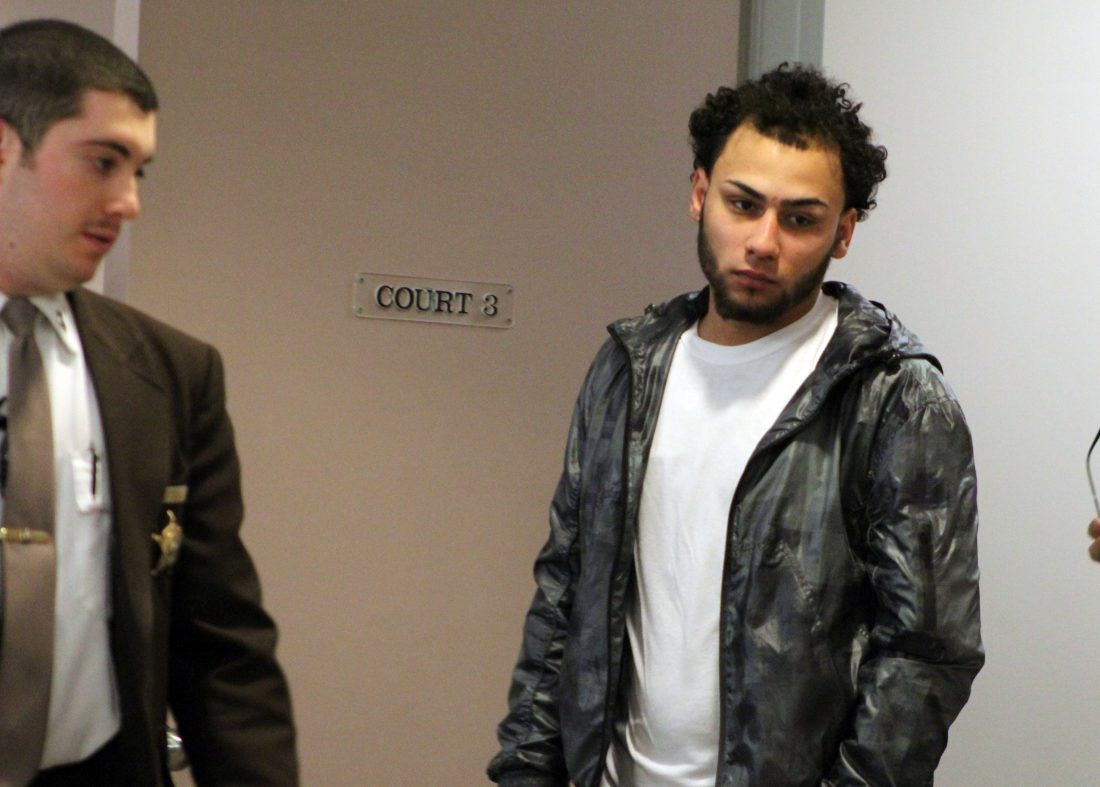 Telegraph photo by DEAN SHALHOUP Rafael Rodriguez, charged with receiving stolen property, enters court Tuesday for a bail hearing. He was ordered held on preventive detention for the time being.

NASHUA – Speaking with police after his arrest Monday on a felony charge accusing him of smashing a car window and stealing a GPS unit, Rafael Rodriguez estimated he has broken into upwards of 100 vehicles during the past three months, a prosecutor said in court Tuesday.

Rodriguez, 25, who reportedly lives with a family member in a downtown Nashua apartment, told police he allegedly committed the entries to steal things he could pawn or otherwise sell to support his drug habit, Assistant County Attorney Brett Harpster added.

Harpster spoke at length during Tuesday’s bail hearing for Rodriguez, detailing a criminal history that includes a litany of arrests and some 15 convictions on various offenses.

Not only does Rodriguez have an extensive record, Harpster said, he is currently out on bail on five additional cases, which he said include allegations of burglary and possession and sale of heroin or fentanyl.

The new charge, receiving stolen property, accuses Rodriguez of having in his possession an allegedly stolen iPod, which police located while searching him after Monday’s arrest.

The process of taking Rodriguez into custody presented a bit of a challenge for police, according to Harpster’s account. He said officers, after speaking with the woman whose car was broken into, allegedly by Rodriguez, headed over to a Spit Brook Road apartment complex to try and locate Rodriguez.

On the way, they passed a car in which Rodriguez was a passenger, and although Rodriguez “ducked down” in his seat, police recognized him, Harpster said.

Upon seeing police, the unidentified driver of the car allegedly sped out of the parking lot, but police were able to catch up and stop the vehicle.

While the driver was arrested for fleeing, Harpster said, other officers took Rodriguez into custody.

When police asked about the iPod they found on him, he allegedly told police he bought it from a friend for $10. He allegedly admitted he knew it was stolen, and, according to Harpster, told police he often buys stolen merchandise “because it’s cheaper.”

The items stolen from vehicles during the three-month spree of break-ins have a collective value of $30,000 to $50,000, Harpster said, citing a police estimate.

Attorney Jeff Odlund, a public defender who represented Rodriguez at Tuesday’s bail hearing, said Rodriguez has been recommended for Nashua’s Adult Drug Court, but limited resources have delayed the process.

In asking Judge Charles Temple for personal recognizance bail, Odlund said that while Rodriguez has a lengthy criminal history, the only matter before the court Tuesday was the charge of receiving stolen property.

Odlund argued the state’s fairly new statute prohibiting judges from setting high bail for defendants with limited means comes into play in this case, telling Temple that Rodriguez must be deemed dangerous to himself or others in order to be held on preventive detention.

“There is no evidence Mr. Rodriguez presents a danger to himself or others … he cannot be deemed dangerous,” Odlund added.

Noting Rodriguez’s “underlying drug issue,” Odlund said personal recognizance bail would give Rodriguez the opportunity to get the treatment he needs.

Harpster, in response, challenged Odlund’s contention that Rodriguez doesn’t present a danger to the community.

“How can he be deemed not dangerous, when he (allegedly) broke into 100 cars in just three months,” Harpster said, adding that the alleged spree is “an ongoing pattern” that has put “a high amount of anxiety and stress on the community.”

In ordering Rodriguez held on preventive detention, Temple, the judge, cited several reasons for his decision, among them the fact that one of Rodriguez’s arrests is for a drug-related offense accusing him of either selling, or giving, another person drugs on which the person overdosed – in a main hallway just outside Temple’s courtroom.

“It’s pretty clear to me that your life is spiraling out of control, and something has to be done at this point,” Temple told Rodriguez.

Temple said he would consider reducing Rodriguez’s bail to personal recognizance if, and when, he is admitted “to an appropriate substance use disorder treatment program.”

He told Rodriguez to continue the Adult Drug Court screening process, with the goal of being accepted.

“Based on what I’ve seen, Mr. Rodriguez, I think Adult Drug Court is the right place for you,” Temple added.