There’s a new game in town: ‘Dodge the Pothole’ 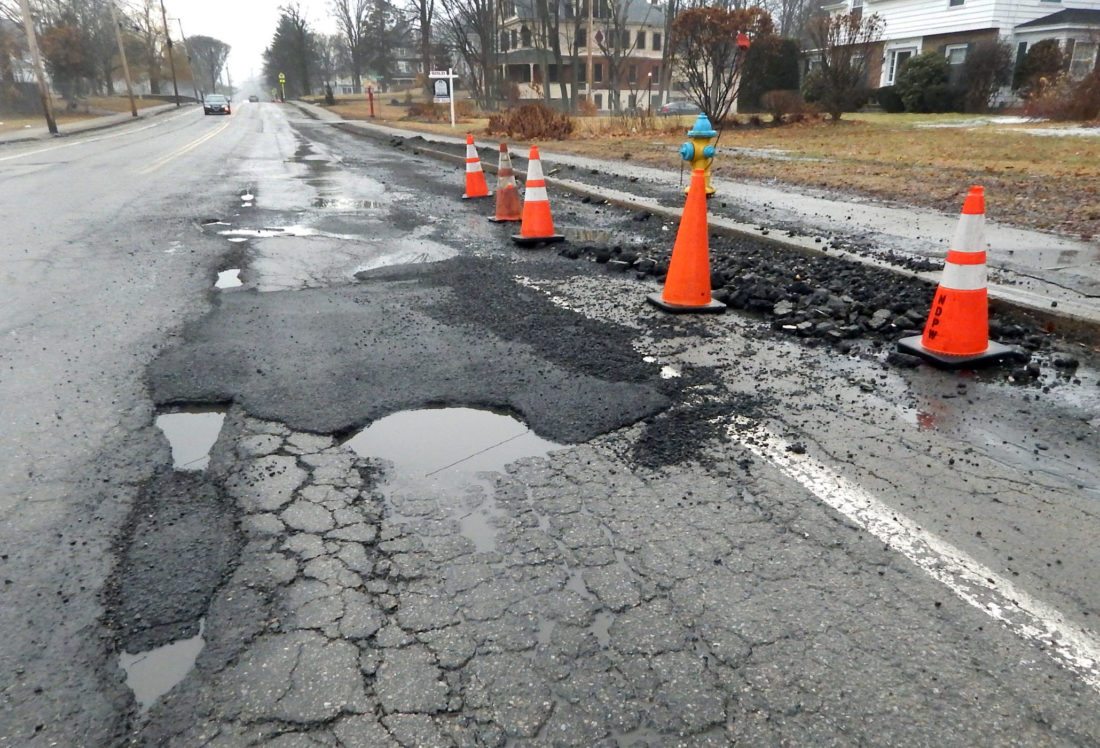 Staff photo by Dean Shalhoup A pothole "cluster" along the northbound lane of Concord Street between East Stark and Beasom streets has been filled several times by public works crews, but it keeps deteriorating because of heavy traffic.

They’re a lot like those one or two insufferable relatives we all seem to have: As long as you don’t have to deal with them, they’re fine.

But when they decide to visit, even when you sort of expect they may show up, you find yourself uttering words and phrases that you didn’t even know were in your vocabulary.

And then you realize that no matter how much you try to avoid them, the second you let down your guard, another one suddenly appears right in front of you.

I speak of the insidious seasonal scourge known as pothole proliferation, an at once fairly predictable and sneaky invader that afflicts only road pavement – but counts millions of motorists among its collateral victims.

Mercifully, pothole proliferation doesn’t strike every year, but it certainly had this season on its calendar.

Typically a late-winter, early-springtime thing, it crept in early this year, invited by premature spates of melting snow seeping into whatever void it can find in the pavement surface, then hanging around until it gets cold enough to freeze again.

If I remember science class accurately, water expands by something like 10 percent when it freezes, and because it takes the path of least resistance, the ice goes right back up through the pavement as it forms.

That makes the little crack a big crack, which in turn becomes a little hole, which, upon becoming a big hole, earns the distinguished title of pothole.

It seems to me there should be a couple more rungs on the pothole’s career ladder, such as the rank of “crater” for the occasional over-achieving pothole.

This season’s frequent rainstorms have exacerbated the freeze-thaw-freeze again cycle, Nashua Mayor Jim Donchess told me the other day.

Combine that with the fact that the condition of Nashua’s streets has declined over the years, and it’s not surprising how we got to this point.

Donchess said that while the city’s multi-million-dollar paving project is cued up and ready to go, work can’t begin until temperatures stay above freezing.

That’s typically mid- to late-April at best, so until then the only thing crews can do is fill as many potholes as they can, a process called cold-patching.

“It’s just a temporary fix, but it fills holes until the weather gets better,” Donchess said.

I mentioned to the mayor the two city streets that come to mind when someone says “pothole” – Kinsley and Concord streets.

Both, he assurred me, are on the 2018 paving season agenda. Kinsley, often a challenge to negotiate anyway, is in decent shape from the overpass to St. Joseph Hospital, but once you start coming down the hill it’s time to peel your eyes and take a deep breath.

Dodging – a common avoidance trick – is impossible on Kinsley Street, unless you love hearing a cacophony of car horns.

Up on Concord Street, start getting ready once you pass Orange Street. We’re not talking a pothole here and there, we’re talking clusters of them, which seem to have spawned a couple new additions each time I go by.

One resident, who lives near the intersection of Beasom Street, came out when he saw me looking around the other day.

“They keep filling them, but they open up again,” he said, referring to cold-patching crews apparently waging a valiant battle against a multitude of forces.

“Everytime a truck goes by it shakes the whole house,” the guy told me as he set off for his morning walk.

If you want to report your “favorite” pothole, there’s a link to an app on the city website, www.nashuanh.gov, and look under the “I want to …” link.

In the meantime, keep on dodging; paving season – like baseball season – is just around the corner.

Dean Shalhoup’s column appears Sundays in The Telegraph. He can be reached at 594-1256, dshalhoup@nashuatelegraph.com or @Telegraph_DeanS.