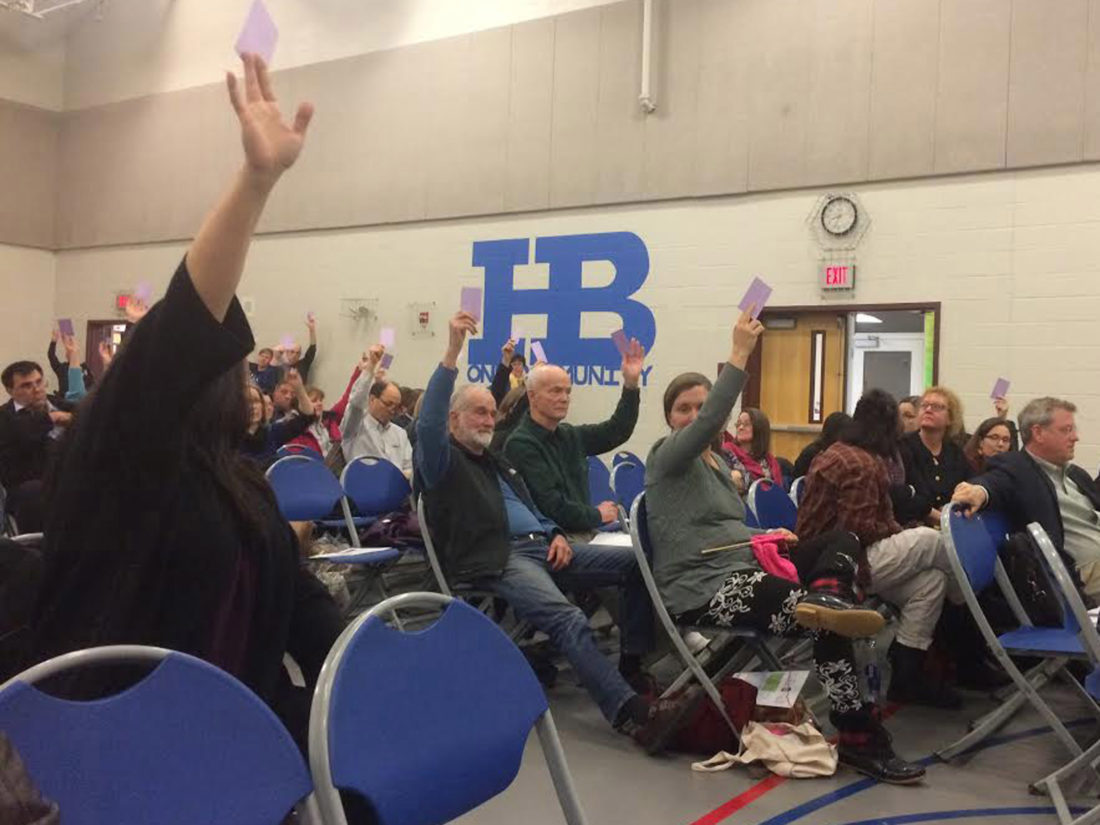 The energy lease was one of nine warrant articles recommended by the School Board and Budget Committee, all which were approved with little pushback by voters during the Hollis School District annual meeting.

The meeting didn’t address the middle or high schools, because they are part of the Hollis Brookline Cooperative School District.

Total financing for the lease is not to exceed $3.26 million, and it will fund a variety of heating and energy efficiency improvements for both Hollis Primary School and Hollis Upper Elementary School. Annual payment will be $326,015 for the first five years – or $108 on a $400,000 home – and will increase by a dollar for the last five years.

Last year, Hollis voters approved an energy study for the two schools. The engineers who conducted the study underlined serious energy-efficiency issues and proposed suggestions to address them.

Those energy improvements include 100 kW solar panels on the rooftops of both schools.

Additionally, at Hollis Primary School, in each classroom, window area will be reduced, new windows will be installed and air source heat pumps will be added as the primary heat source, as well as other measures.

At Hollis Upper Elementary School, improvements will include new high efficiency propane boilers, improvements to the ventilation system and insulation of gaps between the wall and ceiling.

Most of the questions asked by voters during the public comment period were about specifics that members of the school board or its lawyer and budget committee were able to answer.

For instance, resident Brandon Buteau asked why there is an escape clause built into the lease that would technically allow for the town to back out of it.

Board lawyer James O’Shaughnessy clarified all municipal leases must have an escape clause; though he said returning used equipment purchased with money from the lease would be impractical.

“In reality, the escape clause is kind of a fiction,” O’Shaughnessy said.

Resident David Sacks complimented the board and engineers for their “very thorough work.”

“This will really extend the life of our schools,” resident Anna Birch said.

After the majority voters held up their ballots to approve the lease, many clapped in celebration.

Another key article passed by Hollis voters Tuesday night was a “Sanbornized” two-year contract between the board and the Hollis Education Association. Sanbornizing is the process of disclosing the length of a contract so that it does not have to be renewed annually, as would be required otherwise by state law.

The contract will increase teacher salaries by 2.5 percent each year, or the equivalent of 6 percent for teachers who receive a pay step increase.

Board Chairman Robert Mann said the two parties agreed to such a significant pay increase so that the district’s salaries, which are currently below those of competitive districts, would be on parity with those districts.

Jim Belanger, a resident and Hollis town moderator, spoke out against Sanbornizing and said that it’s a “New England tradition” to vote on contracts each year.

David Sacks took to the podium next and said that he was previously against Sanbornizing, but has since come around to it because it frees up the town’s boards so they can focus on other things instead of having to develop a new contract each year.

During the public input period for the operating budget, resident Brandon Buteau expressed concerns about transportation problems that he said the school district has had lately.

“If we want to be the best school district in New Hampshire, we’ve got to have transportation to get our kids to school,” Buteau said.

Superintendent Andrew Corey said that the transportation problems have been due to staff shortages, not funding issues, and that a new driver joined the district that week.