Tajci, Waking Up in America, at Nashua High School North 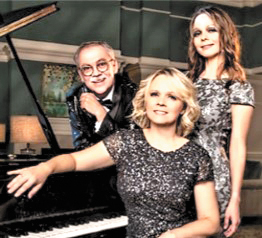 The performance will take place at Nashua High School North, 8 Titan Way in Nashua, at 7:30 p.m. on Nov. 1.

Cameron, an award-winning music artist and former Eurovision Song Contest finalist from Croatia, was a pop superstar by 19. She achieved platinum status while selling more than a million records and packing sold-out venues for many of her performances.

At 21, she moved to New York City, where she has performed in theater and cabaret houses. She composed, produced and toured extensively; founded a children’s theater in Cincinnati, Ohio; wrote and launched a full-length musical, “My Perfectly Beautiful Life” and produced and hosted the TV show “Waking Up in America.”

A graduate of the American Musical and Dramatic Academy, Cameron demonstrates her versatile musical ability through a variety of genres, including pop, jazz, country and spiritual. In addition to singing, she plays keyboards, guitar and accordion.

Singer, songwriter, actress and flautist Matejas, a daughter of a respected guitarist, vocalist and sound engineer for a national radio, had a childhood of music and performing.

In her teenage years, she was employed by Zagreb Repertory Theatre as a singer and actress. She released four solo albums in Croatia by the age of 20 and was a successful actress in television and film. Early into her 20s, Matejas moved to Los Angeles, where she continued her music and acting career. Her work includes Disney movie “Holes,” “King of Queens,” “Days of our Lives” and two national tours as one of the lead vocalists with the Trans Siberian Orchestra. Mateyas formed a hard rock band, Duda Did It, that played at clubs around Los Angeles in the late 2000s.

Keyboardist Hanson is a rare combination of artist and entertainer. His style is best described as elegant pop piano, with occasional crossovers into the wonderful worlds of jazz and country. Whatever the genre, he passionately plays the best loved standards with a unique combination of artistry and style – all infused with a great sense of humor

A family man of many interests, he has extensively toured the U.S. with his one-man piano show, written original music that has played around the world, produced and directed a feature-length documentary and still finds time to add to his ever-increasing vintage vinyl record collection.

The remaining 2019-2020 season for the Nashua Community Concert Association will feature vocalist Judy Pancoast: “All My Best Memories: Built by the Carpenters” on Feb. 28; the Maxwell Quartet on March 22; and Sail On: A Beach Boys Tribute on April 28.

Tickets may be purchased online at www.nashuacommunityconcerts.org or at the door.

SPRINGFIELD, Ill. (AP) — In 2007, Springfield’s gleaming new shrine to Abraham Lincoln was open, but it lacked ...

Thunberg ‘surprised’ to be Time Person of the Year

NEW YORK (AP) — Under pressure from a conservative advocacy group, The Hallmark Channel has pulled ads for a ...

LOS ANGELES (AP) – Despite a fresh injection of four big movies into the marketplace including a Stephen King ...