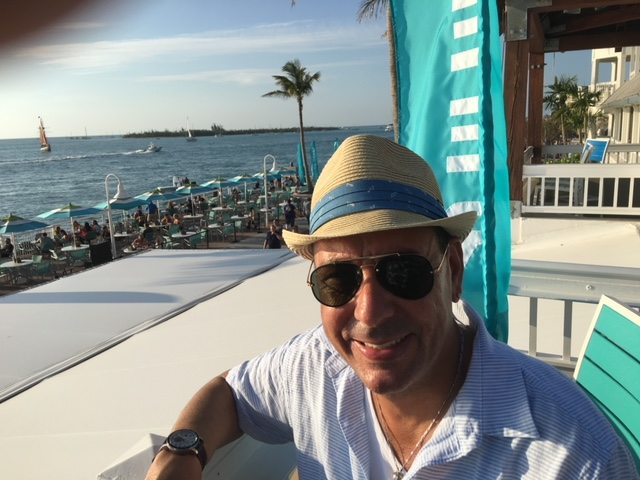 First, let it be known that I’ve been razzing the hell out of my friends back home, as I beeline through the streets of Key West, sending texts and posting pictures to Facebook as I hop from bar to bar, stopping into some of the local haunts and rediscovering a few hidden gems.

And while the island of “Old Town,” has been gentrified, thankfully much of the original charm has been maintained. There are still dogs wearing shades and pirate hats, colorful locals decked out in shades and rainbow boas, roosters walking down Duval and the many side-streets, pedi-cabs dragging tourists around the island and bartenders that can spin yards from here to the mainland.

I was also reminded of a few old factoids about Key West, that I thought I would share with you:

* Cayo Hueso was the original name for Key West, which means “Island of Bones.” The term “key” comes from the Spanish word “Cayo,” meaning “small island.” Early native inhabitants used the island as a mass graveyard, causing it to be littered with bones. There are two things I draw from this: One is, if you have ever danced in a club in Key West, you were literally dancing on someone’s grave; and two: I think the original name of Key West should have been “Dolor En El Culo Para Llegar A,” which translates to “pain in the a- to get to.”

* In 1882, Lt. Commander Matthew Perry sailed the schooner Shark to Key West and planted the U.S. flag, claiming the Keys as United States property. Perry said he was amongst friends, as Chandler, Monica, Rachel, Ross, Phoebe and Joey all agreed.

* After Florida was transferred to the United States, the island of Key West was sold to U.S. businessman John W. Simonton for the equivalent of $2,000. Simonton then built four green homes on a small but important property and then tore down the four green homes and erected a tiny red hotel. And by chance, he kept his money in a community chest.

* In 1928, Ernest Hemingway is said to have written a part of “A Farewell to Arms,” while living above the showroom of a Key West Ford dealership at 314 Simonton St., while waiting for the delivery of a Ford model roadster purchased by the uncle of his wife Pauline; that uncle also bought the couple the house at 907 Whitehead St. as a wedding present in 1931. The Hemingway House was the first home in Key West to boast running water, a swimming pool and a kickin’ shot gun collection.

* Hardware store owner Chares Thompson introduced Hemingway to deep-sea fishing; Joe Russell (also known as Sloppy Joe) was among the group of friends who fished and was reportedly the model for Freddy, in Hemingway’s “To Have and Have Not,” his only novel with scenes set in the United States. Thompkins’ fishing group had names for each – Hemingway’s was “Papa.” Other popular nicknames in the group included, Spanky, Alfalfa, Buckwheat, Darla, Froggy and Pete the Pup.

* Today, the Hemingway House is home to more than 60 six- or seven-toed polydactyl cats descended from Hemingway’s original pet “Snowball,” who had an alien paw growing from its forehead and was not an attractive cat. Even mice weren’t afraid of “Snowball.” Frequently the mice would stand on each others’ shoulders, only to high-five Snowball’s alien hand growing out of his forehead. This made Snowball a bit of an outcast.

* Playwright Tennessee Williams is said to have written the first draft for “A Streetcar Named Desire,” while staying at the La Concha Hotel in 1947. Two years later, Williams bought a modest bungalow at 1431 Duncan St., which he listed as his primary residence until his death in 1983. Friends said he was forever bothered by tourists, asking him to sing, “16 Tons.” “That’s Tennessee Ernie Ford, you morons,” he’d often reply.

* Jimmy Buffett first came to Key West in 1971; but his famed song, “Margaritaville,” was not penned in Key West, but rather Texas. The libation-lauding song he wrote in Key West, titled “Green Creme de Mentheville,” sadly, never took off.

Key West has a lot of philosophies that are prescribed by locals and extended to the visitors. The infamous Green Parrot bar sums it up best: No Sniveling.

Words to live by.

George Pelletier may be reached at gpelletier3@gmail.com

Today in History for May 23